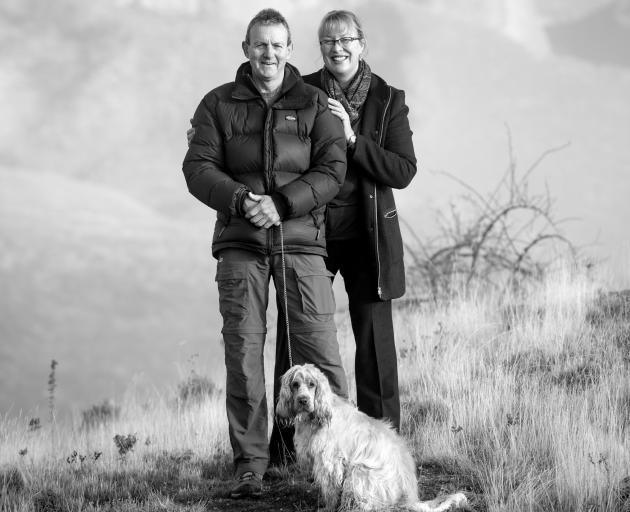 Central Otago photographers Eric Schusser and Annemarie Hope-Cross share their cancer journey in a new exhibition. PHOTO: TIM HAWKINS
As Eric Schusser and Annemarie Hope-Cross are both photographers and a couple they are in a unique position of being able to put on paper the journey many go through as sufferers and carers dealing with cancer. They tell Rebecca Fox about the journey to their joint exhibition "Thursday’s Child".

Taking a photograph was sometimes the only thing Eric Schusser could do to stay calm while his wife Annemarie Hope-Cross was undergoing cancer treatment.

Whether it was the road markings or cones he stared at when going for walk while Hope-Cross was in surgery or curtains surrounding her hospital bed while she recovered, it helped.

"When life gets hard I’d usually head to the snow, head to the bush, but this time I ended up in big urban areas so I couldn’t do that. I had to find other ways."

Schusser is known for his landscape photography of wide, open spaces, but the cities where Hope-Cross received treatment meant shifting his focus to their urban, industrial landscapes. 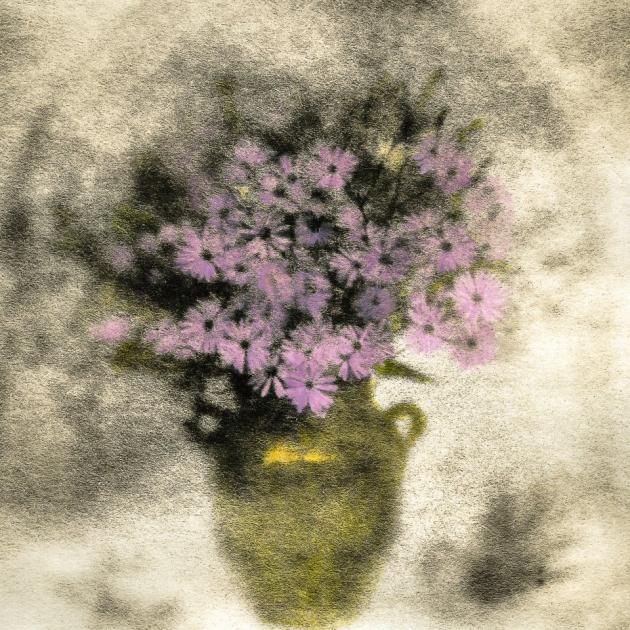 "I had a lot of time on my hands, so going for walks, taking pictures made things easier. They’re more urban gritty, not like my normal photographs at all."

These photographs form part of a joint exhibition "Thursday’s Child" and books Still Intrusion and Dissolving Margins with Hope-Cross which follows their three-year journey dealing with her breast cancer and relapse.

Schusser, a former outdoor education teacher, and Hope-Cross met through their work about 10 years ago — he as a ambulance volunteer and she as an ambulance officer and bonded over a common love of photography.

"I’d moved down from Auckland and Eric’s mum was my first patient on my first day."

Both grew up in families where photography was a big part of their lives. 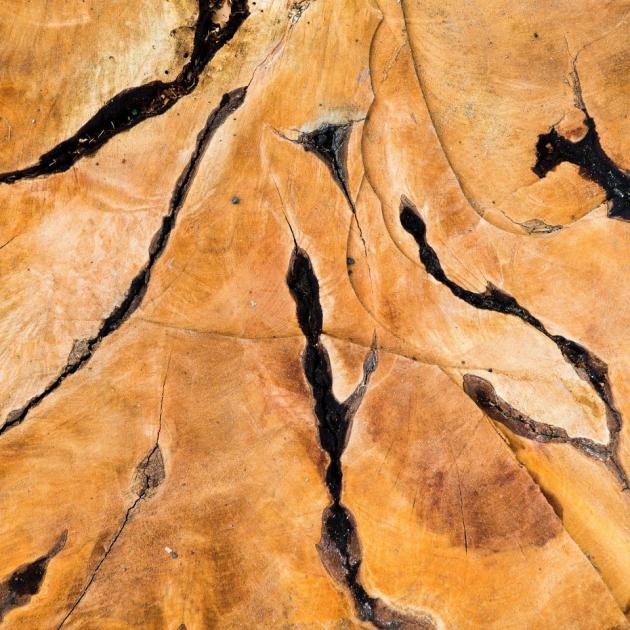 One of Hope-Cross’ earliest memories was of her grandfather’s Taupo darkroom and then her father built one in their family home.

When her father was travelling, she would occasionally sneak into the darkroom, losing herself in experimentation.

"It didn’t end in too many disasters. I didn’t blow the house up, so that was good. But I could lose almost days in the darkroom."

She went on to do a diploma in photographic arts after school which was geared towards commercial photography, something she found was not really her after a few years in the industry.

When she moved to Alexandra in 2008 she unpacked some booklets her father brought back from overseas about early photography.

They caught her eye and she began researching. She found a course in the United Kingdom at Lacock Abbey, the home of England’s first photographer, William Henry Fox Talbot.

"So on a wing and a prayer I went over there to pursue this thing that seemed really interesting and learnt about the really early photographic processes."

Sitting in a barn in a village in Wiltshire learning to coat paper and make images she had a "light bulb" moment.

"I thought this is what I want to do with the rest of my life."

She returned to Alexandra determined to continue the practice, searching out the chemicals and materials she needed to do it, which were very hard to come by in New Zealand.

"I had to adjust things to what I could get here to make it work. It has been a fairly solo journey."

Invited back to do a residency at Lacock Abbey in 2013, she further refined her processes.

Hope-Cross uses three historic processes that date back 180 years to create her images. Her mousetrap camera is set up outside in her back garden. It takes six to eight hours to create the images and a lot of hoping the weather does not change in the meantime.

"It can be fraught with peril but it’s the part I enjoy. It’s serendipitous but nothing is guaranteed in life."

She loves the process because it is tactile and she loves paper in all its different textures.

"I’m outside, which is very important to me. There is a contemplative nature about it I love. I like to take my time, think about what I’m doing and why."

She then hands over to Schusser to do the "technical stuff".

"I run a mile from that stuff. Eric takes the paper negative I’ve made, scans it and makes it into something fit to hang on the wall. It’s a very much a joint programme."

Schusser also got his love of photography from family. In his case his father, a fitter and turner by trade, was a hobby photographer.

He helped his father build a darkroom under their house. Being small he was sent into the tight spaces to dig out the earth for the room.

Memories of going for walks around Wellington’s south coast with his father centre around photography, as there was often a camera and tripod with them.

While he loved teaching — clocking up 36 years — he always took a camera with him in the outdoors or when travelling.

When he took time off to look after his father who was ill with Alzheimer’s, he had the chance to do an advanced diploma in photography at Massey University.

Like Hope-Cross, he found the course more commercially driven, which did not fit with his passion.

However, a chance to do an exhibition project in Wairarapa, where he interviewed a person who lived there and took photographs of the places that were important to him, enabled Schusser to find what he liked doing the most.

"I loved the process and it inspired me to go down the exhibiting line."

So he did a series of interviews and photographs with ambulance officers and volunteers from different stations around the country which formed his first book and exhibition.

While Schusser and Hope-Cross have different approaches to their work — digital technology versus heritage methods — they offer each other feedback and suggestions.

They have both found Hope-Cross’ cancer diagnosis — she has a rare triple negative, aggressive form — has had an impact on their work.

"While it’s been a terrible thing, it’s opened up doors for both of us," Schusser says.

Hope-Cross has been unable to work so she has been able to focus on her love of photography.

"In a weird way it has freed her to focus on what she has always wanted to do."

The morning after Hope-Cross discovered she had breast cancer she woke up with the Heidelberg Apotheke pharmacy museum in her mind.

It was for the images of bottles that she received an "honourable mention" for in 2017 her entry in the international Julia Margaret Cameron Awards and three of her images appeared in the "Women Photographers Today" exhibition in Barcelona, Spain.

It was also during this time they put together their first joint book Still Intrusion.

"It was healing, a way of coping as well as documenting our journey."

For Schusser, as the carer, it has been important to show that often unsung and very lonely part of the journey.

"There is not a lot out there from the carer perspective. It’s a human story which so many can relate to. So many of us have dealt with cancer in our lives — it’s a universal connector."

Hope-Cross says the support person is so important to a sufferer but asks who cares for them?

"Eric is the one who had to keep it together, he’s the sane one when I’m full of chemo or whatever. Carers don’t get the support the patient gets but they are also going through a terrible time, just differently."

They are thankful for their medical backgrounds which have enabled them to research and understand more of what she faced.

When Hope-Cross discovered last year that cancer had come back, this time to her lymph nodes in her neck, the couple faced more surgery and treatment. She is now doing well, although struggling with lymphodema and fatigue.

"Coming back to the photography helps you re-group, gives you a positive focus."

She has tried a new process, hand painting some of her works just as they would have done back in her grandfather’s day.

"I really enjoy working with the images that way. You can’t afford to get it wrong."

Dissolving Margins is the result of their journey through the second bout of cancer.

"We built on what we did before. It keeps us going."

Schusser says it has brought the couple closer in different ways and made them look closely at what is important in life, what they value and want to do with their time.

"Both of us realise nobody knows how long they’ve got. So it’s important not to waste time, do the things you want to."

They have their spot in North Otago where they like to retreat after treatment and surgeries to recover.

"We call it our artists’ retreat. We can focus and relax. In a weird way it has given us choice in how we want to live our lives."