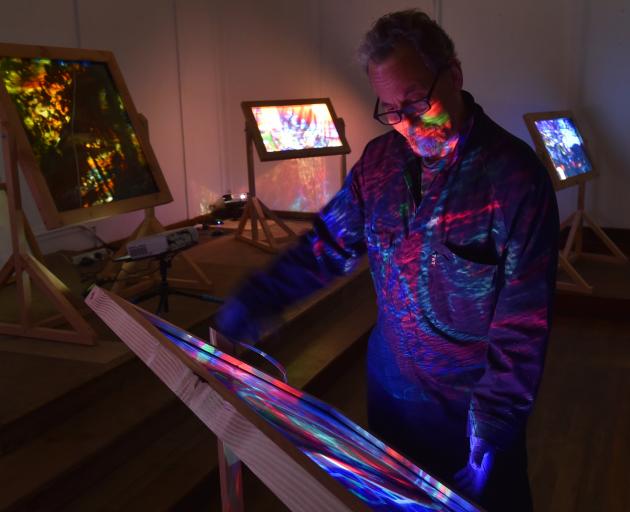 Port Chalmers artist David Green with his work. PHOTO: GREGOR RICHARDSON
Dunedin’s George St has often been swathed in the projections and video installations by David Green. This time it is the space of Port Chalmers’ Anteroom he is transforming, he tells Rebecca Fox.

Swathes of well-used vineyard netting, hand-blown glass and noise and sound artists do not necessarily point to a David Green exhibition.

But Green is always keen to push the boundaries in text and image as has been seen in recent times in his works Bruno’s Thin Skin, 1954 and Time and Tide where fragments of digital video filled George St shop-front windows and in some cases spilled out into the street.

In his new seven-channel video installation Songs of Rupture he wanted to take the process a step further adding sound and additional material to the fragments of video being projected.

Each work is a part of a larger PhD project as he enjoys doing the theoretical in relation to the practical.

"They really do open things up for each other and I find it gratifying to work in that way". 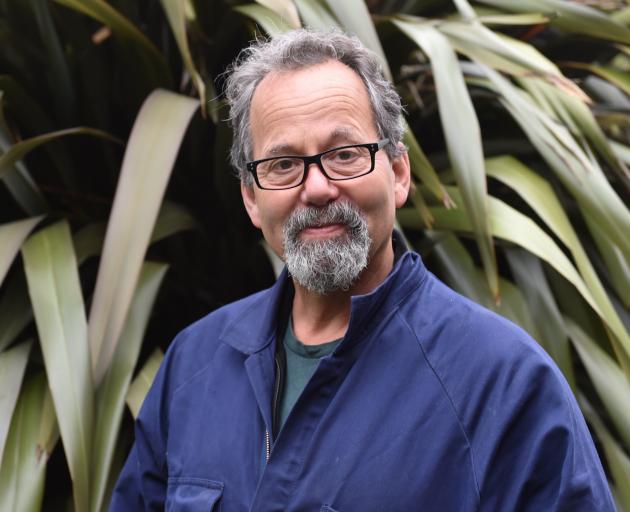 PHOTO: GREGOR RICHARDSON
His PhD in film and media communication centres around disarticulated cinema — pulling apart the way moving pictures work such as the old hollywood model of a linear narrative.

"When you have something fed to you in a very clean way, first of all its easy to be influenced by that because it’s convincing, but it’s a kind of system of organised delivery."

Green believes it is far more interesting to produce fragments of information allowing viewers to assemble it in the same way they do all sorts of information they gather and assimilate every day to create meaning.

"What I try to do is make work that activates my thinking and suggests different ways of putting things together which is gratifying in different ways. "

He says the work is not an absolute delivery in the way of film. 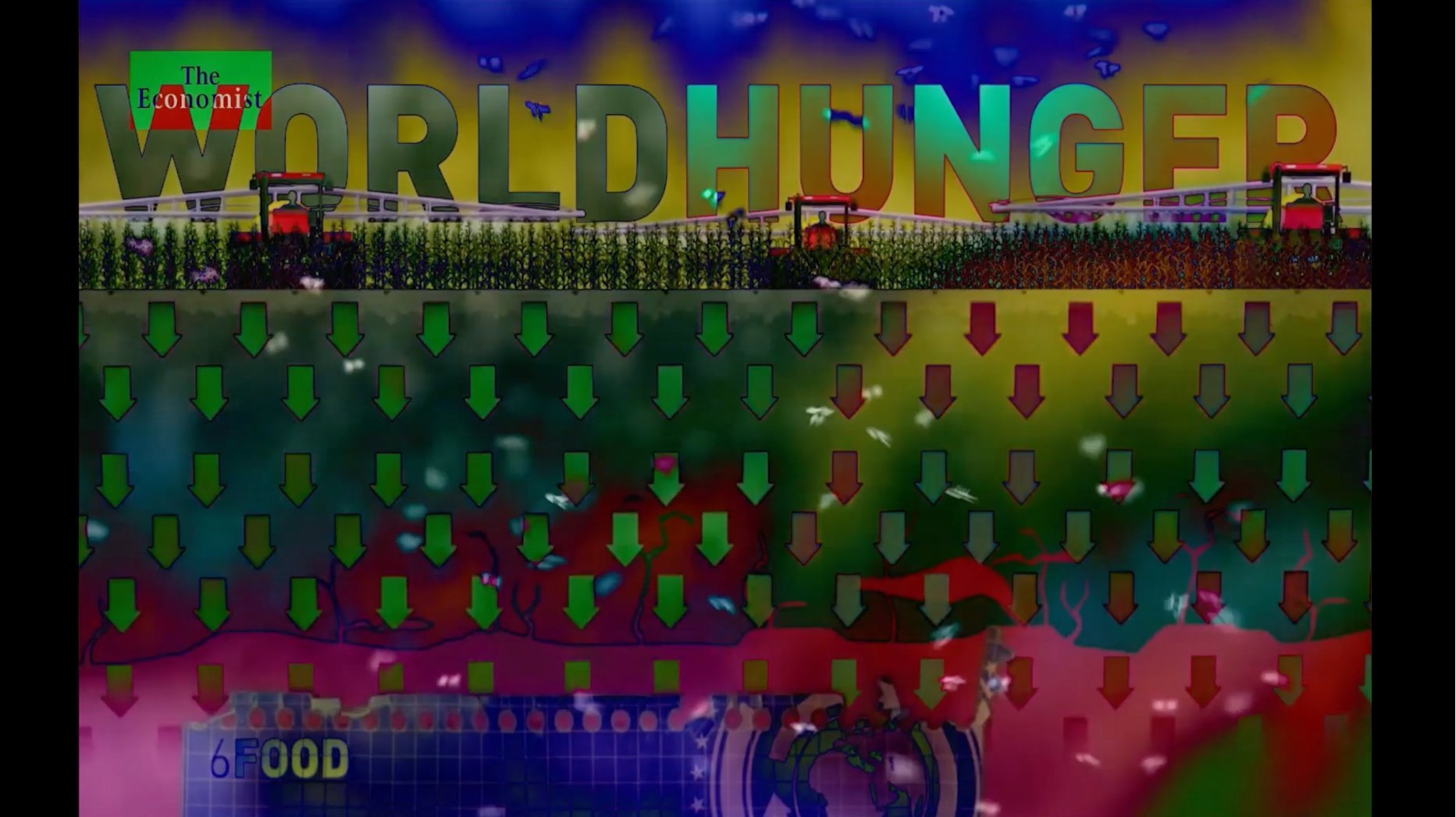 Screen shot taken from Songs of Rupture by David Green. PHOTO: SUPPLIED
"There are no answers, just better questions."

At the heart of the work is the climate crisis and the idea of humans as a species trying to breach boundaries just like life constantly does can led to imbalance whether it is genetic modification or travel in to space.

"All of these technologies and breaches on every scale have led us to climate change, but there are all sorts of other things going on that affect our wellbeing."

So the installation features six different stations each taking on a different topic such as microplastics, air travel, animal to human viruses such as Ebola and Covid-19, fracking and gene editing.

At each of the stations, the video will be projected through sheets of hand-blown glass from Germany which has been framed "almost in a plinth-like arrangement" which breaks up the image and creates reverberations and reflections to create another way of looking at the same material.

"The glass holds the images really well, but the light and images also transmits through. As you are looking you will see them covered in images which will travel past them up to the rafters of the Anteroom which is a former masonic hall."

While humans are constantly trying to breach boundaries they are also trying to create ways to intentionally separate things as well. Such as former United States President Donald Trump’s wall at the boarder with Mexico. 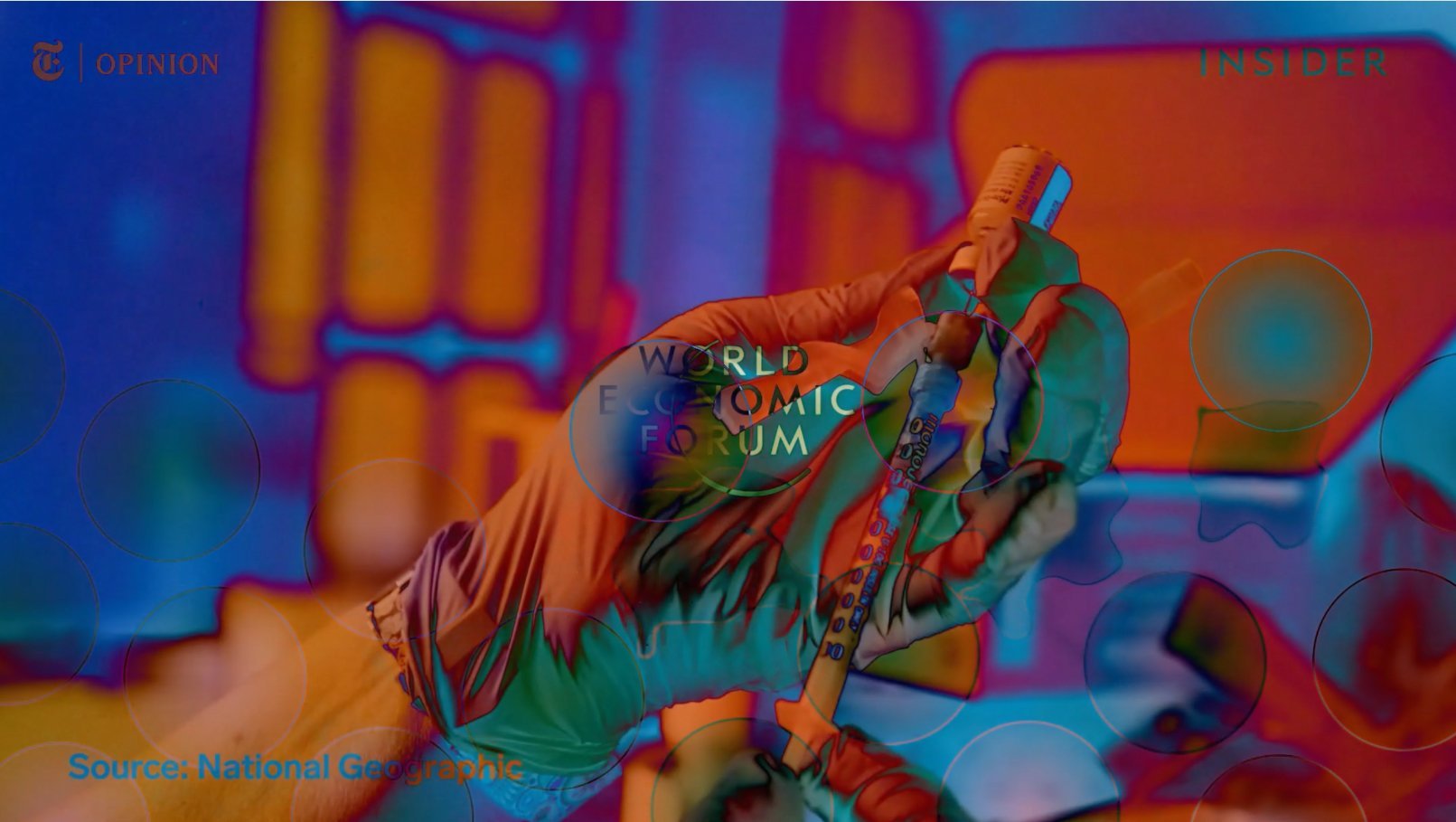 Screen shot taken from Songs of Rupture by David Green. PHOTO: SUPPLIED
So in response to that, Green has has sourced netting from an Alexandra vineyard, complete with holes and greenery or "ruptures".

"I want to hang that as a kind of diffuser, as a defractor. The idea of defraction by Karen Barad is reading one thing through another. That is also what is happening here with these video mash-ups — you are reading the content of one through another."

He also looks at the "current state of the media" and the way people have accesses to information via the internet featuring many well-produced videos put out by different interest groups.

"They form a kind of noise in our head. If you are locked into the algorithms you are probably hearing the same voice over and over but if you look you can find different videos that contrast with each other."

So he has "mashed up" some of these video clips and set them against each other "fragmenting each other through that process".

"You start to see relationships between the fragments bubbling up through it, it’s a kind of a pattern.

"The way I put them together you see everything, but you cannot see it all at once so you see different fragments, and audio ties you into certain portions." 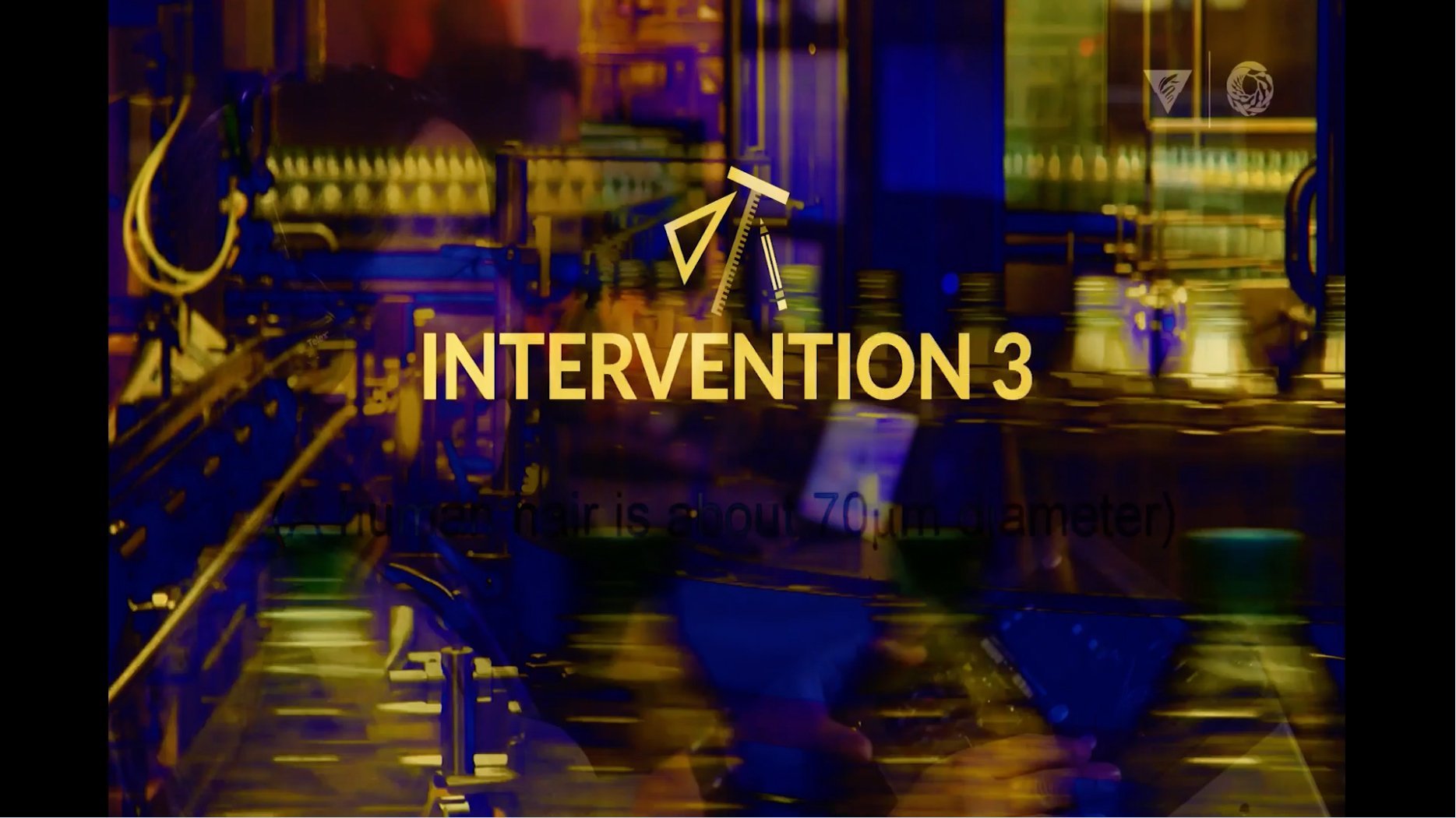 Screen shot taken from Songs of Rupture by David Green. PHOTO: SUPPLIED
Adding to the experience will be music produced by local noise and sound artists. Green asked his son Ro Rushton-Green, a musician and sound artist, to co-ordinate a group of sound artists to respond to the installation as groups and individuals.

"It’s going to be fun, very much like a performance. It takes the installation and turns it into something more than just one thing. It will give me more to think about and learn."

Green wants people to see the issues differently and encounter information in a different way.

"It’s very much an experiment of how these elements come together and how the fragments add up to this feeling — it is a comment on the media as much as anything."

One video features the recent media coverage of billionaires going into space — Virgin boss Richard Branson, and also that of his competitor Jeff Bezos, which were "mediated" in exactly the same way, Green says.

"The whole structure of the way they present them is almost locked in step. It’s amazing. I’m not doing a lot of "talking" to make things fit in."

Green, a former American, worked in movie production and advertising in the United States and in New Zealand before he joined Otago Polytechnic’s Dunedin School of Arts as a lecturer in electronic arts, so he knows the industry. 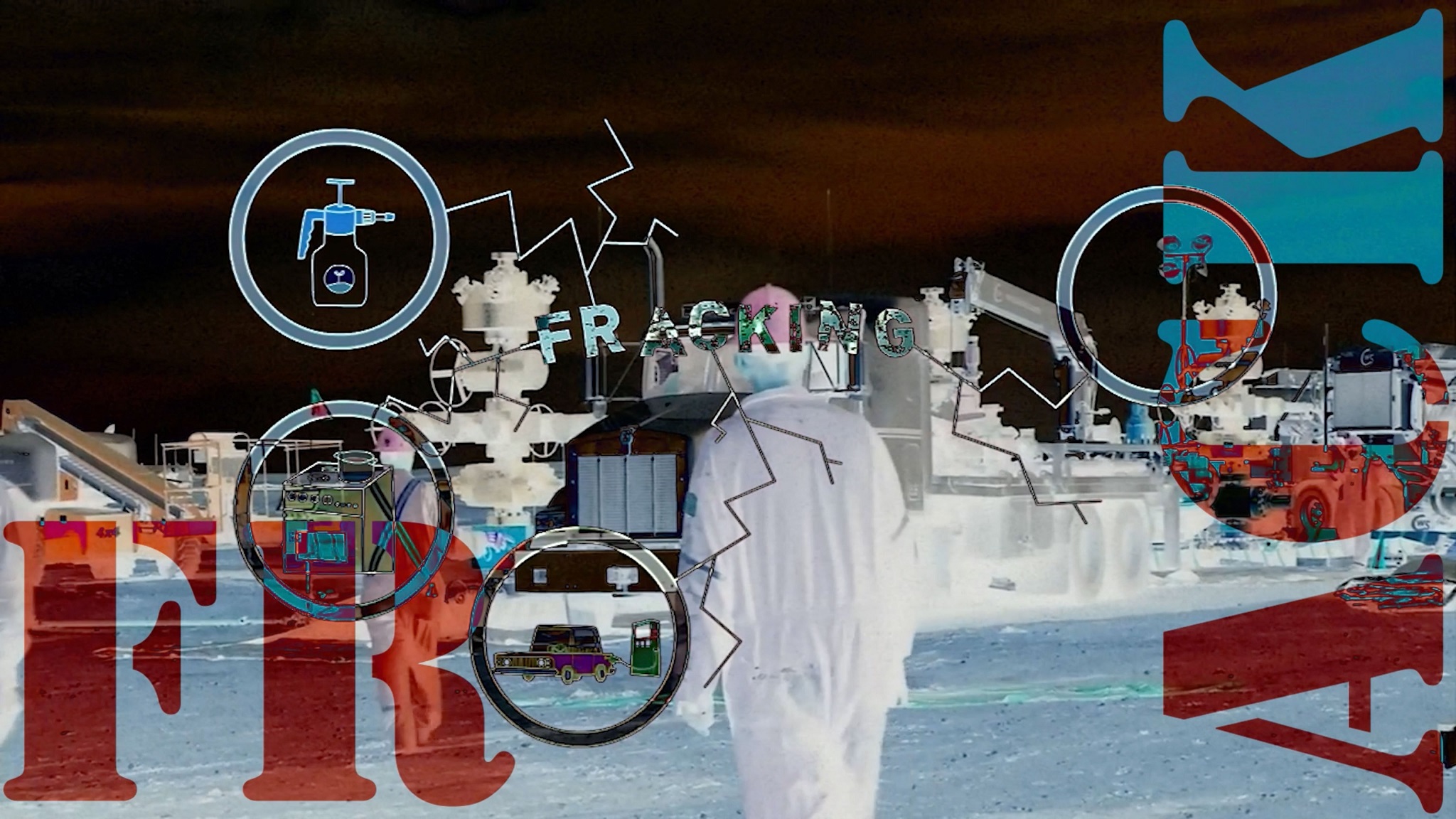 Screen shot taken from Songs of Rupture by David Green. PHOTO: SUPPLIED
"It’s very much operating against the Hollywood model where you shine everything, you put it into space, place it correctly, so your argument gets made. So when I’m working I do a little bit but I’m loath to get into that kind of crafting of the media. I want it to play out as it plays out.

"When you run these things against each other you have these beautiful interacting moments between totally different pieces of media. "

He hopes people will be able to gather the images in the installation rather than feel they are being pushed at them.

"Let brains work. If you keep your brain stimulated, you have a happy brain. If you are constantly being fed this mediated stuff of motion images and things that come through social media space I think it’s hard to engage your brain, your brain goes into reception mode.

"I want brains to gather, the way brains gather when you walk through the bush, do the things we do as humans and understand what is mediated."