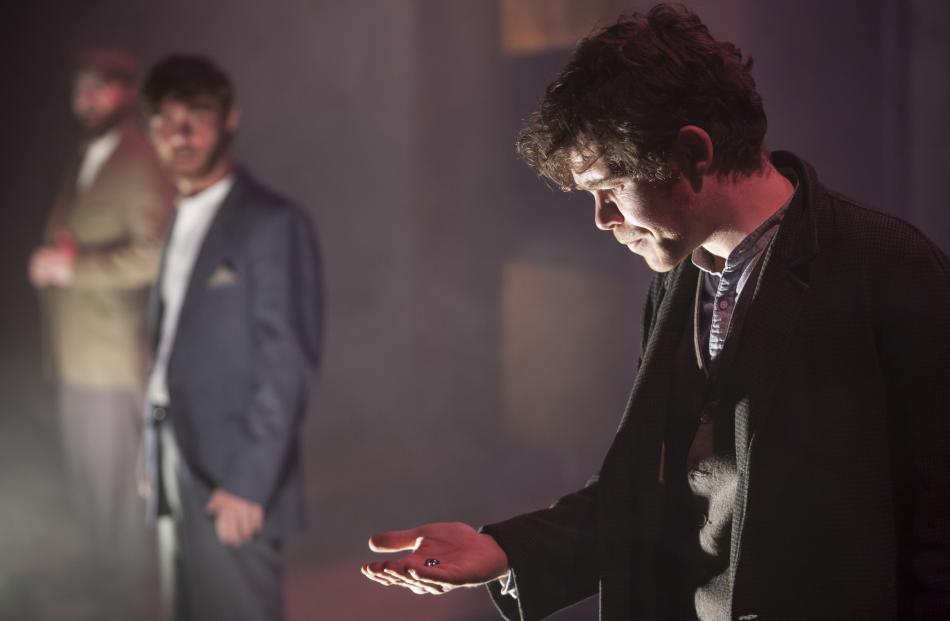 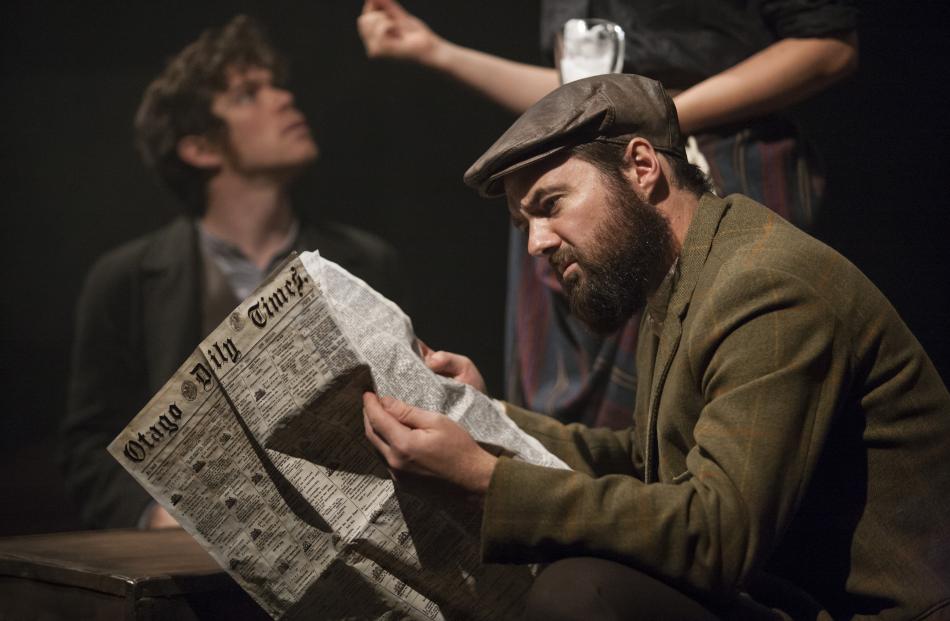 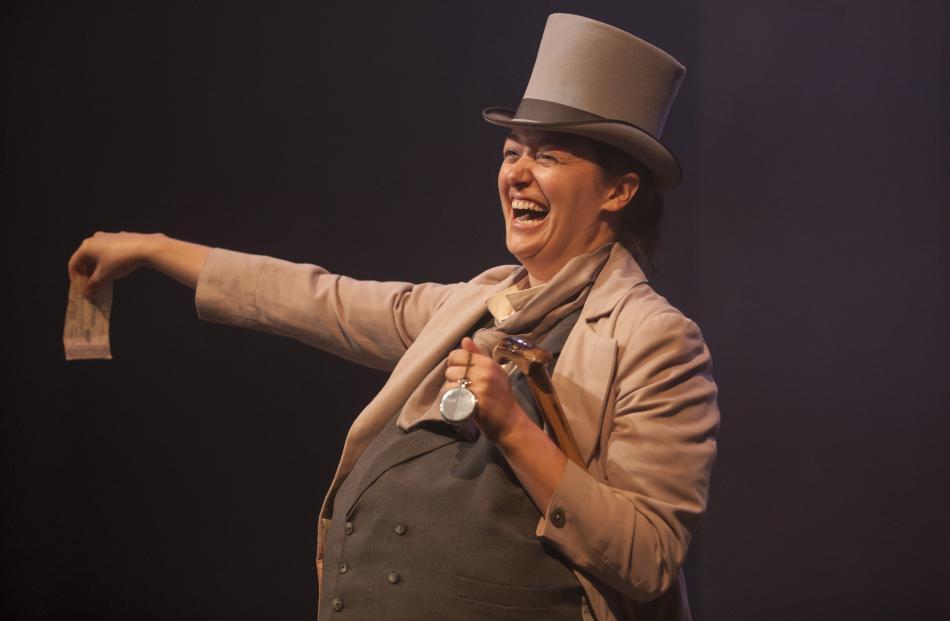 The mark (Anya Tate-Manning) is unaware he is a con artist’s next target in colonial Dunedin, where the worlds of rich and poor brush up against one another. PHOTO: MATT GRACE 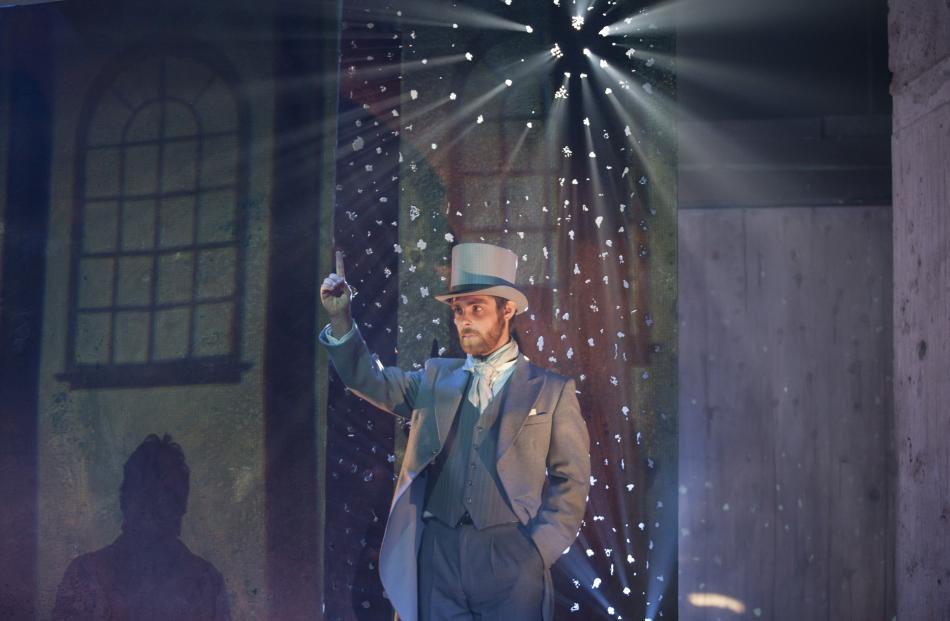 A dark, magical tale of betrayal, greed and love comes home when The Devil’s Half-Acre hits the Fortune Theatre stage at the weekend. Bruce Munro talks to Trick of the Light’s Ralph McCubbin Howell and Hannah Smith about their universal play set in Dunedin’s goldrush-era slums.

Hannah Smith grew up on the edge of the Devil's Half-Acre, only vaguely aware of its infamous history.

It was not until she and fellow playwright Ralph McCubbin Howell visited Toitu Otago Settlers Museum that they found out about the 19th-century Dunedin slum bounded by Princes, Maclaggan and Maitland Sts. What the couple discovered was a multicultural cauldron jammed into a disreputable triangle of slum dwellings, brothels, sweatshop factories, opium dens and gaming houses, the perfect setting for a play that had been just waiting to happen.

"The idea for a story about two con men who come up against seemingly real magic was one we'd been brewing for years,'' McCubbin Howell says.

"This grew into The Devil's Half-Acre when we learned about the slum ... It's such a rich time period to draw on, a melting pot of cultures and classes and fortunes.''

They researched the play and McCubbin Howell wrote the first draft during a residence at the Robert Lord Writers' Cottage in Dunedin.

"We were there in the depths of winter, and spent a lot of time at Toitu and the Hocken Library - in no small part because those places provided ample heating - where we found fact and anecdote to weave into the script.

"It's always been a setting that I've found uncanny: so recent, yet so foreign; a familiar landscape in an unfamiliar configuration, when Dunedin was the country's powerhouse and gold was the primary resource.''

They also spent a lot of time walking the city and taking in the landscape: up and down the streets of the one-time Devil's Half-Acre, out to the site of the former Vauxhall Gardens, around the harbour edge and through the Town Belt.

"This gave a flavour and atmosphere that informed us as much as historical fact: the city itself became a central character in the play.''

The Devil's Half-Acre tells the Faustian tale of two con artists trying to survive in the underbelly of goldrush-era Dunedin. Their luck seems to have turned when they are commissioned by the mysterious Mr Pilgrim. But reality may be much grimmer than the lives they hoped they had left behind.

"The story draws upon some classic myths: the deal with the devil and pursuit of untold fortune,'' McCubbin Howell says.

"But these play out in a historical world, and audiences will spot references to real events and characters from Dunedin's early history. The setting is a time and place that seems to lend itself to mythologising: great fortunes were being won and lost, travel was hard and communication limited. Dunedin really was an outpost at the end of the world. That said, while it draws on historical fact, it's been stretched and skewed into fiction.''

The later 19th century was a formative period in New Zealand politics. And, because Dunedin was the country's financial powerhouse, it was where "a lot of the action went down''.

"Our story features the debate on Separation [from the North Island]. There was a great deal of manoeuvring as the argument rumbled on: promises and fearmongering, allegiances forged and then broken.

"At the time there was much less transparency, so political leaders got away with some shocking abuses of power. I was particularly struck by the story of James Macandrew, who was superintendent of Dunedin around the beginning of the gold rush. He was arrested for debt while in office, but then issued a proclamation declaring his own house a jail, from where he continued to govern.''

Julius Vogel was another key character of the period.

"He was a real power-broker in the city at the time, a prominent councillor, editor of the Otago Daily Times, and spearhead of the Separation movement.

"Vogel's a fascinating character, and all else aside, appears to have been a brilliant opportunist. In our play, he looms in the background as a symbol of political power who eventually crosses paths with our protagonists from the slums.

"The Otago Daily Times was the country's first daily newspaper, and Vogel used it to advance the Separation movement. I'm a sucker for hyper-realistic props, so one of my favourite jobs was reprinting an 1860s issue of the paper, which appears in the show.''

A number of themes in the play still resonate strongly, including one contemporary link that emerged only after the play was written.

"The setting offered parallels to our own time and place: institutionalised poverty, housing shortages, and the wealth of the many in the hands of the few remain pressing issues today. The debate on South Island Separation forms a background to the story, and since the first season, the Brexit vote has provided another parallel. The more things change, the more they stay the same.''

Smith grew up in Dunedin, just off High St, and then in Northeast Valley. Her mother now lives in Melville St, in the heart of the former Devil's Half-Acre.

While attending Logan Park High School, Smith took drama classes at the Globe Theatre, in London St, where she was also involved in several theatre productions.

She went north to study theatre at Victoria University in Wellington. There, she and McCubbin Howell met and began creating plays together.

McCubbin Howell was raised in North Canterbury and attended Burnside High School, in Christchurch. He got into theatre through his parents, beginning by performing alongside them in local musical productions.

At school, he found Shakespeare and improvisation theatre and then went on to perform with The Court Jesters at Christchurch's Court Theatre.

After Victoria University, he spent a further year training at the Bristol Old Vic Theatre School in the United Kingdom.

The pair then formed Trick of the Light Theatre, demanding attention from the beginning.

Their first project, The Engine Room, was based on the protests in New Zealand during the 1981 Springbok tour. It won McCubbin Howell the Chapman Tripp Theatre Award for outstanding new playwright.

Their second production was The Road That Wasn't There, a fairy tale set in Central Otago. Premiered at the Edinburgh Fringe Festival 2012, it won outstanding New Zealand play, most promising director and production of the year at that year's Chapman Tripp awards.

The next year, more awards were won for Broken River, which was about freshwater and irrigation issues in Canterbury.

The Bookbinder was toured around New Zealand and Australia, where it was given an International Excellence Award at the Sydney Fringe Festival.

"Since coming back from the UK in 2012, we've had a great run, and have been able to make a living from making and touring our own shows,'' McCubbin Howell says.

"It is pretty amazing getting to travel the world showing off your art,'' Smith adds.

"Though the reality is much less glamorous than I had imagined.''

The couple love to present stories from their home turf.

"Both Ralph and I are from the South Island, and spend a lot of time travelling about the South,'' Smith says.

"It seems to us that South Island stories are under-represented on New Zealand main stages as it stands. Also, I find the landscapes very beautiful and inspirational, particularly around Central Otago, where there are such bare hills and big skies.''

Another distinctive feature of Trick of the Light is the use of theatrical effects. They have developed an aesthetic through their previous fantasy works that McCubbin Howell describes as "a sort of `sophisticated lo-fi' that incorporates shadow-play and puppetry alongside live-action''.

In The Devil's Half-Acre, they chose to add another dimension.

"This took the form of a large AV component, with silhouette projections designed by Meg Rolland and Charley Draper. The use of video allows us to work on a larger scale and create effects beyond the cardboard cut-outs that we've used before.

"That said, we thought a silhouette aesthetic really lent itself to the shadowy world we wanted to create, and tied back to the shadow-play we've worked with in the past.''

Asked why they choose to use these theatrical devices, Smith responds with: "Because it's theatre.

"The contract with the audience is different on stage than in other mediums.''

"The audience and the performers create the show together. The audience bring their imagination to the experience and help us to make moments that transcend the reality of people sitting in a room.''

"It's been a blast,'' McCubbin Howell said.

Julius: It's a fine first run, but the name? How about 'Otago Witness'?