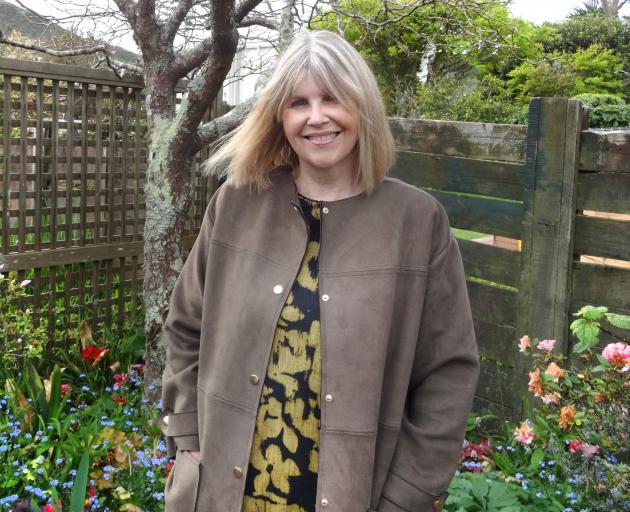 With crayons and watercolours in hand, Ghislaine Howard cannot resist sketching the people around her as she sits in a cafe. 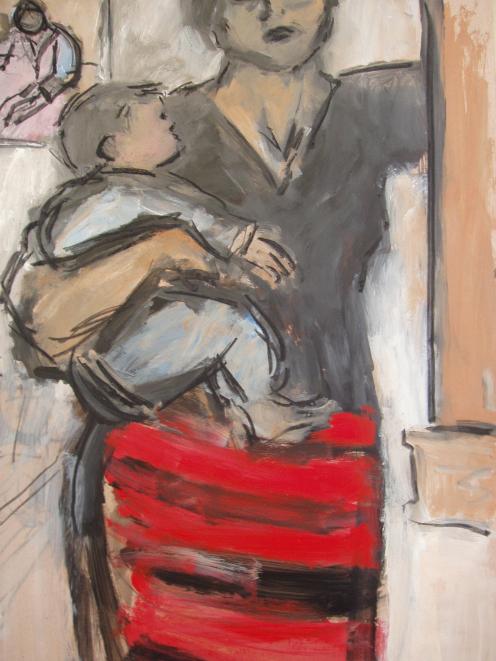 At the Easel with Cordelia.
A prominent British figurative artist, Howard absorbs the movement and gestures of people around her along with the galleries and sights of the places she visits.

''It's quite an injection of inspiration; a kind of fresh way of looking at things. It gives me renewed zest to get back into the studio when I get home.''

As a painter, her work is based on what she calls the ''shared human experience''.

''We all inhabit a body and all feel certain things in a similar way - joy and sorrow, love and how we express that.''

The approach grew out of an experience she had as a child noticing the back cover of a book her father was reading. On it was a black-and-white picture of Van Gogh holding his head in his hands.

''I remember being so moved by it. It made me feel so sorry for this old chap it made me cry. I asked my dad about the drawing. He said Van Gogh is an artist who paints about feelings and I remember clearly thinking that it was what I wanted to do.

''Whenever I did a drawing and showed it to anybody, I used to ask 'Has it got feelings? Has it got movement?'. It has always attracted me.''

As the saying goes, an artist can only really paint themselves, and Howard inhabits a woman's body, so sees the world from that point of view.

Triptych My Mother Walking
''I've always been fascinated by the figure.''

Her work starts from her own experience and then moves into the ''wider world''. 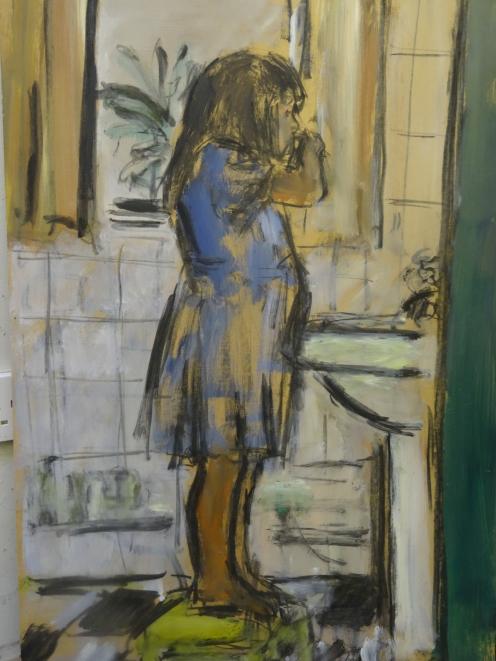 Cordelia Brushing Her Teeth
When pregnant with her first child in the 1980s, she thought it was the most obvious thing in the world to draw and paint that experience.

''My body was changing, I was was changing, I was going to become a mother for the first time, and my mother a grandmother. It seemed to me the most evident thing to do as an artist was to make drawings charting those changes. For everybody it happens to, it is a momentous thing.''

She looked for role models in paintings with similar subject matter, but found very few at that time.

''It was 1984. At that time women's subjective experience had been marginalised really and it was just a time when questions about gender were just beginning to be asked.''

When an older woman saw Howard's drawings and said ''I know how that feels'', it struck a chord with her, and Howard knew she was on to something.

She also drew herself during her second pregnancy in 1987 - one of those works was included in a 2014 exhibition at the British Museum ''Ice Age Art / Arrival of the Modern Mind'' sitting alongside small sculptures of women's forms from 30,000 years ago, some of the earliest known representations of the human figure.

''It was extraordinary to have that link with women. It was a very moving experience.'' 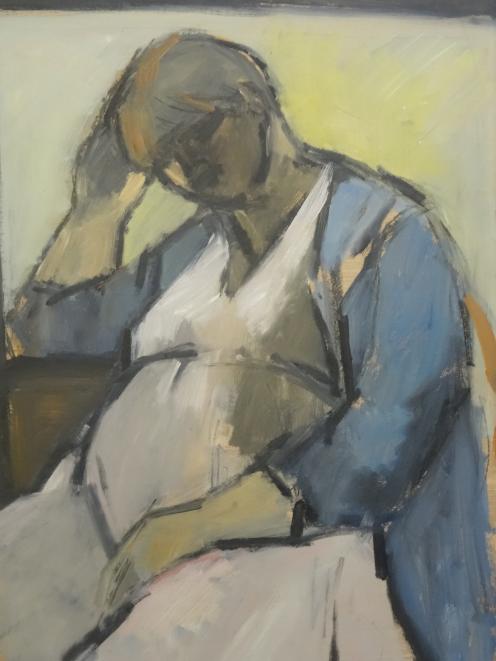 Pregnant Self-Portrait, July 1984.
Having made those works of herself being pregnant and as a mother, she looked to the wider world and spent four months as an observer in a maternity unit where she visited anti-natal clinics, delivery suites and special care baby units.

''When you are going through it you don't see what is going on. The people who are giving the care, the people with the extraordinary knowledge looking after the women and babies.''

One of her pregnancy works from 1984 is to be included in a major exhibition, ''Portraying Pregnancy'', which opens in January in London. The exhibition will include works from Tudor times to the present day.

When her large birthing paintings were first shown in public galleries in the 1980s, there was a segment of the population that found them shocking and confrontational, but most people were happy to see a woman's body portrayed in a ''gritty, real kind of way'' instead of a sensational or glamorous way, she says.

Howard, who was named a Woman of The Year in 2008 for her contribution to art and society, has recently drawn and painted her son and daughter-in-law going through their first pregnancy and the birth of her first grandchild.

''It's wonderful sense of it coming full circle.''

Recently she has painted her mother, who has Parkinson's. Those paintings have been included in a major exhibition in the United Kingdom.

''I've been told people have been moved to tears by the paintings as they have recognised someone they've known. It has touched them deeply.''

Howard (66) is in New Zealand as part of a lecture tour with the Decorative and Fine Arts Society and will speak in Dunedin on a ''female artist's perspective on women artists''.

''Are there distinct qualities in work by women? Looking at paintings they have done on similar subjects, do they see it differently? Of course women can paint incredibly powerful strong paintings and men can paint very delicate and sensitive ones.''

The fact she is a woman has given her permission to do work a male might not, such as a maternity ward or women's refuge.

''In an age like ours, questions of identity and gender and how they are represented in the world are prevalent and we are very sensitive to it. It's an interesting time.''

As part of her research, she has had the ''thrill'' of discovering Dunedin-born artist Frances Hodgkins, who travelled extensively in Europe and lived in England.

''Her reputation in the United Kingdom has kind of disappeared a bit. Her work is just exquisite.''

Howard was quite taken by how, in a letter to her sister in New Zealand, Hodgkins talked about ''getting a train to the Peak District, most likely the town which we live in, Glossop, saying how she had never seen countryside so dreary with wind and rain''.

''It made me smile. We know what she means. It isn't always like that.''

When Howard returns home it will be to the opening of ''Love is a Rebellious Bird'', a retrospective of her work by film-makers and visual artists Al and Al, in Northwest England.

They have selected 100 of her works, some that have not been shown before, covering 1984 to the present day and including works depicting her new grandchild.

''It's a thrill. Normally they work with incredibly high tech stuff, so they are thrilled to be working with paintings for the first time.''

As she travels New Zealand, she is receiving computer-generated images of what the exhibition will look like. Alongside her paintings will be video installations of poetry, stuffed birds and music.

She will also get back into her home studio and her routine of painting, which begins mid-morning each day with a small painting inspired by an image in The Guardian newspaper - a footballer, someone holding a child or a scene of devastation. The series is known as the ''365'', which began in 2006 after the London terror attacks the previous year.

''It's a way of working into the day, bringing something from out in the world into our personal world. Usually the criteria is that it has to move me in some way. It can be a gesture. These works feed into the rest of my day.''

Howard is working on a major series of work based on a very old sequence the ''Seven Acts of Mercy'', which goes back to Medieval iconography - essentially a religious concept, give drink to the thirsty, food to the hungry, clothes to the naked, welcome the stranger, visit the sick, visit the imprisoned and bury the dead.

''I've been making studies over the past few years for this. It's the overarching theme for many of the works I'm making at the moment so giving a drink to the thirsty - somebody making a cup of tea or an image from The Guardian of somebody drinking from a well in Africa - it's all feeding into what will be seven monumental canvases.''

Much of Howard's life has been detailed in a monograph of her work Ghislaine Howard: The Human Touch by her husband Michael, an art historian, writer and artist.

The prospect was quite intimidating for Howard given her husband has written about artists such as Van Gogh and Cezanne and required her to reassess her early motivations.

''We're still married, we're still speaking. It was quite an intense experience and obviously we've known each other for a very long time.''

As it is the couple's first visit to New Zealand, they are enjoying seeing the sights for the first time.

''You see the country in a different way. You get shown around by people who live here, which means you get a really different feeling for the country.''