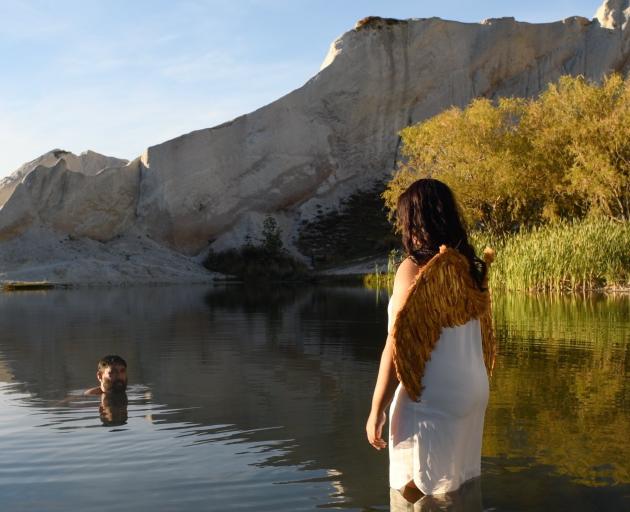 Christopher Ulutupu takes a swim at St Bathans, watched by his sister Fame Ulutupu in her angel costume. PHOTOS: COURTESY OF ARTIST
Christopher Ulutupu took the opportunity to become a tourist while the Dunedin Public Art Gallery Creative New Zealand Toi Aotearoa Visiting Artist. He and his family toured the region searching for inspiration for his film work The Fall, he tells Rebecca Fox.

One day on a shoot, video and performance artist Christopher Ulutupu looked around him slightly bemused. In one direction, his mother was setting up lights and across the way, his brother was hooking up the sound boom.

Various other family members were doing their thing around them and Ulutupu, who is of Samoan, Niuean and German descent, realised his family was really well equipped to take on any film project.

"They can work any of that gear."

It seems it has become second nature for his family and friends to pitch in with his work but it has not always been that way.

Ulutupu originally hired actors to play the characters essentially inspired by his family in his video works.

"It got to the point where I thought I should just cast family members, the people I’m inspired by, and I’ve not looked back since."

His family were slightly reluctant to start with as they struggled to see what he was trying to do.

"At first it was really hard. They were asking what is going on and why. Now the interesting thing is they really love the experiences they are able to have."

It is not only family he ropes in but his friends and members of the community, anyone he might run into at a cafe or party.

They often inspire ideas that come to him in daydreams or, mostly, dreams at night.

"I come up with a scene and I imagine friends and family in these different scenarios.

"I feel like I dream about it first, then work out how to make that happen.

"I get my family and friends to do these absurd, funny scenes that are juxtaposed together.

"It’s a strange process but I really enjoy it.

"It’s not about reality or trying to be true to anything; it heavily lives in fantasy and the thin line between what is real and what is not. It’s OK to exist in fantasy. 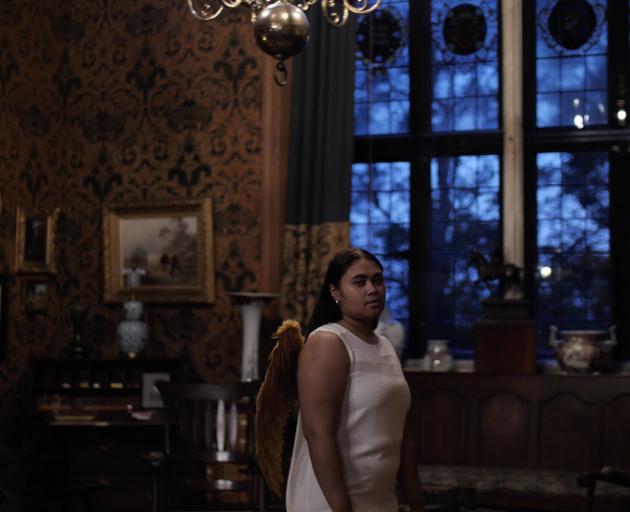 Image from The Fall.
"I’m much more productive working in that realm. Otherwise I’d be making documentaries about my family and that’s a different process.

"I can do those things, but for me it’s more interesting thinking what the potential future looks like, what potentially could happen."

He has found his relationships with his family have changed as a result of his practice.

"I think they understand me more as a person and individual and vice versa.

"My family are very busy, they work hard. When I was growing up as kids, we didn’t have a chance to talk about colonisation but my practice allows some of those conversations to arise.

"I really love the experiences we are able to have."

For his time in Dunedin he was accompanied by his partner, Haz Forrester, who does all his filming for him, and his 19-year-old youngest sister Fame Ulutupu, who helped with the research and performed in the video.

"We went for drives all across Central Otago, Queenstown and around this area, scouting out locations and getting a feel for the landscape — a lot of my work evokes landscape and history around different landscapes.

"While I was there as a resident, I felt like I was a bit of a tourist."

Much of Ulutupu’s practice is based on research and writing about being a tourist and the similarities between that and being a migrant in a new country.

"Out of that conversation I’ve created a series of video works reimagining performances in these tourist spots across Aotearoa."

They have filmed on top of Mt Lyford in Canterbury in the snow and around Nelson’s tourist spots.

"It can vary in response to the landscape, the situation and the people. That’s how I come up with my ideas."

For Ulutupu, a highlight of their journey around Otago was a visit to St Bathans.

"I was amazed by the ruggedness of the landscape, the hills and the colours. 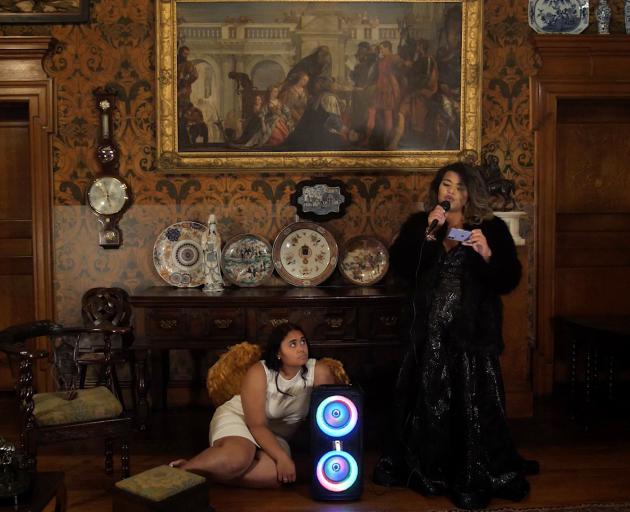 Image from The Fall.
"I’m really influenced by painting practices and I started to understand why people like Grahame Sydney and Rita Angus paint these landscapes — there is such a different feeling to it.

"Even the city of Dunedin, I felt there was a different feeling there."

"People were lovely and invited us to come see these places, go on fishing trips.

"It’s such a dynamic landscape and so many hills."

His new work The Fall has a end-of-the-world-type theme and is based on two books of similar titles that have influenced him — a children’s biblical book his father gave him, The Wall That Did Not Fall, by Marilyn Lashbook, and The Walls Do Not Fall by H.D., a post-World War 2 collection of poems based in London.

The "dark biblical story" told the tale of a warning by God that an earthquake would destroy their city, but a woman was the only believer and built a castle. When the earthquake happened, the rest of the city was destroyed, except her house.

The poetry was also about post-apocalyptic events.

"Those two things were in my mind when I was thinking about the landscape and people. Imagining what life would be post the end of society."

Added to that is the current situation, with the Covid-19 pandemic creating more worry about the future.

"There is a reason people are watching more zombie films — it’s tapping into that. Will there still be karaoke at the end of the world?"

"As artists we always want to dismantle or disrupt capitalism. But also feel like there are parallels between asking that and the end of the world and what happens when those things fall away.

"The works hypothesise or dream up different alternatives, I guess."

But the work is not all doom and gloom, he says.

"It has fun surreal moments as I dream about what the future looks like. I think there will still be moments of humour.

"Humans have a capability even in moments in history of terror and horror to still be able to enjoy life with moments of humour and surrealism — it’s the absurdity of the human condition." 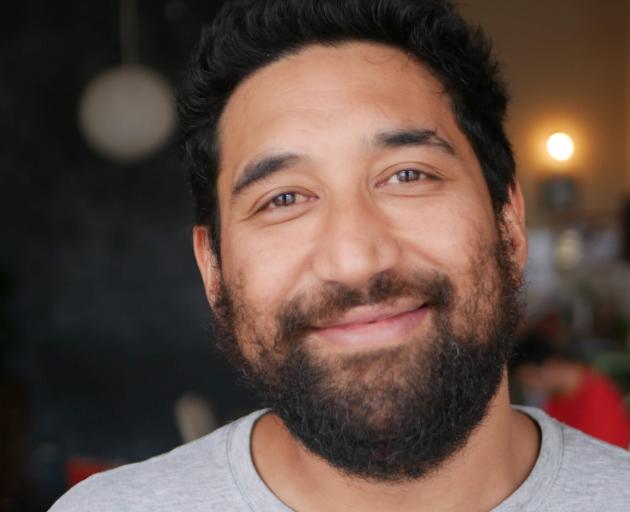 Christopher Ulutupu
To make this come to life, his characters are doing lots of normal things such as fishing, picking cockles or singing karaoke.

Ulutupu, who was born in Porirua, grew up in Nelson. He moved to Wellington to study design at Toi Whakaari, New Zealand School of Drama and has settled there.

"I’m a behind-the-scenes kind of guy. Before I began my art practice I was an art director in film."

However, he found the film industry a tough place to work, with long hours, although it paid well and was fun.

"It wasn’t sustainable for me so I found a different path and started work with Corrections on a three-month contract and was there for a few years."

But his inner creative was calling out and he realised he needed to follow that, so enrolled at Massey University to study for his master’s degree.

"It got to the point where I had to trust my inner self and I really wanted to study fine arts. I’m so glad I did. I’ve been an artist ever since."

While he can remember visiting Dunedin as a student, he found this time he had the opportunity to really enjoy the city.

"It’s been lovely to have solid time down there.

"I’ve moved back to Wellington and I’m missing some of my favourite spots like Side On, I love their food, and Best Cafe — I’m obsessed with the hidden gems around the region.

"I’m big on food tourism, too, that’s why my two favourite places in Dunedin are places to eat."