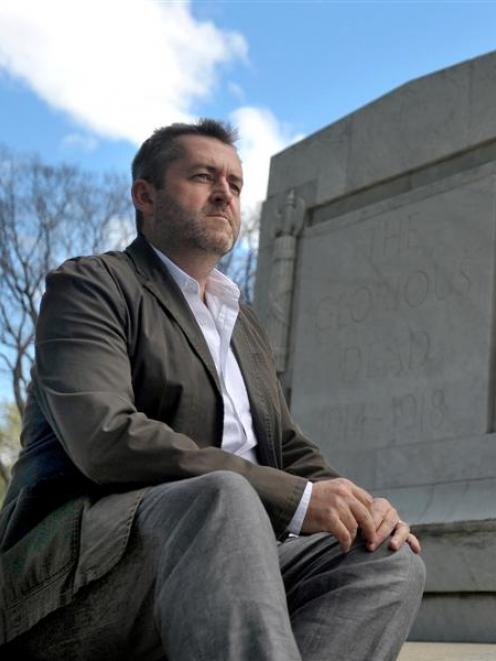 Stage director Jonathan Alver, of Auckland, arrived in Dunedin yesterday morning to prepare for the musical drama written in commemoration of World War 1.

He had left San Francisco on Thursday afternoon, caught up on sleep yesterday and planned to begin the technical work at Dunedin Town Hall today.

Although he created the concept for the piece, he did not consider himself the director.

''To say the piece is directed is a bit over the top. It's not an opera and it's not a play.''

The work was more ''ceremonial'' and the 16 members of Voices New Zealand Chamber Choir would be scattered around the hall.

''It is not an old fashioned stand-and-deliver piece - where we are all up the front and the audience are seated out there - it's more about being part of something.''

The technical work today included building a stage in front of the main stage to get the performers closer to the audience.

The choir and New Zealand String Quartet planned to arrive at the hall at 4pm today to work out how the production would unfold.

The audience would be ''enveloped'' by the performance and at the beginning the choir and quartet would walk through the audience, he said.

The cathedrals in Dunedin were researched to stage the performance but were the wrong shape for the seating capacity required.

''And the Town Hall has such amazing acoustics that it seems a shame not to use it.''

O'Sullivan wrote ''beautiful'' poems based on the New Zealand World War 1 experience and ''interjected it'' to the traditional Latin requiem mass, Alver said.

When Alver first read their work, he imagined it being sung by a choir of the dead.

''I think this choir that is singing, without being spooky about it, is the young soldiers and their wives and lovers.''

But he perceived the first character - a tenor soloist - as an elderly man, who had survived the war.

''Vincent loved it and wrote another aria to enforce that.''

The work was a plea against the horror of war, he said.

''The horror about going all that way to experience mud and degradation and the impossibly unpleasant. The piece is a tirade against war but accepts that the people that went were amazing heroes.''