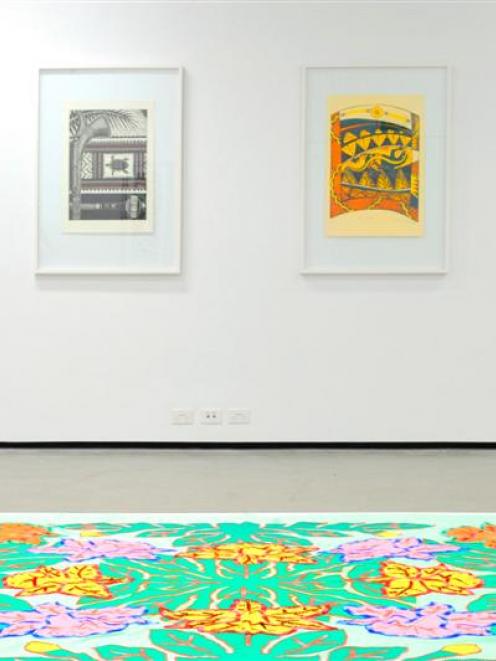 Two works (top from left) by David Teata and two by Michel Tuffery, from the "Pasifika Cool" exhibition. Foreground, tivaevae by Mara Moeroa.
Art of the Pacific, contemporary and traditional, mixes at the Dunedin School of Art's latest exhibition, "Pasifika Cool".

The exhibition, which opens tomorrow, features the work of art school graduates of Pacific Island descent, says school head of textiles Victoria Bell, who curated the exhibition with head of painting Dr Graham Fletcher, an artist of mixed Samoan and European heritage.

It coincides with the publication of art school journal Scope, which is this year called "Border Crossings" and dedicated to Pasifika content, under the guest editorship of Dr Fletcher.

"We've had in particular a very strong relationship between the [Pasifika] community and the printmaking studio," she says.

"That was led in particular by Marilynn Webb's presence when she was a lecturer here and taught Michel Tuffery, David Te Ata, Tere Moeroa and Bridget Inder. She was able, I think, to recognise some of the strengths of the Pacific students and help them to realise imagery that spoke of their cultural identity."

The exhibition aims to provide a window into that identity.

"I felt that in the work that we had in the collection it could be seen that for each artist as an undergraduate, their cultural identity became an important aspect of their art-making to some degree. For some it was very strong. For example, Michel Tuffery, as part of his undergraduate study, he applied for research funding to go to Samoa ... and he went to Samoa on the 25th anniversary of the Treaty of Friendship between Samoa and New Zealand. He speaks about how incredibly important that research was in informing his practice and his understanding of fa'a Samoa, tapa and tatau [tattoo] and that's evident in his work. He's a consummate artist now whose identity is integrally entwined with his practice.

"Funnily enough, he's just made, with NZ Post, postage stamps that commemorate the 50th anniversary of the Treaty of Friendship between New Zealand and Samoa."

The artists are from a range of Pacific backgrounds. Several are Cook Islands Maori, Samoa is represented, while others have Tongan heritage, including Robson and the first student at the school to identify as a Pacific Islander, Harman. Harman, who graduated in 1985, has a background mixing Fijian, Tongan and Scots New Zealand ethnicities. Tuffery, who became a Member of the New Zealand Merit of Order in the 2008 Queens Birthday Honours List for services to the arts, is of Samoan, Rarotongan and Tahitian heritage.

Bell says that while each Pacific Island culture's identity is distinct, the exhibition has a general cohesion.

"In the show that's quite evident. What I have also done is included three artworks that are textile orientated that come from connections in the community. So we have a tapa cloth which is of Tongan origin, which Catherine Cocker has loaned to us ... and this is the tapa that was the funeral tapa for her father's funeral. He passed away while she was studying here."

The other two works are a tivaevae (quilt) made by Tere Moeroa's mother, Mara Moeroa, and an ie toga (mat), which was gifted to the former (Dunedin) teacher's college and now hangs in the University of Otago's Owheo building.

"So these three objects are connected in some way to the stories of these artists' journeys. 'Journeys' is a bit of a corny word, but it helps to talk about the way that Pasifika artists' work is perhaps not just about themselves, it's about the past, it's about the future, it's about family and that connectedness is very important to a Pasifika perspective or world view, I believe."

This comes through in the way the work of the contemporary artists relates to the traditional items, she says.

"The notion of textile practice has been picked up by Bronwyn Robson. She's made leis out of felt and carpet cloth, so I have attempted to have the objects speak across to each other. In a lot of the print work by Te Ata, Inder and Moeroa, the tapa cloth patternation is showing, you can see the crossover dialogue."

See it
The exhibition hangs at the Dunedin School of Art Gallery until Friday, October 26. The opening tomorrow is from 5.30pm until 7pm. Members from Koile and Pacific Underground will perform in a collaborative line-up at the opening.