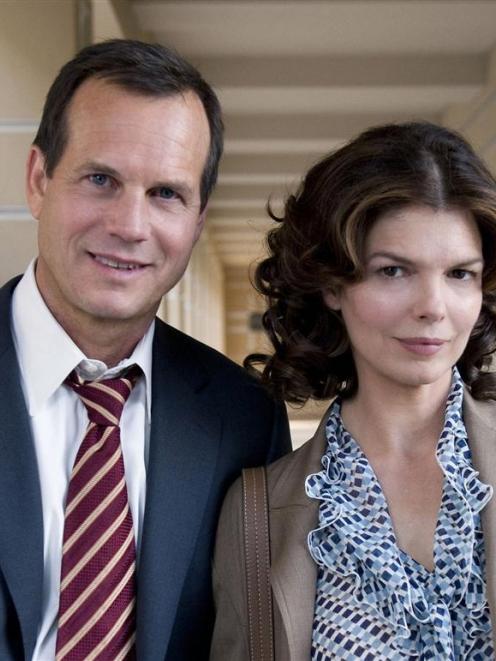 Bill Paxton (Bill) and Jeanne Tripplehorn (Barb), leading characters in Big Love.
As so often happens, the source of Big Love's greatness almost proved to be its undoing.

For three seasons, the HBO drama about a polygamist family was astonishing in its narrative agility, able to persuade increasingly devoted audiences that the Henrickson clan - one husband, three wives - were not all that different from their non-polygamous counterparts.

The cats-cradle of familial relationships, set against Juniper Creek, the polygamous compound where Little House on the Prairie gingham concealed hearts right out of Scarface allowed creators Mark V. Olsen and Will Scheffer to explore character and story in a way that would otherwise require three or four separate shows.

Aided by a flawless cast including Bill Paxton as Bill, Jeanne Tripplehorn as Barb, Chloe Sevigny as Nikki and Ginnifer Goodwin as Margene, Big Love took on the big themes - love, marriage, God, family, the very nature of adulthood - and shook them until the floor glittered with hidden treasure.

Suddenly Bill was running for state senate and going Rambo in Mexico, and Nikki and her mother were mixed up in some Boys From Brazil-type scheme.

There was a casino on the reservation subplot, a Sissy Spacek as politico subplot, the Henrickson kids were all over the map and at the end of the most improbably political campaign in history, Bill outed his whole family.

So, a little crazy. It's hard when a show that asks viewers to suspend some of their most basic beliefs - it's easier to convince us that someone can fly than that a modern, self-loving woman would agree to a polygamous marriage - crashes against its own safety rails.

When a Titan stumbles, the universe rocks.

But Atlas has regained his footing.

Season 5 of Big Love, which has just begun in the United States, acknowledges the wider world, but the action returns to the more intimate theatre of the principal characters.

HBO recently announced this would be the show's final season, which means Olsen and Scheffer are free to write with a final goal in mind. After a brief, but still biblical, respite in the desert, the Henricksons regroup and soon face a host of other situations both stemming and separate from their new visibility.

Because polygamy is not a felony, and because there is, apparently, no system for recall or impeachment in Utah, Bill takes office, only to find himself with no allies and many enemies.

Having grown increasingly autocratic, Bill must face the reality that he has irreparably damaged many relationships and possibly made a gigantic mistake.

As usual, Paxton finds just the right blend of tyranny and genuine humility to win the audience's vested interest. Each of the wives is at a similar turning point.

Barb, who has never been at peace with polygamy much less being the public face of it, is realising there are certain things even love cannot accommodate; Margene loses her business and, she fears, her identity; Nikki is faced with the most dangerous predicament of all - she's got what she wanted.

If that wasn't enough, Bill's mother, Lois (Grace Zabriskie), and Nikki's mother, Adaleen (Mary Kay Place), are very much in evidence with devastating results. Big Love quickly reclaims its astonishing ability to balance the insightful and the absurd, hilarity and heartbreak and the personal with the political.