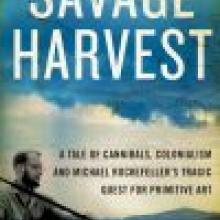 SAVAGE HARVEST<br>A Tale of Cannibals, Colonialism and Michael Rockefeller's Tragic Quest for Primitive Art<br><b>Carl Hoffman</b><br><i>Text Publishing</i>
This is one of the most fascinating reads in recent times; a more-than-50-year-old celebrity cold case revisited in the 21st century.

It could be a blockbuster movie synopsis: the son of one of the world's most wealthy and powerful families disappears on a remote island of headhunters and cannibals, sparking worldwide clamour, to become shrouded in decades of mystery. Except it is true.

In November 1961, Michael Rockefeller, of the New York Rockefeller dynasty, is in New Guinea collecting the primitive art of the indigenous warrior Asmat people.

When his small craft is wrecked at sea, he leaves his companion and swims toward the mangroves and jungles, never to be seen again, at least by any searchers.

Author Carl Hoffman does the hard yards revisiting the remote riverside villages of the primitive Asmats to unravel the lingering mystery, which at the time took up the front pages of the world's leading newspapers for months.

This is the third book by Hoffman, a former journalist and travel writer, who visits New Guinea repeatedly, unravelling the generational threads which bind the story.

While cold-case crimes are fashionably solved by DNA, Google Earth and data cross-referencing, Hoffman's journey replicates Rockefeller's, a descent into a primal cannibal culture with no written language, where fact lies somewhere in a haze of fiction and tribal myth.

Hoffman notes: ''Here was the heir to one of the largest fortunes on earth plundering sacred objects for pennies - the most privileged person on earth dabbling in the world of the most marginalised, the lowest of the low on the totem pole, so to speak''.

Fluid and riveting, some content could shock, but facts, photos, new documents and interviews just two years ago bind the five-decade-old mystery. While the reader will ultimately decide if the plaudits that Hoffman ''uncovers startling new evidence'' are merited, it is an absorbing and compelling read.