Brown takes on Dante with tried and tested formula 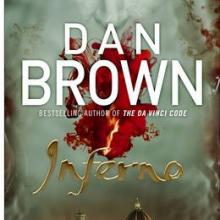 INFERNO<br><b>Dan Brown</b><br><i>Bantam Press
Dan Brown fans will find that the emphasis in his latest book Inferno shifts from the art of The Da Vinci Code to poetry.

The words of Dante's dark, epic masterpiece The Divine Comedy reverberate chillingly throughout the pages as the Italian poet's vision of the infernal geography of hell is promised in a plot to spread some sort of plague on Earth.

Well not too different - there is still a great deal of art adorning the writer's words, with many paintings, sculptures and historic architecture described as the action shifts from Florence to Venice to Istanbul.

The plot is well laid out as a gift ready for scriptwriters with the locations and sights needed for this next bestseller should it undoubtedly become another movie.

Short chapters, tons of action, this is yet another book based on a frantic quest that steams off until its final ending.

I could not put it down for long, but was often disappointed by the writer's tricks; nothing should be taken at face value as there are so many surprises in store for the reader.

I did not appreciate Brown's constant device of sprinkling unspoken thoughts in italics throughout the dialogue or action. And the writing is rather cliched.

The principal character is again Harvard symbologist Robert Langdon who has lots of clues and coded secrets to decipher as a clock ticks very menacingly in this, his fourth book - and he is facing amnesia at the start of it.

The main female character is a doctor with an amazingly high IQ, and there is menacing girl on a motorcycle, who seemed straight from The Girl with the Dragon Tattoo.

Other characters are the director of the World Health Organisation who seems to have her own army, the brilliant but mad scientist who commits suicide early on, and a shady figure called the Provost with his own multinational ''Consortium'' of sinister agents pulling strings to cause more mayhem and confusion.

Why did Langdon steal Dante's death mask from a museum?

What was in the titanium tube marked with a biohazard warning symbol found sewn into his jacket? - and there are many other posers.

It is all rather comic book, yet based on an underlying serious ethical problem: the world's rapidly growing overpopulation. Would it be better if a plague epidemic reduced the numbers?

Or could a possibility of increasing infertility among humans provide an answer?

After the Black Death came the Renaissance, Zobrist the villain points out, and its accompanying great flowering of artistic and literary talent. Brown again enjoys throwing in the symbols and puzzles for Langdon to identify or solve.

You can't fault the author for doing so much research into Dante and also into the various locations used in Inferno's plot.

It is a pity though that there is always sharp contrast between rapid action and the constant pauses to tell us the height of a building, the date it was built, builder, the artworks that are in it, etc.

This invites a keen reader to skip scholarly bits and shoot on to find out the answer to a previous crisis or the next twist in the plot.
But that's Dan Brown's formula and it is a hugely successful one.

Geoff Adams is a former editor of the ODT.