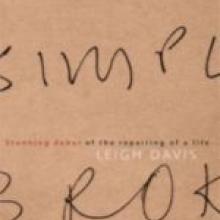 Hamesh Wyatt reviews Stunning Debut of the Repairing of a Life.

Robert Frost once said, "A poem begins with a lump in the throat: a homesickness or a love sickness. It is reaching out toward expression: an effort to find fulfilment."

Leigh Davis died last year at 54, from a brain tumour.

He was born in Wanganui, raised in Raetihi, studied English at Auckland University in the 1970s, took a job at Treasury with no commercial experience, joined Fay Richwhite, participated in some of the largest, most cunning investment banking deals in our history - the infamous acquisitions of Telecom and New Zealand Rail.

Yet, Davis might be the only New Zealand poet to have an obituary in the National Business Review.

Stunning Debut of the Repairing of a Life is no little book of poems.

Rather, it is a book-length poem that was written during the 15 months between diagnosis and death.

What made it more difficult to complete was that the tumour was gradually eroding Davis' facility for language.

Scrawled across the cover are the words "simple, broken, beautiful", the title on a notebook of poetry.

After Davis' first surgery, while undergoing radiotherapy, he began to keep a journal.

His widow, Susan, describes the first part of this book.

"Words don't come out as the words we know.

"A private language develops out of necessity, full of substitutions that refer to shared experiences, sometimes charming, sometimes frustratingly incomprehensible."

The reader is given page after page of this notebook, the working from another dark night of the soul, only to find he is stuck in another bleak morning.

Davis presents a mixture of the innocent, the profane, the sweet and the sour, the whisper and the growl - shown on ripped out pages.

But week by week, Davis improved. Stunning Debut goes through a transformation.

He switched from a journal to a computer and the book moves into a sonnet form.

He wanted his reader to experience poetry beyond the setting of reader and book.

He wanted his poetry to "ping" (his term) by colliding with art.

In 1998, he put together his Station of Earth-Bound Ghosts, poems inspired by Te Kooti, the 19th-century Ringatu prophet and guerrilla leader. He hung his poems on 29 huge 3m flags in the breezy, immense concourse of Auckland's central railway station.

"They take it and absorb it, from all over. And yet often with poetry, they want classic hits, something they can say [about] 'this is' what it means.

"Leigh's work is very different to that. You have to kind of swim in it."

11 October 2008
Take my breath away.
As always we do not have time
to live the dreams we are given.
This ages us: open your eyes
under water the creases of my face,
your map of passions,
vices, angers, intimacies.
People that call on us
that we, who might say this is an
owner, were not home.
Take my breath away.
Open your eyes under water
of height: over and over and over.

As much as Davis wears dying on his sleeve, his own personality shines through.

There is no dip in quality in Stunning Debut.

The poem is of an admirable breadth and length. It simmers along gently.

He was capable of anything, except being dull.

Plus, there are two more books to come.

Andrew Johnston mentioned in the introduction of his excellent anthology Moonlight: New Zealand Poems on Death and Dying (Godwit, 2008): "It is inevitable that death should be the one big subject for poetry: if the poet classically is a little god, seeking immortality with every poem, then death is the limit he or she is always coming against."

Leigh Davis, elusive, suspiciously corporate, intellectually difficult, speaks to us beyond the grave. Stunning Debut of the Repairing of a Life is a book full of emotion, charm and heartfelt honesty.