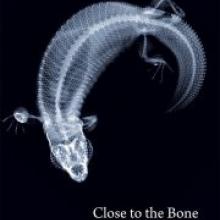 She is now in her third year at medical school in Auckland. Her first collection had an edge and bite one would not expect from a 17-year-old.

Close to the Bone ups the ante. This is a slim collection of tough, brutal poems delivered in a cool and nasty way.

Her final words in The kiss talk of "Moonshine on a murdered girl, / naked in the snow.''

Trevella hits on the idea that agony is neither a word nor a concept. For many it is a reality.

First, do no harm hints at how the magic of medicine is fighting a losing battle against the world. Plenty of central figures in her poems are tracked, penetrated, hurt and left for dead.

The title poem "Close to the Bone'': See the people in the churchyard made from sellotape and bubble wrap, throwing flowers and soil onto a polished wooden box. When they open their mouths and try to speak, the alphabet gets up to leave.

Close to the Bone is dramatic, absorbing and succinct and full of punchlines and poems that will knock you off your feet.