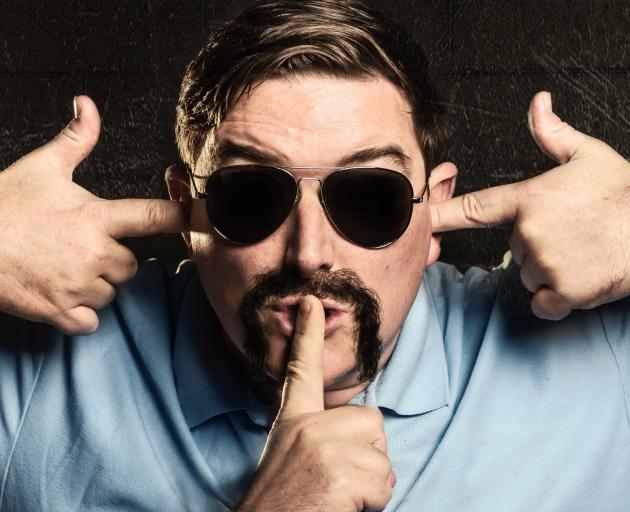 Invercargill, Dunedin and Queenstown are all on the list for Chopper's The Silencer tour. PHOTO: SUPPLIED
He has been rescheduled three times and now he is back, he does not plan to be nice.

Comedian, actor, writer and improviser Heath Franklin will bring fresh content for his The Silencer tour, but would be as on-brand as ever as the no-nonsense, "cutting through the BS", Chopper.

In a world where everyone voiced an opinion, he reckons they should shush and stop adding to the noise.

"Everyone is outraged about everything. It would just be nice for everyone to calm down a bit."

Chopper himself is not known for being calm.

Based on the Australian criminal and author Mark "Chopper" Read, it was Kiwis’ lack of knowledge that Franklin enjoyed.

"People don’t have as much background knowledge on Chopper as Australians.

"Especially in Melbourne where he was from, you’d get all these really pedantic true-crime trainspotting types that would say, ‘Oh, Chopper wouldn’t have done that’. Well, Chopper would have done something horrifically violent and not very funny."

It was the movie based on Read’s autobiographies that inspired Franklin, who found it incredibly dark but also, in parts, humorous.

"I thought if you can tweak it a bit, increase the funny and remove the dark it would probably be a good time."

While on stage he was confidently loud-mouthed, Franklin said that was not quite the case when he met the inspiration behind his character in the flesh.

They met during a magazine photoshoot, which Franklin described as interesting.

"I have to admit I felt like a total imposter.

"He was there with all his real tattoos and missing teeth and stab wounds and here I was with Sharpie tattoos."

Invercargill, Dunedin and Queenstown were all on his list of shows for the tour.

"To say I’m excited is a massive understatement."

It would begin in Nelson on June 17, playing at venues throughout the country for a month.