Clooney turns out to be quite the fox 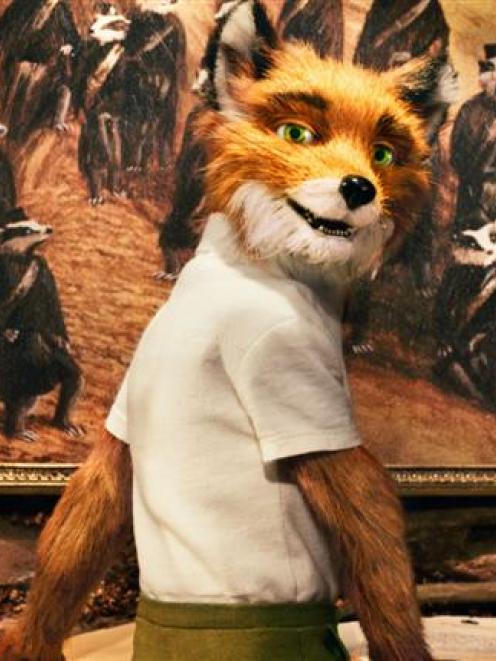 George Clooney voices the role of "the fantastic" Mr Fox. Photo from Foxpress.
Director Wes Anderson knows a fox when he hears one, Michael Cavna, of The Washington Post, reports.

Like a gifted child at playtime, film-maker Wes Anderson is one to marvel over his cinematic toys - a fertile imagination giddy with trains, hydroplanes and foreign automobiles.

Many of his trademark preoccupations travel through his first movie, Bottle Rocket, straight through 2007's The Darjeeling Limited.

Anderson, though, well knows that his vehicles and curios and even wry-wit scripts alone do not transport the audience.

To accomplish that, you have to hire smart.

"That's one thing: I wanted to cast him," says Anderson, speaking from New York about Fantastic Mr Fox, his movie based on Roald Dahl's beloved tale.

"I've loved his work in so many movies."

Off the top of his head, Anderson cites Three Kings, Michael Clayton, even a memorable episode of ER.

After two fairly tepidly received films (Darjeeling and The Life Aquatic With Steve Zissou), the director fortuitously landed the roguish actor to voice the title role of the thieving, charming vulpine.

But even after casting Clooney, Anderson did not fully appreciate what a fantastic fox he had.

That realisation came after some of the voice stars - including Anderson regulars Bill Murray and Jason Schwartzman - headed to their friends' farm to record lines in the atmospheric outdoors.

It was there Clooney - veteran of suave, talky con men (Ocean's 11 to O Brother, Where Art Thou) lent his textured talents.

"When we went and recorded on the farm in Connecticut, I got documentary recording of some of these roles," says Anderson.

"The thing I did not realise - until only afterward, when I went to the cutting room - was how much he brings to the performance and how much we'd already gotten. For the animators, these voices are their key inspiration."

The Oscar-winning Clooney voices a bushy-tailed burglar who settles down into duller life as a family man-fox and newspaper columnist before his midlife crisis, in fox years, compels him to filch again from three menacing farmers.

Anderson, who expanded Dahl's story considerably, says Fox was the first book he owned - at least the first one he ever wrote his name in.

Now, critics are saying the director, stylistically, has made the story his own - with droll irony and cultural reference points galore, the Andersonian signature is all over it.

The film-maker says he was inspired, too, by Meryl Streep, who voices Mr Fox's wife, Felicity (a nod to Dahl's second wife).

"I recorded with her in Paris," says Anderson.

"And I felt like she actually changed my approach to the movie. She brought so much emotion, it was (like): This is where it's got to be. The stakes can be higher."

The Streep sessions were part of the continual stoking of the film's potential.

Anderson co-wrote the screenplay with The Squid and the Whale director Noah Baumbach - after being inspired by a pilgrimage to Gipsy House, Dahl's home in Buckinghamshire, England, in 2000. (Dahl died in 1990.)"It was muggy and grey and colourless - the house wasn't, but the landscape was ...

The place was fascinating," says Anderson, noting Dahl (who's given Hollywood Willy Wonka and James and the Giant Peach) is a hero of his.

Fox has a striking palette - it's a literal movable feast of autumnal tones, a pageant of true-fur textures and watercolour skies.

Anderson says the Dahl house, its garden - even a tree resembling the Fox home in the film - provided visual spark.

"The whole look of it came from that," Anderson says.

"At a certain point, when you decide that the grass is going to be (the colour of) yellow bath towels, then you're set on a certain course ...

The other thing is, once you decide that the sky is not blue and the grass is not green that you're going to have a hyper-autumn that combines with the (effects where) smoke is made from cotton balls and water is made from Saran Wrap."

True to his reputation, a demanding Anderson says he sweated every stop-motion detail of his warm-eyed woodland figurines, which he affectionately calls "puppets".

That means while Hollywood trumpets ever-advancing CGI and 3-D effects - from Up to Monsters vs Aliens - Anderson insisted upon the laborious, shoot-a-movement-at-a-time technique that has been animating the sepia-silver screen since 1925's The Lost World.

But why stick with stop-motion now?

"It's kind of tried and true," says the Oscar-nominated film-maker of The Royal Tenenbaums and Rushmore, whose soundtracks underscore a nostalgic aesthetic.

"I grew up on the Rankin-Bass animated specials. I'm 40, and I cannot express how revved-up my brother (who voices Kristofferson in Fox) and I were when the holiday specials (came around). Those were the ones we really looked forward to."

So with Fox in his pocket, does he plan ever to do another animated film?"Yes, definitely," says Anderson, who could have exclusively a stellar animation career, if he wanted it.

"For my next film, I'll be working with (on-screen) humans again. But yes, after that."