A dame in training 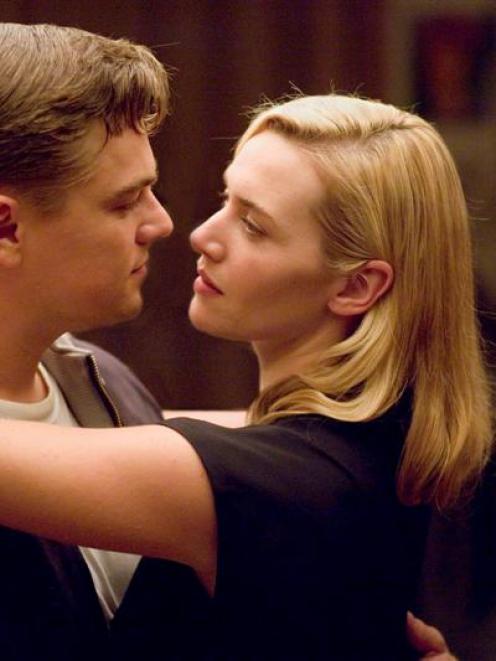 'Revolutionary Road'
She might not have an Oscar yet, but Kate Winslet's career is the one to watch, writes Monica Hesse, of The Washington Post.

In the Hollywood-as-high-school fantasy of our minds, Katherine Heigl and Kate Hudson giggle in the back of RomCom 101; Anne Hathaway rocks an independent study with Julia Roberts; Charlize and Nicole breeze in and out of "Prosthetics and Your Oscar."

And tucked away somewhere is a permission-only course team-taught by Judi Dench, Helen Mirren and Vanessa Redgrave, with occasional guest lectures by Maggie Smith.

The class is called "Dame Training: How to Join the Greats."

And because Cate Blanchett and a few other pupils are absent today, the only student taking furious notes and rapid-firing questions is Kate Winslet.

Kate Winslet? Lovely. Lovely in Sense and Sensibility, lovely even when speaking vulgarities with that British accent.

Lovely in her fleshiness, which has nothing to do with the curves everyone's always talking about and everything to do with how real she is, and the fact that when she cries on screen she looks genuinely awful.

She has no academy awards, though she's been up for five.

Next are two more Oscar-bait roles, The Reader and Revolutionary Road.

She may not see it ("HA, HA, HA, HA, HA," she explodes when the dame thing is suggested), but after a decade of being the "Not-It" girl, eschewing "hot" for "interesting," one gets the sense that she's going to be one icon of a woman.

Winslet (33), has been here all day for interviews. Her feet are bare, the rest of her is va-va-voom in a sleeveless black dress.

Skin: Creamy enough to be spread on something.

It's set in the decades after the war, exploring the ramifications of an affair between a German teen and the older woman he discovers was a guard at Auschwitz.

Winslet's Hanna Schmitz is at once stony and fragile, a monster but, perhaps, due to a secret revealed midway through the film, also a victim.

The sex scenes with barely legal David Kross are plentiful and naked.

"I was very aware that if an audience member felt any degree of sympathy for Hanna Schmitz, at the same time they would feel compromised for feeling that way," Winslet says, which is exactly why she thought the role was so delicious.

"What you're given at face value is extremely limited, but you knooooow beneath the surface there's so much stuff for you to rummage through."

Revolutionary Road, directed by her husband, Sam Mendes, is about marital carnage.

A 1950s couple rages against the suburban machine because they'd expected their lives to be more interesting than barbecues and community theatre.

It reunites Winslet with Leonardo DiCaprio, whom Winslet's 8 and 5-year-old call "Uncle Leo," and it so thoroughly disabuses any notions of young love that it makes one wonder if Jack slipping into the ocean at the end of Titanic wasn't the best thing for the couple after all.

Dingy postwar Germany versus bland Connecticut 'burbs, but deep down both movies are about the same thing: how limited options and wrong choices can completely and ruthlessly destroy a life.

The right choices, inversely, have made Kate Winslet. Turning down the blockbuster offers after Titanic seemed an odd choice at the time.

"But that was a very, very strategic life choice I had to make," Winslet says.

"I was suddenly really famous, and I didn't know how to cope . . .I didn't know myself well enough as a person, number one, and as an actor, number two. I wanted to escape."

She did Hideous Kinky instead, which was neither hideous nor memorable, but opened her up for a series of funky, corseted roles.

Critics often categorise Winslet's roles as "eclectic," a useless descriptor that really means she doesn't do action or girlfriend-in-a-box, and she doesn't crack the Hollywood Reporter's top-10-highest-paid-actress list.

"She's very rare among her contemporaries in that. She loves complication. She doesn't make easy choices. She's a natural successor to an actress the calibre of Meryl Streep."

Of course, how could we forget Meryl, the mother superior of the Dame school?

Winslet's methods are intense: While filming Revolutionary Road, which Mendes directed, she assailed him with so much character analysis that he finally told her to lay off.

She countered: "If you were my director and we weren't married, I would be on the phone to you right now. And I've got to point out to you that you would take that call.

"I know that Jake Gyllenhaal would call you every night when you were doing Jarhead, because I was there."

But when it comes to career paths or life goals, "I don't have a radar for agenda or strategy," Winslet insists.

She brings up an anecdote from a past film, when the studio promised to call after opening weekend to discuss "the numbers".

A baffled Winslet asked Mendes: "What numbers? What are they talking about? And he had to explain to me, `The box-office numbers, babe'."

She pauses, for effect. "Oh, for God's sake. I don't need to know all that stuff."

The jaded interpretation of this story is that:(a) She's lying, or(b) She doesn't need to know all that stuff because Titanic gave her instant box-office cred at 22, and because she's married to a director who himself is an Oscar winner (for American Beauty).

This makes it possible for her to take large chunks of time off, to plan elaborate family Christmas dinners, to meet with a mothers group in Chelsea.

Kids Sam and Mia are so bubble-wrapped away from Hollywood that, at a recent doctor's appointment, Mia became fixated by a magazine cover.

"She said, 'Mum. Leo is on the cover. Why is Leo on the cover of a newspaper? We've got to save this for him and send it, because that's so funny'."

The non-jaded view which remembers her stage-actor parents and her adolescence spent slicing pastrami in her village delicatessen is that she really does care more about the work and the balanced life than the fame or money.

This other view, which you keep coming back to despite Winslet's shocked protestations otherwise, is that she is in dame training.

Judi Dench didn't win an Oscar until 1999, after all; Helen Mirren, 2006. They were great all along, of course, but it took decades for us to realise that they were, quite simply, grand.

"Through the roof" is how Daldry describes the trajectory of Winslet's future career.

Modesty and craftsmanship aside, the thought of being handed the mantle (sceptre? cloak? what exactly do dames carry?) of Dench or Streep is kind of terrifying.

Though Winslet describes the past two years of filming as the most creatively gratifying of her life, the rewards aren't without pressure.

"I'm in a position where at the age of 33, the roles I'm being asked to play are getting more and more challenging," she says.

"And I have to step up to the plate. I have to deliver the goods. Because that's what they employed me for."

Still, wouldn't she rather have it this way? Really, Kate, it's not like you're going to go play Batman's girlfriend or something.

"It's funny" you should say that, Winslet muses, "because when Maggie (Gyllenhaal) played Batman's girlfriend, I thought, oh, that's so cool. Or to just be a Bond girl. Wow."

She thinks for a moment, as if it's not too late to enrol in "Introduction to Hot Girlfriends" down the hall.

But it is, of course.