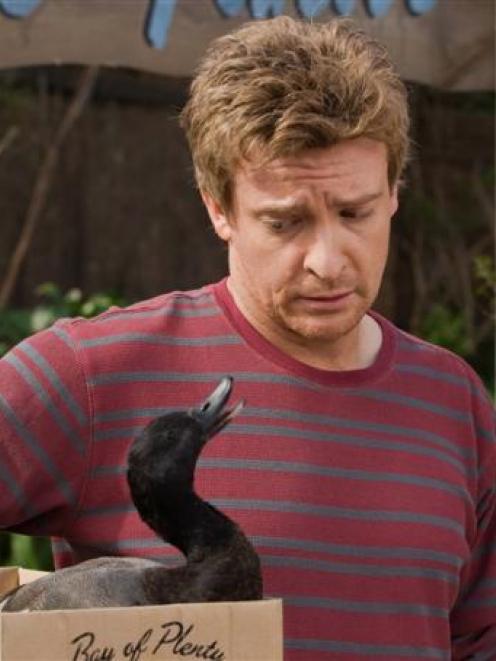 
Jaunty comedies are not in New Zealand cinema's comfort zone. We far prefer brooding introspection to verbal dexterity, so anyone approaching Love Birds (Hoyts and Rialto) has a right to feel apprehensive.

Comedian Rhys Darby created an iconic character as Murray in Flight of the Conchords but, since we have been deluged with him plugging a phone network, there is a sense he is overexposed.

As Doug, he has to be halfway believable as a romantic lead and, to be honest, that is about as far as he goes. Instead, the film turns the geek factor to its advantage.

Leading lady Holly (Sally Hawkins) says at one point "You know you're a bit of a dick?" to which he nods agreement and you realise you are not supposed to wish your man was more like Doug. Instead, you are supposed to think "Yes, my guy is a bit of a dick and I am all right with it." Which is very Kiwi.

Doug starts off being dumped for being boring, but he cannot see what is so wrong with his cosy routines that put friends and family before ambition.

Being forced to care for an injured paradise duck he calls Pierre puts him in the path of love-averse avian expert Holly. Feathers fly as they find that second-best love just might be lasting love.


Best thing: The duck is an absolute natural. The animal wranglers can feel very proud.

Worst thing: For all its charm there is something tentative about this - as if everyone is so afraid of stuffing it up that they cannot relax.

See it with: A desire to see the first big-screen depiction of the Kiwi sensitive new age guy. Makes a change from all those man-alone types.