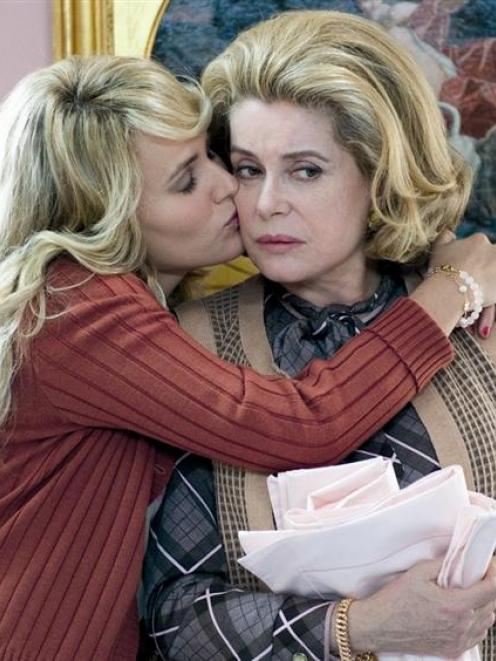 
Set in the late '70s, Potiche's flashpoint is French civil unrest and emerging feminism. At the crux of the story is a subjugated housewife.

From the opening frames, where every cheesy editing tool from the era is employed, Potiche never plays things too straight. Catherine Deneuve is Suzanne, the trophy housewife. Made up to look every bit her 69 years and some, Deneuve proves there is more to her repertoire than the slightly mysterious sex symbol.

Holed up in an ostentatious mansion, Suzanne is bored to tears, but she just doesn't know it, yet. Dominated by her megalomaniac husband, Robert, and seen as a relic by her bossy daughter Joelle (Judith Godreche), Suzanne wakes from her slumber when forced to confront striking workers at the family umbrella factory.

She renews an old friendship with socialist mayor Maurice Babin (Gerard Depardieu) and skeletons start tumbling out of the closet. Deneuve hits every comic note with deadpan brilliance, and with Depardieu as the perfect foil, Potiche is a curious delight.

It's pretty obvious where director Franois Ozon is heading, but that doesn't stop him throwing in some red herrings. Echoing themes consistent with French governance under Nicolas Sarkozy, Potiche is a very amusing and superficial dissection of class politics that's easy to identify with. With its great performances, awesome clothes and a visual style that borrows from the whimsical end of The French New Wave, Potiche is one of the better French farces released in the last decade.

Worst thing: The caricatures of the French working class.

See it with: A hand-knitted cardigan and spray-on bell-bottoms.