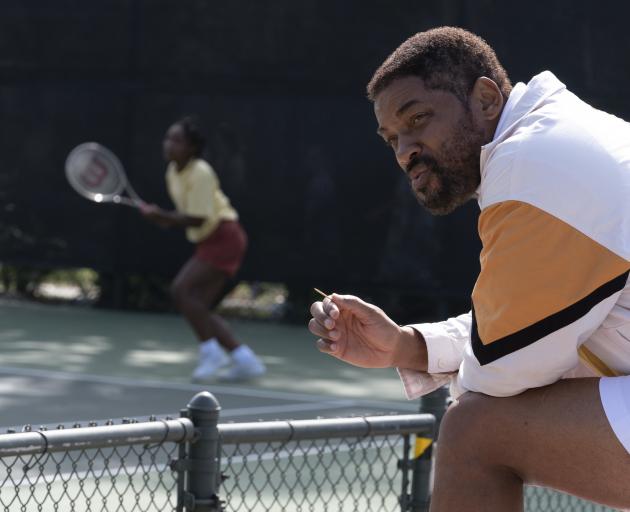 Will Smith as Richard Williams in King Richard. In the background is Aniyya Sidney as Venus Williams. PHOTO: WARNER BROS
From Fresh Prince to King Richard, personal upsets have so far failed to derail Will Smith’s childhood goal to be the world’s biggest film star, writes Wendy Ide.

There’s a seemingly offhand quality which is central to the appeal of Will Smith: an innate magnetism and loose-limbed, casual coolness. But the career path from teenage rap artist to TV actor to superstar status was anything but effortless; it was the result of a self-described "psychotic" work ethic and meticulous, perhaps even obsessive, planning.

For a while, at least, he was one of the most bankable film actors on the planet — a planet that he saved on a regular basis in summer blockbusters. But while that kind of success rate is hard to sustain, Smith has shown himself to be extremely adaptable compared to his contemporaries. From film actor/musician, he has evolved into a multimedia phenomenon. He has adopted a very marketable openness and accessibility, and embraced personal failures as teachable moments.

Having already rebranded himself as a social media superstar, he cruised through lockdown with a hugely successful streamed show in which he sprawled in sweatpants while riffing with celebrity buddies on Zoom.

Now he’s back in more traditional movie star territory, with the double-pronged assault of a candid new memoir and one of his finest and most awards-friendly performances in years, as Richard Williams, father and coach of Venus and Serena, in Reinaldo Marcus Green’s King Richard. The Hollywood Reporter described him as "outstanding", and Vanity Fair lauded "a sterling reminder of Smith’s singular charge, seizing upon a mighty challenge with thrilling recommitment".

The book, meanwhile, is entitled Will and is sold as "an epic tale of inner transformation and outer triumph" which digs into the life events which fine-tuned Smith’s weapons-grade charisma and steely determination.

He was born Willard Carroll Smith Jr in 1968 in Philadelphia. Nicknamed "Prince" at school for his formidable charm, he tasted success early on. As the Fresh Prince, alongside his childhood friend Jeffrey "DJ Jazzy Jeff" Townes, he had released a single before he had finished high school; they were the first hip-hop artists to win a Grammy, and he was a millionaire by the age of 18.

Smith was raised a Baptist: the PG-rated rhymes derided in some quarters of the rap community were a result of an intervention by his God-fearing granny. Rather than profanity, Smith learned to harness quick-witted humour, a skill he deftly transferred from music to acting. It was not all plain sailing. Smith’s money management skills left something to be desired, and the IRS came knocking with a substantial bill and a repossession order for most of his liquid assets.

Bruised by the experience, Smith left Philadelphia for LA and, in 1990, signed as the lead in the NBC television series The Fresh Prince of Bel-Air, having been strong-armed by Quincy Jones into an off-the-cuff audition at Jones’ house.

Thanks to the IRS, Smith’s move to Hollywood was not liberally bankrolled, but he did arrive with a plan: to be the biggest movie star in the world. To this end, he studied the then 10 most successful films of all time to identify patterns. He scrutinised Tom Cruise’s promotional techniques and sought advice from heavyweights like Arnold Schwarzenegger ("Think of yourself as a politician running for Biggest Movie Star in the World," was Arnie’s response).

Smith’s elevation to movie star status was so swift and decisive, it’s easy to forget that he straddled two hitherto significant barriers. First, he overcame the film industry’s resistance to the idea of a television personality making the leap to the big screen. Second, and more significantly, was the issue of race. Smith was the first black star to be routinely cast in roles not specifically written as black.

A case in point was the 1995 buddy cop movie Bad Boys, which had been intended for Saturday Night Live comedians Jon Lovitz and Dana Carvey. Director Michael Bay, who was vocal in his dissatisfaction with the screenplay, cast Smith and Martin Lawrence in the two central roles and encouraged them to improvise rather than to stick to the lines on the page.

Bay was also instrumental in the rebranding of Smith as a big-screen star, encouraging him to take his shirt off for one shot. Smith dismissed the idea as corny, but Bay persisted and they compromised with an open shirt. Bay later recalled "I was like ... ‘Look at this! You look like a movie star!’ And he’s like: ‘Shit, I do!’."

It was a revealing moment in more ways than one for Smith, who later said: "That was where I learned how important single images are. That single image took me from a comedic television actor to a potential movie star. The scripts that I started to get offered changed dramatically."

The ripped physique certainly didn’t hurt Smith’s prospects, but there has never been a shortage of sculpted torsos in Hollywood. What set Smith apart was an inherent likability. Tommy Lee Jones, Smith’s co-star in Men in Black, said: "Will is more generous than anyone, and he spreads joy. He walks into a studio, walks on to a set, and makes certain that everybody’s happy. He can’t help himself." That’s high praise from the famously curmudgeonly Jones, who took a visceral dislike of another co-star, Jim Carrey, because he "couldn’t sanction [Carrey’s] buffoonery".

According to his new book, the need to please comes from a darker episode. At 12, he witnessed his father assault his mother and was paralysed by fear into inaction. Smith’s urge to entertain was, he suggests, partly a response to what he perceived as his own cowardice, a distraction technique to avoid further conflict. "Comedy defuses all negativity," he writes.

Wherever the motivation lay, it worked. Smith holds several box-office records, including that of the most consecutive $100million-plus hits in the US: eight, starting with Men in Black 2 and ending with Hancock. He has been Oscar-nominated twice, for lead actor performances in Ali and The Pursuit Of Happyness; another nod is on the cards, and early buzz suggests that the third time might be the charm.

Perhaps more revealing than the career triumphs are his reactions to the inevitable bumps in the road. Smith, as the tone of his book suggests, is into personal growth and self-actualisation. And he has no qualms about being public about his journey. Talking to British GQ recently, director Michael Mann, who worked with him on Ali, said: "He’s got a lot of balls artistically, and as a man. He’s materially, wonderfully successful — and conscious of that — but he asks himself the most serious and profound questions that every single one of us encounters in our lives."

Thus the critical drubbing of films like After Earth prompted candid reappraisals of his career and values; in his book, Smith further confronts the painful fallout from the film: his son Jaden, who co-starred and was targeted for particularly vitriolic criticism, considered applying for legal emancipation at the age of 15, a pointed no-confidence vote in his father’s guidance. A rocky patch in Smith’s marriage to Jada Pinkett Smith was explored in a well-meaning and only slightly cringey discussion on Pinkett Smith’s web series, Red Table Talk. And in May this year he posted a snapshot displaying a lockdown paunch, with the rueful claim that he was in the "worst shape of his life".

It was a relatable moment, but, one suspects, a calculated one. After all, you can’t make a career of saving the planet if you don’t remind people you’re human once in a while.