Shrew not so shrewd 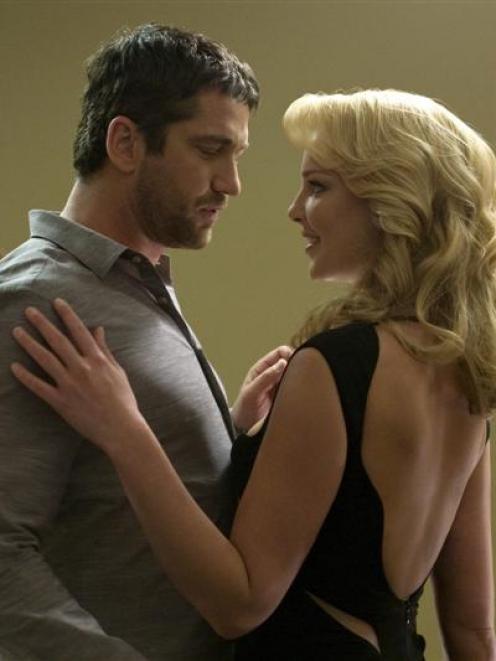 Gerard Butler and Katherine Heigl in 'The Ugly Truth'.
It is hard to know why actors abandon television gold for the silver of the screen, writes Mary McNamara, of the Los Angeles Times.

Watching Katherine Heigl attempt to inject life into yet another cardboard cut-out of a controlling, manic working woman in The Ugly Truth, you have to wonder: For this she wants to leave television?

Yes, being a movie star is still a bigger deal in America than a being a television star, and Grey's Anatomy is battle-weary, but surely the chance to portray a woman who looks as if she was constructed based on a quiz in Glamour circa 1985 is not why she entered her profession.

There are more and better roles for women in one season of Brothers and Sisters and Big Love or Damages and Desperate Housewives than there will be in an entire year of Hollywood films.

Roles that require depth and wisdom and boundless energy, that demand of their performers dramatic flexibility and exploration of character.

Roles that don't seem to punish them simply for being women.

Unfortunately, an actress who wants to be a movie star doesn't have that kind of choice, especially now that bromance has replaced romance and so many comedies seem happy to dispense with women altogether.

So it's not surprising that so many of the current crop of top actresses have tried to squeeze themselves into variations of the same part - the neurotic single woman so consumed either by her (hollow, unsatisfying) career or her many neuroses (she likes cats, she talks a lot on her iPhone) that she requires the interventions of a man, usually immature and/or emotionally abusive, to teach her the true nature of love (which often seems to involve her quitting her high-pressure, high-power job).

Sandra Bullock (The Proposal), Jennifer Aniston, Jennifer Connelly and Ginnifer Goodwin (He's Just Not That Into You, Renee Zellweger (New in Town), Isla Fisher (Confessions of a Shopaholic) and even, if you want to take it to extremes, EVE in Wall-E have all found themselves doing the Taming of the Shrew two-step without the benefit of Richard Burton or Shakespeare.

Kate Hudson and Anne Hathaway pulled an all-female version in Bride Wars (best friends turned murderous bridezillas) and Aniston pulled off a canine version last year in Marley & Me - not only did she have to accept the passive-aggressive perfection of her husband but also his unmanageably destructive dog.

Her character's one truly believable moment on screen - she breaks down after Marley has woken up the babies again - is designed to make her look wild-eyed and unreasonable.

Even Hathaway had to pay her dues in the 2006 hit The Devil Wears Prada, losing her boyfriend because, you know, she had to work. Sometimes a lot.

But Heigl is the ruling champ of the postmodern shrew, having done it three times in as many years in Knocked Up, 27 Dresses and now The Ugly Truth, which opened to tepid reviews but respectable box office.

While Heigl and other stars are stuck in narrow, nasty movie roles, women get to do just about anything on TV.

They can chase down aliens (Fringe), converse with angels (Saving Grace), race through jungles and time continuums (Lost), catch serial killers while wearing hats and high heels (The Closer) and play both sides of the legal field with the likes of William Hurt and Marcia Gay Harden (Damages).

They can even, as Heigl's Izzie Stevens has, be a model turned surgical resident with a child given up for adoption, who almost kills her lover to save him only to have him die anyway and show up as a ghost who is actually a brain tumour that may or may not have killed her mere days after her wedding to another guy.

Compared with the insulting plot of The Ugly Truth, this Grey's Anatomy plot line seems a model of depth and narrative restraint.

If Heigl wants off the networks, why not consider the pay channels, where even truly screwed-up women - Debra (Jennifer Carpenter) in Dexter comes to mind - take a stereotype, tear it to shreds and use the broken bits to make art.

Oh, TV doesn't protect women from having man trouble, but for the most part that is strictly B plot - even in Big Love, romantic and marital love play second fiddle to self-discovery, friendship, family loyalty and other weightier themes.

Which isn't to say sexuality isn't there, titillating and delicious, in most television shows.

Eventually, we hope, House and Cuddy will actually kiss; eventually there will come an episode of Bones or The Mentalist or Fringe in which the reserved and professional female lead will succumb to her charming, wisecracking male counterpart.

But it's hard to imagine that any of these women will have to be publicly humiliated, a la The Proposal and The Ugly Truth, before love can bloom.

In Damages, when Patty Hewes (Glenn Close), as genuine a control freak as one hopes to meet in this life, found out her husband had betrayed her, he was out the door so fast that his little speech about how impossible she is to love practically choked him.

The strong woman who must be saved from her own overly judgemental self is not a new conceit - Katharine Hepburn for all her trousered independence did not make a movie in which she was not overpowered, one way or another, by a man.

Even Rosalind Russell had to capitulate to Cary Grant in His Girl Friday (although in that case, her cold-blooded careerist ways were thrust back on her).

But one would assume that the films of the new millennium would have advanced women's roles beyond, say, Reese Witherspoon, the previous queen of the tightly wound, turning down Patrick Dempsey (and her career) for her scraggly-haired slacker husband in Sweet Home Alabama.