Slaughter of dolphins recorded by 'pirates' 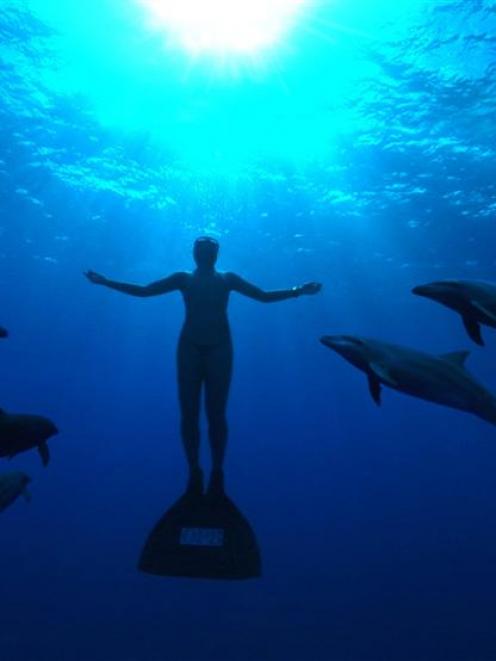 How does one expose the secret systematic slaughter of 21,000 dolphins?

It helps to have a billionaire, a dedicated activist, a neophyte film-maker, two of the world's best free divers, a former avionics specialist from the Canadian Air Force, a logistics whiz trained in transporting pop-music stars around the world, a maritime technician, a military infrared camera for night cinematography, unmanned aerial drones, a blimp and, finally, fake rocks designed by George Lucas' Industrial Light and Magic to hold secret cameras.

A willingness to risk arrest, police harassment and potentially much worse.

That was the team assembled to make The Cove, an unconventional true-life environmental thriller that brings to light mass killings of dolphins, specifically those exterminated in the Japanese port village of Taiji, south of Osaka.

The footage in the film is shocking - a beautiful Japanese bay turned red with the blood of dolphins, as well as graphic images of fishermen spearing the gentle, highly intelligent sea mammals.

Unlike whales, their larger cetacean cousins, dolphins are not protected by the worldwide ban on commercial whaling in effect since the 1980s.

Taiji, a bucolic town filled with boats bearing the images of happy dolphins, is, as shown in the film, essentially a dolphin bazaar for marine theme parks willing to pay $150,000 per dolphin.

Unselected dolphins are herded into a heavily protected secret cove where they are slaughtered for food - never mind that dolphin meat is full of mercury.

The $2.5-million film, three years in the making, was born of the friendship between National Geographic photographer Louie Psihoyos and Netscape founder Jim Clark, diving buddies who spent the past 10 years searching for the best reefs, which they soon realised were dramatically deteriorating.

Psihoyos recalls being in the Galapagos Islands and watching "long-line fishermen fishing in a marine sanctuary" and seeing "bombed-out reefs in Indonesia".

In response to the devastation, Clark launched the non-profit environmental group the Oceanic Preservation Society, and Psihoyos began working on what initially was going to be four TV documentaries about the endangered oceans and their species.

Psihoyos attended mammal conferences and stumbled upon the hero of his documentary, Ric O'Barry, in 2005.

O'Barry (68), an activist, was the original trainer of the five dolphins who played Flipper on TV and blames himself for the worldwide popularity of commercial sea parks with their live dolphin acts, a practice he now decries.

"A lot of the dolphins in the Third World are in people's swimming pools. It's a copycat syndrome," says O'Barry, a marine mammal specialist for the Earth Island Institute and leader of the Save Japan Dolphins coalition.

"People go to Sea World, and say, `Wow, I can do that.' There are dolphins all over the Caribbean and Mexico - the whole area is like a dolphin theme park with deplorable conditions. When I see them there, I feel directly responsible. I know the TV series helped to contribute to this mess. There are $2 billion in profits that come from the captive dolphins."

At the time, O'Barry was on his way to Taiji, where he has been going several times a year in an effort to stop the slaughter, often with journalists in tow, and he invited Psihoyos to join him.

Seeing the filmic potential in the trip, Psihoyos signed on, although the acclaimed photographer first took a three-day film-making course.

"We're all professionals, just not at this," says Psihoyos.

"I don't know if this movie could have been made by a professional crew. A professional crew would have turned around and run. A producer would say `This is nuts. How long is it going to take? How much is it going to cost?' There were just too many unknowns. The risk of getting hurt or jailed was daily. It didn't take film-makers to make this film. It took pirates."

The film depicts two covert missions into the cove, which is surrounded by razor-wire fences and policed by vigilant fishermen desperate to keep their business out of the spotlight.

There were 14 cloak-and-dagger operations into the cove to accumulate enough footage, and a runner who spirited the film out of town.

"The reality was a lot scarier than the film shows," Psihoyos says.

"We got run out of town by the police twice."

These days, when O'Barry travels to Taiji, he wears a disguise.

Clark brought in another diver buddy, actor-film-maker Fisher Stevens (Short Circuit) to produce and comb through the nearly 600 hours of film.

Stevens insisted that Psihoyos be the on-screen narrator, providing a charismatic figure to tell the story.

"He didn't want to do it at first," recalls Stevens.

"The idea was this is not a just a documentary - it's more like a thriller."

Psihoyos and O'Barry hope the film will generate awareness and change the situation in Taiji.

Japan has opposed extending the international whaling ban to dolphins.

Speaking before the film's commercial release, O'Barry said, "[The Japanese] don't know this tsunami of bad publicity is coming their way.

In Japan, they call it `giatsu' which translates into `external pressure' ... [This] movie is giatsu on a massive scale".