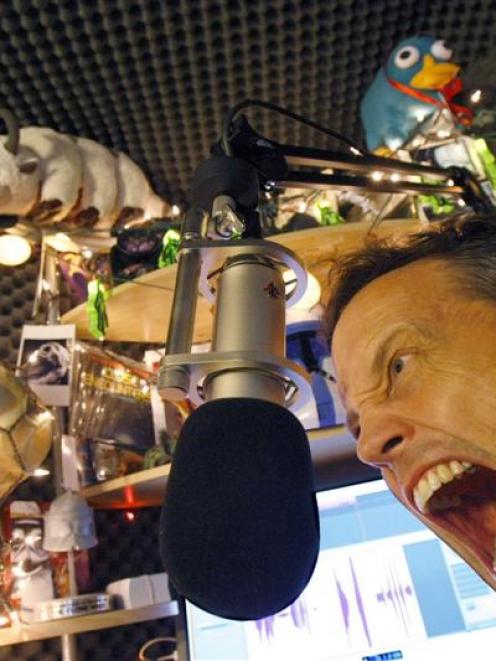 Gaming Veteran voice actor Dee Baker, who is featured in SpongeBob SquarePants, Ben 10 and Star Wars: The Clone Wars, says a proposed SAG contract for video game voice recordings would mean doing more work for less money. Photo by LA Times.
When Dave Wittenberg began his acting career at a community theatre in Boston, he did not imagine he would be making his living as a voice artist for video-game characters, portraying the likes of Hades, Tweedledee and Jerry Seinfeld.

But for the past decade Wittenberg's voice has been heard in more video games than he "can remember".

And, although it's not the traditional actor's stagecraft, he still draws extensively on his thespian skills.

"You get to create characters you wouldn't be able to create in any other medium," said Wittenberg (38).

"From an acting standpoint, it lets you flex your muscles that you wouldn't ordinarily use."

"What it's not doing, however, is fattening his wallet.

Despite his extensive credits, Wittenberg earns roughly $US30,000 ($NZ43,000) a year from his video-game work and, like most of his peers, supplements that income by doing voice work for animated TV shows.

Wittenberg is one of hundreds of Hollywood actors who perform in the heard-but-not-seen world of voice acting, breathing life into the virtual worlds of such blockbuster game franchises as Halo, Call of Duty and Grand Theft Auto.

The video-game sector, once a backwater in Hollywood, has been the fastest-growing segment of the entertainment industry and increasingly competes with movies and television for consumers' attention and dollars.

As games have become more like big-screen movies, so has their need for more sophisticated stories and emotionally engaging characters.

Games once had practically no dialogue, but now boast tens of thousands of lines of it - creating opportunities for actors at a time when traditional jobs are shrinking because of studios' cutbacks in film and TV production.

But the enthusiasm for the new medium has been tempered by a growing unease among many performers that their pay for voice work in video games isn't keeping pace with the industry's breakneck growth.

Although it's down this year amid the recession, United States video-game industry revenue has more than doubled since 2005 to $21 billion in 2008 - about twice the amount of movie ticket sales in Canada and the United States.

The concerns have fuelled a standoff between the video-game companies and the Screen Actors Guild, whose members recently rejected a proposed contract that covers voice work in the industry.

"The concern going forward is that as these games become larger and larger and generate more income, we as actors won't see any more money when we walk out the door," Wittenberg said.

Attorney Scott Witlin, who represented video-game publishers in the recent labour negotiations, disputes the notion that actors are short-changed.

"If you look at the total contribution either in terms of hours that go into the creation of a game or the earnings of the people who make the games, voice talent represents a minute percentage," he said.

The voices in about 80% of video-game titles are performed by actors who don't work under a guild contract.

"It's not so much their argument is weak or strong," said Jonathan Handel, an adjunct professor at the University of California, Los Angeles' School of Law who specialises in entertainment labour law.

"The overarching issue for any union making a deal is: who has the leverage?" There were practically no roles for actors in video games until the mid-1990s, when technical innovations made it possible to give speech to the digital characters.

Dialogue instead appeared on the screen like subtitles on a foreign-language film.

"It used to be that there wasn't very much data available for voice acting, and what we had tended to be cartoonish," said Casey Hudson, director of the Electronic Arts game Mass Effect 2.

Later, with the advent of higher-capacity compact discs, characters started to speak.

But voices were still often performed by amateur actors or even the game developers themselves, because many companies didn't think spoken dialogue was important enough to merit spending money on professionals.

In the past decade, however, as the video-game industry has transitioned to DVDs and the storytelling ambitions of many game developers have blossomed, hiring experienced actors has become routine.

The use of actors in games varies depending on the genre.

Some titles include far more speech than a feature film.

Mass Effect 2, a science-fiction game, has 90 actors playing 546 characters who speak about 31,000 lines of dialogue.

Actors not only performed voices but also acted in motion-capture suits for non-interactive story sequences - called "cut scenes" - that totalled about 90 minutes.

"We basically made a feature film at the same time that we made a game," said Uncharted 2 director Amy Hennig, who worked with an experienced theatre director to oversee acting.

"Good performances are critical so that players maintain an empathetic association with the character who they control."

Largely because of the industry's roots in the software business, video-game creators have traditionally been compensated very differently from creative workers in Hollywood.

Unlike talent in movies and TV shows, they don't receive residuals, or additional fees for the reuse of their work. "In our business we're all employees and any upside we get is purely discretionary, so many of us are not going to have a lot of sympathy for actors who want back-end residuals," Hennig said.

"That's why we're talking two different languages when we sit down at a bargaining table."