Kidman says 'Australia' may be her final film 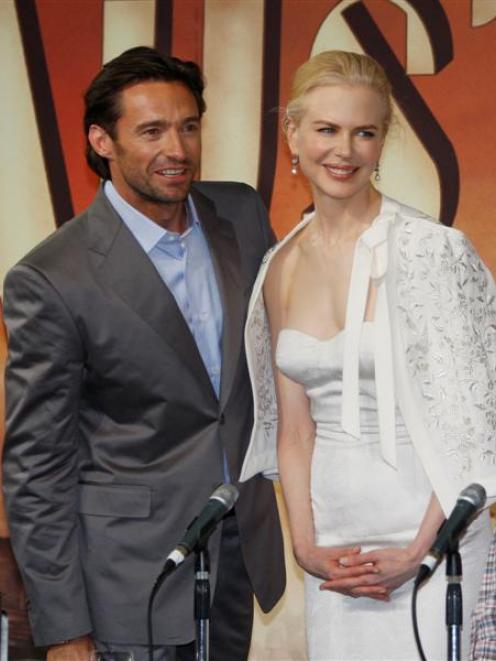 Australian actors Nicole Kidman and Hugh Jackman pose for photos prior to the start of a press conference for the movie 'Australia'in Sydney. (AP Photo/Mark Baker)
Nicole Kidman says Australia may be her final film as she concentrates on motherhood.

Speaking at a press conference in Sydney with director Baz Luhrmann and the cast of Australia, Kidman said she may decide to extend her family instead.

"I'm in a place in my life where I have had some great opportunities. I may just choose to have some more children," Kidman said.

"I have no idea what is in my future, but I'm very at peace with where I want to be." "There are many things I want to do besides act."

It was hot and dusty during filming in one of the world's most remote locations. But Kidman says the prospect of a smooch with Hugh Jackman eased the troubles of working on the Outback romance.

"Obviously we're in character when we kiss, but it was good to go to work," a laughing Kidman told the news conference ahead of the worldwide premiere of the film, in which Kidman's prim British aristocrat character falls in love with Jackman's rugged cattleman in World War II-era film.

"It was hot. Literally hot," quipped Jackman, who first came to prominence in stage musicals and whose Hollywood star is rising thanks to films such as the X-Men franchise.

With a budget reportedly of $120 million or more - which would make it the most expensive ever made in Australia - the new film carries high stakes for its largely homegrown team, including director Baz Luhrmann, Kidman and Jackman.

"Rarely do you get to make a film that you've dreamed of doing since you were little, which is to be part of the Australian cinema. I haven't really had a film that's done that in a big way," Kidman said.

Much of the filming took place during the hot and humid summer months in northwestern Australia, on a remote ranch in the Kimberly region and in Darwin, where the characters become caught up in Japan's bombing raids.

Luhrmann, director of the colorful, eccentric Moulin Rouge, said he wanted to create a period drama about "the far away," and on a more personal level, discover his home.

"We have amazing landscapes and historical events," Luhrmann said of Australia. "Epics are made of these things."