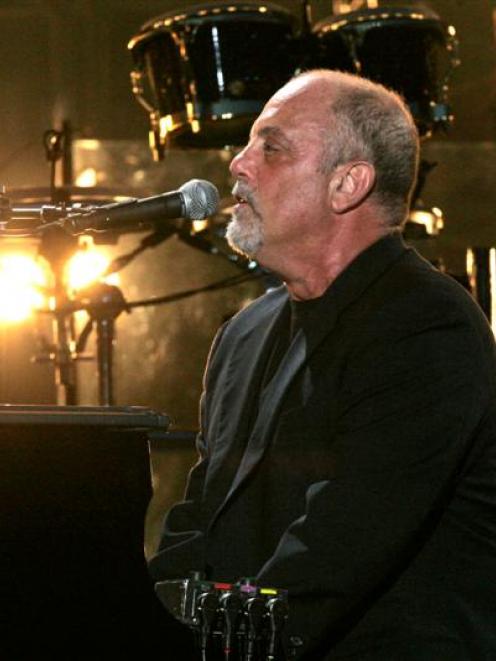 Titled Last Play At Shea, the shows will be the final concerts to be performed at the baseball stadium, which is due to be demolished next year.

Joel opened the show with The Star-Spangled Banner, bringing the crowd of 55,000 to its feet.

"I remember when this place was built, and now they're tearing it down," the 59-year-old New York native told the audience.

The Beatles opened their 1965 North American tour at Shea to a record audience of 55,600, becoming the first band to hold a concert at a major outdoor stadium.

The stadium has also played host to bands like Led Zeppelin, The Who, The Police, Simon and Garfunkel and The Rolling Stones.

Last night, Joel paid tribute to the historic Beatles gig, including the Fab Four's classics A Hard Day's Night and Please Please Me in his set.

He also got a little help from his friends, who joined him in celebrating the occasion.

Crooner Tony Bennett received a hero's welcome when he joined Joel on stage to sing New York State of Mind.

The 81-year-old Bennett paid tribute to his home town as "New York, capital of the world".

The Eagles' Don Henley rocked out with his solo hit The Boys of Summer, a nod to the New York Mets baseball club, which calls the stadium home.

John Mellencamp got the crowd feeling patriotic with his rock anthem Pink Houses, while John Mayer was welcomed onstage to play guitar with the piano man.

Joel's set, which ran for almost three hours, included many of his best-loved hits, such as She's Always a Woman, River of Dreams and You May Be Right.

Joel will tour Australia in November and December, with dates in Perth, Adelaide, Melbourne, Brisbane and Sydney, as well as Auckland in New Zealand.

Mellencamp will also be touring the country at the same time, sparking hopes their on-stage collaboration last night will not be a one-off.