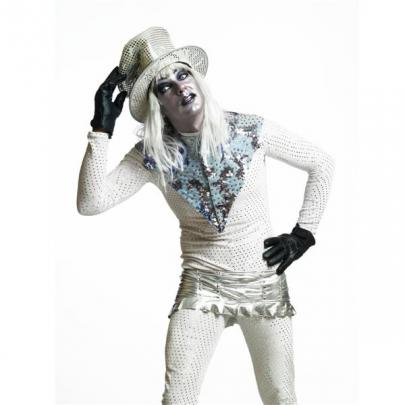 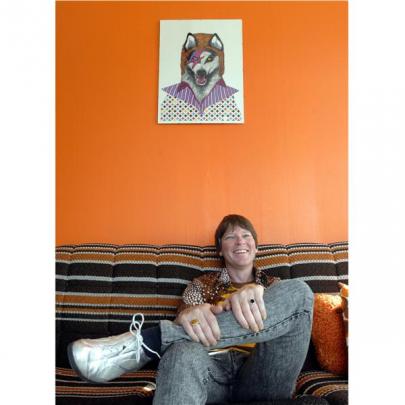 The decade that taste forgot is the one Ian Chapman chooses to remember. Nigel Benson steps back.

To the right of the garage door a large butterfly is perched on the side of the house.

"I bought the house because of that butterfly," he grins as we walk inside.

"I spent a couple of hundred grand on a house because it had a $20 butterfly on it."

He rises every morning to circa 1975.

"The glitter ball has never stopped turning for me," he says, as we pass a glam-rock mannequin under the internal stairwell, welcoming terrestrial visitors.

There is also a collection of glittered platform boots to navigate before we get upstairs to the living area, which is a veritable '70s time capsule.

You half expect Mary Tyler Moore to pop around the corner with a tray of home-made muffins.

"Everyone identifies with the decade of their youth, and I love the '70s," Chapman continues from the comfort of a brown, orange and white - '70s, of course - couch.

To Chapman (49), it was a time of infinite possibilities.

"A lot of people think very fondly of the '70s. It was a time when fearlessness, idealism and experimentation clashed head-on with conservatism and cultural cringe," he says, glitter nail polish flashing.

"A huge influence for me was Alistair Riddell and Space Waltz with their 1974 hit Out on the Street. It was New Zealand's answer to Ziggy Stardust and the Spiders From Mars. To my youthful eyes, suddenly a New Zealand male didn't have to aspire to being an All Black. We had a new, far more exciting, role model.

"Fashion knew no bounds. New Zealand male fashion went somewhere it had never been before and will probably never go again. Businessmen were walking around in coloured suits, with four-inch-wide ties and stacked heels. We'll never see anything like that here again."

Chapman has revisited the decade he never truly left for his first book; Glory Days: From Gumboots to Platforms - a paisley-shirted kaleidoscope of New Zealand culture in the 1970s.

"It was a time when platform shoes roamed the Earth and polyester ruled the catwalks, and I figured it was high time the '70s were given their due," Chapman says.

"For me, the biggest sub-cultural thrill and a real life saver in the slow death-by-a-river environs of '70s Hamilton, was glam rock. Glam rock wasn't as big in New Zealand - bastion of black singlets, gumboots and real men - as it was in the UK and other places, but it still made a big impact on the cultural landscape. All of a sudden, you could go out on the town in platform shoes. And punk was just as cool, too, eventually having an even bigger impact."

For Chapman, who grew up "in the concrete jungle of Hamilton suburbia", it was a revelation.

The book also tells New Zealand's coming-of-age story, as our traditional ties with Mother England weakened and we began to stand on our own economic and political feet.

"We were addressing issues like sexual liberation, nuclear weapons and biculturalism. It was also a time that we were standing up for ourselves internationally. We were starting to find our own voice and were finding that our views were not always in harmony with our traditional allies. I was so proud of the Mururoa protests."

More than 333,000 signatures, representing over 10% of New Zealand's 3 million population, were gathered in 1976 protesting the French nuclear bomb testing on Mururoa and Fangataufa atolls.

The protests sowed the seeds for the New Zealand Nuclear Free Zone, Disarmament, and Arms Control Act, introduced by the Labour Government in 1987.

"Some people still think it was the decade that taste forgot, but the '70s was really an era of sartorial elegance. It's just often been overshadowed by its attention-grabbing sister, the '60s," Chapman says.

Chapman left the lush green grass of the Waikato to chase glitter and bright lights.

During the '80s he worked as a professional drummer, with acts such as Billy T. James and Rob Guest, and on the pub circuit with covers bands and prototype toy-punk Waikato band Roger Ramjet.

He arrived in Dunedin in 2002, to join lecturers Graeme Downes and Rob Burns in teaching Otago's new rock music degree.

Chapman is also in the final stages of completing a PhD in music iconography, studying glam-rock artists such as Kiss and David Bowie, and following on from his master's in the same field.

Which brings us nicely to his alter-ego - "Dr Glam".

Dr Glam revealed himself to the world on September 8, 2007, in a concert at Backstage in Dunedin, with fellow lecturers Rob Burns and Dan Bendrups, Dunedin jazz impresario Trevor Coleman and jazz drummer Frank Gibson.

The first Dr Glam album, the jazz-infused Glitterspreader, was recorded in Dunedin and Auckland and released in September last year, followed by Dr Glam's "Freaks Cabaret" performance at the Dunedin Fringe Festival earlier this year,The next Dr Glam recording, a glam-goth rock album, is scheduled for release next year.

"I've put the wicked world of jazz to one side for the moment and gone back to my first love," Chapman says.

"Dr Glam really came about because I wanted my students to grasp the transformational potential of developing a performance persona. And the best way to get the message across was to use myself as a living model," he says.

"Often our students are excellent practitioners, performers or songwriters, but their overall potential is undermined by what happens to them physiologically, mentally and emotionally on stage.

"Developing a persona helps overcome that. And it's not fake - I'm not asking them to become someone they are not. It's more a case of identifying and overblowing the most pertinent parts of one's own personality for the performance situation, while suppressing the negative bits that get in the way.

"Seeing students on stage, transformed, is awesome. And the confidence they get from that experience stays with them and helps them in other areas of their lives," Chapman says.

"Both personally and in my role as a teacher, I've got an enormous regard for the power of reinvention and transformation."

Dr Glam and his band, The Mysterons, perform live at Refuel at 9pm on Friday, October 9.

Glory Days: From Gumboots to Platforms is published by HarperCollins New Zealand (RRP$39.99) and will be teleported into bookshops on October 1. The book will be launched at the University Staff Club on September 30.