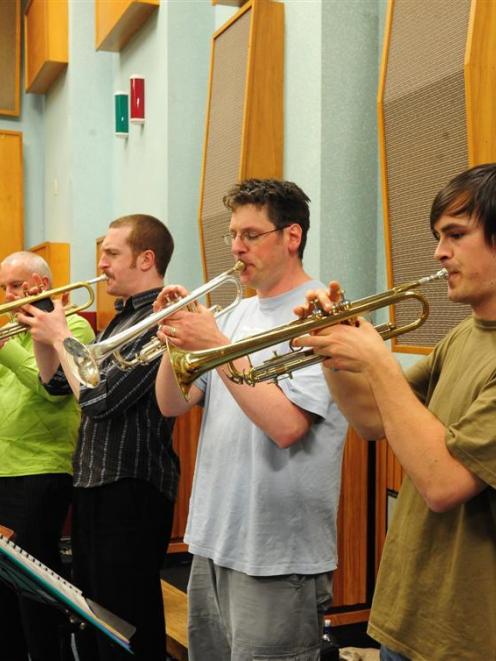 Calder Prescott and the Dunedin Jazz Band record in the Albany St studios on Monday night. Photo by Craig Baxter.
He's been counting the Dunedin beat for more than 50 years, and along the way he has instilled a love of jazz in new generations. Nigel Benson catches up with Calder Prescott.

Calder Prescott MNZM has been performing with Dunedin jazz groups since 1956.

Even the telephone-answering machine at his home offers the cheerful greeting "Hello, jazz lovers" before fading into a sultry Diana Krall track.

It has been a trip down memory lane for the self-described "jazzer".

"It's a marvellous facility and it's been really nice recording there again and thinking about the days I went down to the old NZBC [New Zealand Broadcasting Corporation] to play with big bands," he recalls.

"There was a big band in the four main centres and it used to broadcast over 4YA in those days at 9.30 on Friday nights. That was the pop idiom of the day."

"My motto has always been that old Duke Ellington single 'It don't mean a thing if it ain't got that swing'."

One of his proudest legacies, though, is his 40-year involvement in jazz education with young musicians, such as the Logan Park High School Jazz Band.

In 2002, Prescott was made a Member of the New Zealand Order of Merit for his services to jazz.

He founded the Dunedin City Jazz Orchestra in 1988 for both young and senior musicians, and it is now recognised as one of New Zealand's top big bands.

"I've got no idea what we're going to call the album, but we got 10 tracks down and we'll hopefully get it mixed by Christmas and then release it some time next year."

It has toured widely overseas in Australia, the United States, Switzerland, Germany, The Netherlands and England.

"Jazz has been good to me. It's taken me around the world and I've had the opportunity to play with hundreds of marvellous musicians. Jazz is a worldwide phenomenon. I've been to countries where you can't speak the languages, but we can all fit a tune together," Prescott says.

And there is no chance of Mr Jazz abandoning the ivories in the near future.

"I'll keep playing until people don't want to hear me any more," he chuckles.

"And then I'll go into my studio and just play on my own."