Everyone enjoys a birthday treat at the town hall

Lorde was enjoying the celebrations as much as the crowd as Dunedin’s Town Hall became an intimate birthday party last night.

New Zealand’s pop queen played in the city for the first time since 2014 yesterday.

The scene was set by Wellington rock trio Mermaidens, who warmed concert-goers with their hypnotic tones.

Then the curtain dropped revealing the word ‘Melodrama’ and a retro bedroom with old televisions front-of-stage flicking through channels.

Lorde bounced into view and opened with club bangers Homemade Dynamite and Disclosure.

She confidently "ugly danced" across the stage and was at ease in the intimate venue, which added an electric atmosphere. 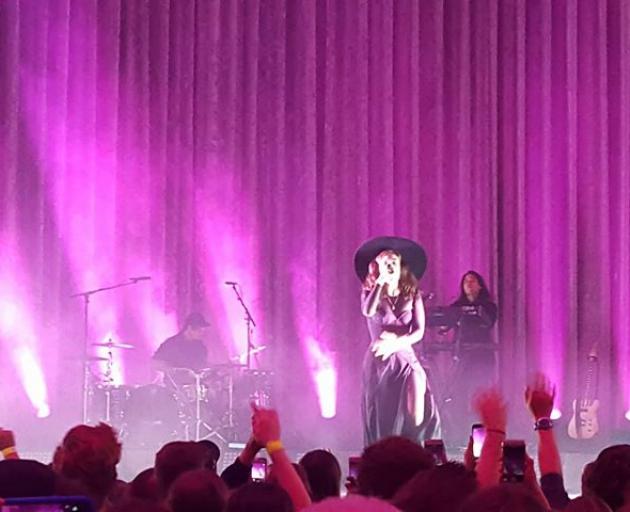 The singer looked overwhelmed as 200 people chanted Happy Birthday to celebrate her 21st.

"Holy s***, we are playing a show in New Zealand on my birthday," she said when she first addressed her followers.

Looser sections of the audience seemed disappointed when she admitted no intention to down a traditional "yardie", but were appeased when she said she might later drink a shot.

The shrieking of fans never died out as she switched between early hits like Royals and Team mixed with the newer Perfect Places and Sober.

The room was illuminated by cellphone light during the chillingly sincere Liability for which the crowd chanted along.

During the brief encore of Loveless she draped herself in a New Zealand flag thrown on stage by Dunedin superfans, before slipping away.

During the show Lorde spoke of playing at the same venue years earlier and how it seemed enormous, but said it felt less giant on her return.

In her early years many were critical of her slightly awkward stage presence and perceived lack of confidence, but last night everyone was under her spell.