On the Floor: Serious glitter 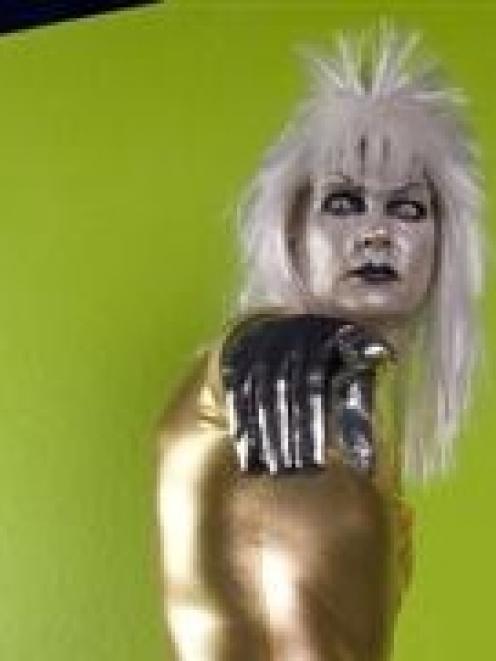 Dr Glam aka Ian Chapman
In these days of '80s retro - anyone wearing fluoro, I'm looking at you - there is at least one individual in Dunedin who is still firmly in the 1970s.

Dr Glam, also known as University of Otago lecturer Ian Chapman, is releasing his debut CD tonight with a gig at Sammy's.

Chapman says he is proud to be glam for a few pretty good reasons.

"Because glam - in its purest form - is musical and visual escapism at its finest. But I don't like to limit 'my' glam to just what we think of as 'glam-rock'. I see the glam aesthetic as a transferable commodity.

"It's the realisation and harnessing of the power of personal reinvention, and I believe that can take place with high-end jazz as the soundtrack just as easily as simplistic glam rock.

"In the '70s I was a glam rocker and then a punk and then, well the decade was over and everything just went bleauuuchhh . . . But that says more about me than it does about the music of the '80s, some of which was great."

"It's a tuned percussion instrument made of steel and brass that you play with your hands. Well, that's the boring bit of the description anyway. The cool thing is, it looks like a flying saucer.

"It taps straight into every trashy sci-fi movie you've ever seen. As I've alluded to, for any music to light my rocket it must be both aural and visual. This instrument is stunning in both regards.

"Apart from its freaky looks, it sounds like nothing else on earth and might just as well have come from outer space. Well, it's from Switzerland, so that's close.

"For a '70s glam rocker who is still in love with Penny from Lost In Space, there is no better instrument for self-expression than a replica of the Jupiter 2."

The CD was recorded partly in Dunedin and partly in Auckland, with the finest of musicians from both centres.

The core of the Dunedin lot are members of the band Cambio, while the Auckland contingent are from Dr Tree.

There is no prize for picking Chapman's glam idol.

"David Bowie. No question. It's simple. When I was 13 my life was 14 kinds of ****, largely the result of hardcore bullying. But I hold no grudges.

"Anyway, I totally escaped into the fantasy world that Bowie managed to so convincingly create. Sure his 'world' in itself was make-believe, but the lesson within the process was that you can maintain enough control within to create things for yourself.

"You don't have to put up with what the world deals out. Reinvention is the name of the game. If one persona isn't working for you, change it.

"The notion of a single 'true' self is flawed. We all have masks and behavioural/visual/emotional alternatives. That message - wherever it might be gleaned from - is invaluable, I believe.

"And for me, it was Bowie who opened my eyes to it."

His only words of advice for those wanting to try the gold platforms of glam on for size: "Do it full-on or don't do it at all".

"As you can tell, I see glam as having an underlying fundamental ethos that belies its oft-assumed superficiality. So go hard or go home. Be prepared for the non-believers.

"Glam is not merely about dress-up. It's not merely a themed 21st birthday party. The look might be superficial to other's eyes, but your attitude should never be."