Honouring the history of his music 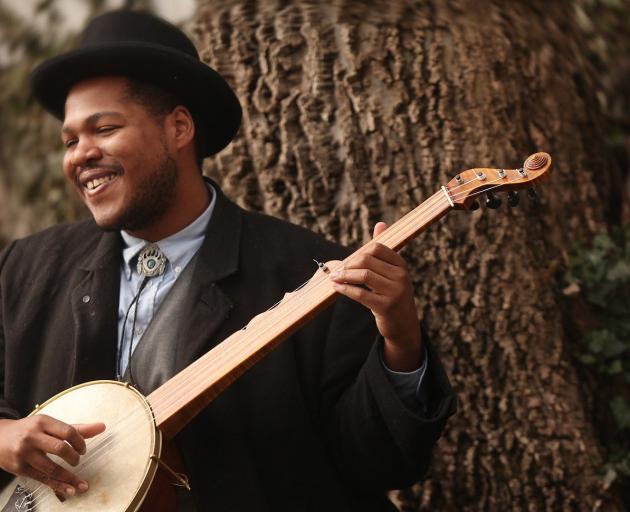 Multi-instrumentalist Jerron "Blind Boy" Paxton draws in particular from pre-war blues and jazz. Photo: Supplied
Chances are you haven’t heard the name Jerron Paxton before now. The odds might be improved if I tell you his stage name Blind Boy Paxton.

In any case, there will be the opportunity to get to know him better when he plays in Dunedin in February.

Talking to Paxton at his home in Queens, New York, earlier this week, I got the sense that this 30 year old is advanced beyond his years in terms of being a pilgrim for blues music, especially country blues. It’s almost like interviewing Skip James or Blind Lemon Jefferson back in the late 1920s.

Despite a scratchy phone line it quickly becomes apparent that Blind Boy Paxton is a staunch advocate of the blues and, even though he’s only 30 he’s invested a lot of time and passion in tracing the music back through history. To say he’s a take-no-prisoners sort of guy is an understatement.

"Our family’s history goes back around 8000 years," he says.

"Of course, around 1492 in Africa things got a little rough for us and the rest of that part of our story you can read in the history books about the Americas. Anyway, then my family starts getting the blues around 1620. When us African people landed in the Americas that’s when the blues started to take root in my family. That’s when black Americans got the blues. You don’t find the blues in Africa.

"For obvious reasons the people who remained in Africa weren’t as oppressed as we were over here. And we began to bring all the different influences as we began to create our own culture. There’s very little in the way of traces from Africa. So when we arrived in America, that’s when the blues really starts.

"There’s one early part of the music that does hark back to Africa, and that’s with the banjo, which is one of the instruments which I play. But a lot of the melodies and sounds come from here, they’re American inventions."

Paxton’s grandparents chose to move from Louisiana to Los Angeles, in search of a better future for the generations to come.

"My grandmother was making sure that I would stay away from picking cotton, as our family had done for generations," Paxton says.

"I started playing the fiddle when I was quite young. Any kind of music that I could get my hands on really. The blues definitely. It was never not the blues. Blind Lemon Jefferson, Skip James, Blind Blake. Those are the people, they were the first records I heard being played in my house. That’s all I listened to until I was about 14 or 15. And then when I learned how valuable these guys were I pursued that sound even more.

"Then I moved to New York and spent four years at college. For all my life since then I’ve been a musician."

Paxton’s been to New Zealand before — but not to Dunedin.

"I’ve been all over the UK and lots of other places. Fact is it’s easier to talk about the places I haven’t been. I haven’t been to Africa yet.

"I’ve been poor for most of my life and it feels good to be now enjoying the alternative. I hope that the good folks in Dunedin will come to hear me presenting my culture."

Billy Boy Paxton provides a rare opportunity to hear country blues reminiscent of the 1920s and 1930s. In the US most of the active blues and blues-rock acts are made up of white guys — the notable exception being Christone "Kingfish" Ingram.

While channelling different eras and styles, Kingfish and Blind Boy Paxton together demonstrate that the blues is alive and well.