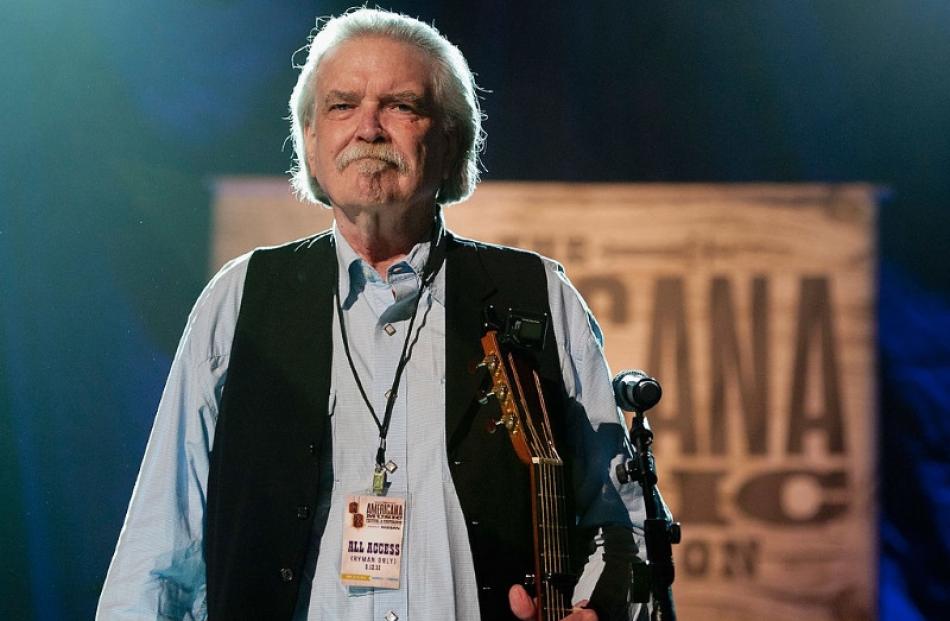 Texas singer-songwriter Guy Clark, whose songs have influenced and been recorded by at least two generations of singers and who also served as a mentor to a bevy of songwriters who followed in his footsteps, has died after a long illness, his longtime friend and biographer Tamara Saviano said in a statement. He was 74.

Clark died at his home in Nashville, Saviano said.

"Guy was wearing his favourite pink Shawn Camp T-shirt as he died peacefully," a reference to the Arkansas singer-songwriter who was one of the many younger musicians Clark admired and advised. "My heart is broken."

Clark earned the respect of peers and younger disciples in progressive country and Americana music for richly literate songs about a broad swath of humanity as expressed in works such as 'Desperados Waiting for a Train', 'L.A. Freeway', 'The Randall Knife', 'Texas, 1947' and 'Boats to Build'.

Those songs earned him Grammy Awards, election to the Nashville Songwriters Hall of Fame and the Academy of Country Music's Poet's Award.

"I would not be the songwriter I am if I hadn't sat at your table and learned from a master," Rosanne Cash, Johnny Cash's daughter, posted on Twitter on Tuesday. "Travel safe, old friend."

After living briefly in Los Angeles in the early 1970s, while working in the factory that makes Dobro resonator guitars, he wrote 'LA Freeway', in which he evoked the struggle of artists of all stripes who have come to the city and strived for success without turning their dreams into reality.

"Throw out them LA papers,
And that moldy box of vanilla wafers,
Adios to all this concrete,
Gonna get me some dirt road back street,
If I can just get off of this LA freeway,
Without getting killed or caught,
I'd be down that road in a cloud of smoke,
For some land that I ain't bought."

He wrote the song referencing the Long Beach Freeway, which he drove daily to the Dobro factory, but changed it to the nonexistent 'LA Freeway' because it would create a more recognizable image to those not familiar with the Southern California freeway system.

Guy Charles Clark was born November 6, 1941, in Monahans in West Texas, and raised largely by his grandmother while his father served in the military during World War II.

"The family lived at his grandmother's 13-room shotgun hotel, home to bomber pilots, drifters, oilmen and a wildcatter named Jack Prigg, the subject of Clark's famous song 'Desperados Waiting for a Train'," Saviano wrote in announcing his death.

In 'Randall Knife', he paid homage to his father and to the tradition of American craftsmanship, writing:
"If you've ever held a Randall knife,
Then you know my father well,
If a better blade was ever made,
It was probably forged in hell."

He was a star athlete who played football, basketball and track and field, participated in theater and his school's debate team, won science fairs, and came to love flamenco guitar and Mexican music as a boy.

In his early 20s, he joined the Peace Corps, and then moved to Houston and opened a guitar repair shop with his friend Minor Wilson.

After Clark and his wife, painter Susanna Clark, moved to Nashville after the stint in Los Angeles, Ricky Skaggs scored a No 1 country hit in 1982 with Clark's song 'Heartbroke'.

Clark then appeared on the charts himself the following year with the song 'Homegrown Tomatoes'.

He was among a group of Texas-bred songwriters that included Mickey Newbury, Townes Van Zandt and Kris Kristofferson. They served as role models to a younger class of maverick musicians including Lyle Lovett, Joe Ely, Steve Earle, Rodney Crowell and Nanci Griffith.

Clark's compositions were also recorded over the decades by dozens, if not hundreds, of artists, including Johnny Cash, Emmylou Harris, George Strait, Vince Gill and the Highwaymen, the super-group consisting of the elder Cash, Kristofferson, Willie Nelson and Waylon Jennings.

"Guy Clark always talked to me no matter who I was standing by when we'd see each other," singer-songwriter Allison Moorer tweeted Tuesday. "He was a rare combination of gentleman and master."

Saviano recently finished writing her biography of Clark, which is scheduled for publication in October. She said she spent at least 60 hours interviewing Clark over the years for 'Without Getting Killed or Caught: The Life and Music of Guy Clark'.

Susanna Clark died of complications from lung cancer in 2012, around the time Clark's health had deteriorated to the point where he stopped touring and recording.

Funeral arrangements are pending, Saviano said, but Clark left instructions for what he wanted when he died in 'Homegrown Tomatoes':
"When I die don't bury me,
In a box in a cemetery,
Out in the garden would be much better,
I could be pushin' up homegrown tomatoes."