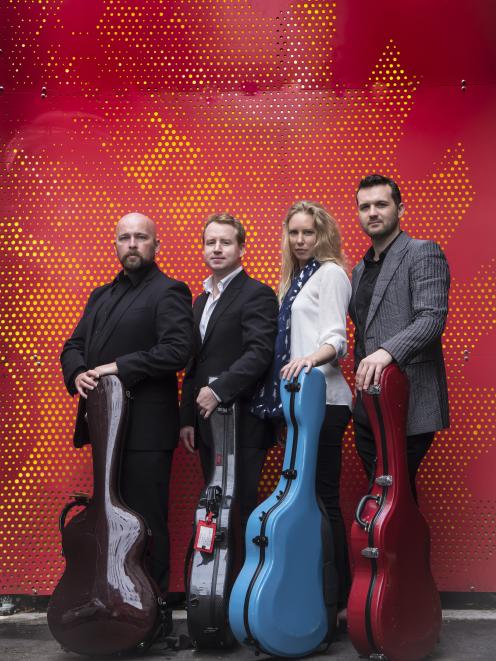 They have performed in towns all around Dunedin, but never the city itself. Rebecca Fox discovers the New Zealand Guitar Quartet is about to change that.

Curry, who co-founded the New Zealand Guitar Quartet with partner Owen Moriarty, is at the forefront of the movement as the only full-time tenured classical guitar lecturer at the New Zealand School of Music, University of Wellington.

Her classes attract a full house and it is the largest classical guitar programme in the country.

''The guitar as an instrument is popular. A lot of people have one knocking around the house whether it's steel string or nylon string: the guitar as a sound-producing entity is popular. The style is different, the classical guitar requires commitment to learn how to play it.''

While classical guitar had its heyday in the 1970s, Curry believes it is

''There was a cohort of my contemporaries who were studying at university who went and pursued postgraduate overseas.

''We went away, studied, did competitions, developed a skill level that can only be developed when you are in a bigger, more competitive environment and then came back.

Now the teaching they have been doing is filtering through.

''I've got students going overseas and pursuing postgraduate, which is really exciting. [It's] my dream come true in what I'd wish for my students and they're now gathering momentum with their teachings.

''I'm now just starting to have auditions from students taught by my students.''

Curry juggles educating the next generation of classical guitarists with her own playing schedule, having recently performed with Orkiestra Ars Longa (Krakow Music Academy, Poland) the Aorangi Symphony (New Zealand) and the Capital Concert Orchestra (Canberra) as well as her commitment to the New Zealand Guitar Quartet.

As Moriarty had a lot of guitar quartet experience when the couple returned to New Zealand, they sought out other guitarists to join them in a quartet.

The guitar quartet allows her to play a range of musical styles, Curry says.

''It's part of the guitar; it can be a musical chameleon which appropriates different music voices.

''The music itself is quite attractive. Last year, we played an Arts on Tour, 20 concerts in the South Island, and our programme was a real mix of musical styles; it drew on bluegrass, flamenco, celtic, and people seem to really like that.''

Together the guitars have a combined impact much greater than they would on their own.

''Also it's much nicer being on the road with colleagues. It's quite a solitary thing to tour as a soloist.''

That collegiality is also important as the guitar, like the piano, requires plenty of practice.

''So any opportunity to work with people is a great one.''

The New Zealand Guitar Quartet is at the leading edge of a classical guitar renaissance.

Curry and Moriarty have been together about 20 years after meeting at university. They both teach by day - Moriarty has a private studio and teaches in schools - and practise at night. They are also active in the Wellington Classical Guitar Society.

Moriarty also looks after a lot of the arranging for the quartet, taking music and arranging it to suit a quartet.

The quartet also believes it is necessary for its career and its development to commission work specifically for the group.

Curry and Moriarty are joined in the quartet by John Couch and new member Vladimir Gorbach. Both are based in Australia, one in Sydney and the other in Canberra.

Couch comes to New Zealand every couple of years to hold a summer school in New Plymouth for budding guitarists, while Gorbach, head of guitar at the Sydney Conservatorium of Music, is the newest member of the quartet.

''He is one of the best guitarists in the world and we are extremely fortunate to be graced with his presence. It's a real joy to make music with such accomplished musicians.''

While Gorbach has a typically Russian-sounding name, he is quite antipodean in his laid-back approach.

Separated by the Tasman Sea, the members of the quartet are forced to do ''intense'' preparation on their own before putting in some ''gruelling'' rehearsal days prior to assembling for a concert.

''We hopped over to Australia a couple of weeks ago for three to four days of rehearsal and recording in preparation for this concert. It's very tight.''

In the June 9-10 concerts with the Dunedin Symphony Orchestra, the quartet play Joaquin Rodrigo's Concierto Andaluz, under the experienced baton of Kenneth Young.

''He's contributed some special music for the guitar.''

Written in 1967, the concerto for four guitars and orchestra is inspired by Andalusian folk music and references several different dance forms, including the sevillanas and zapateado.

The concerto is a celebration of virtuosity and Spanish temperament, and was dedicated to legendary guitar quartet Los Romeros.

''It's energetic and exciting. It is cheerful and upbeat then slow and dramatic with an introspective middle movement. It draws on lots of popular Spanish dances.

''It's probably one of the most fun concertos for guitar.''