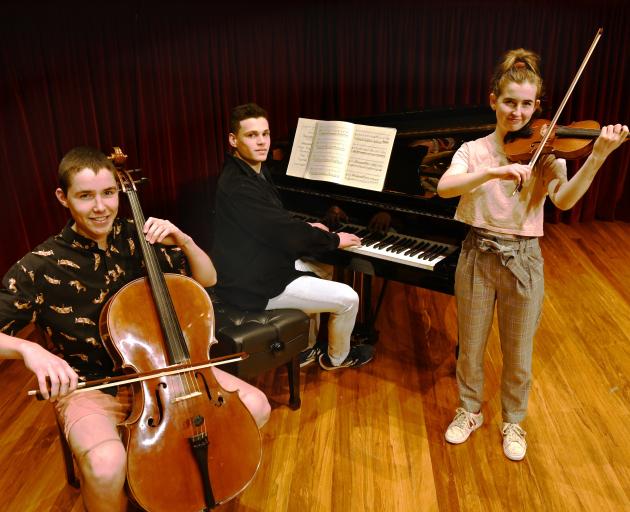 Concerto competition finalists (from left) Boudewijn Keenan, Abhinath Berry and Rose Stevenson rehearse at Marama Hall for their performance at Dunedin Town Hall. PHOTO: LINDA ROBERTSON
Three young Dunedin musicians will have the rare opportunity to perform alongside the Dunedin Symphony Orchestra next weekend. Rebecca Fox talks to them about nerves and their love of music.

Having given up much of their summer to practising their musical instruments, three young Dunedin musicians are now reaping the rewards.

Rose Stevenson, Boudewijn Keenan and Abhinath Berry will walk out on the stage of the Dunedin Town Hall next weekend to perform solos backed by the combined Dunedin Symphony Orchestra and Dunedin Youth Orchestra — a first for the orchestras and the young musicians.

The trio are the finalists in the first Dunedin Concerto Competition, having been selected from a group of 30 young musicians ranging in age from 12 to 22 in preliminary rounds in March.

Their "prize" is a chance to perform with the backing of a full orchestra.

For the first half of the programme, conducted by Peter Adams, the DYO will perform with the highlight, Schubert’s unfinished Symphony. The second half will be the combined orchestra with the three soloists.

Stevenson, a second-year University of Otago music student in classical performance violin and composition, is over the moon that her practising during the summer has paid off.

While she has played with the Dunedin Youth Orchestra, she is aware playing with the DSO is another step up.

"To be actually a soloist is another experience, it’s pretty amazing, really."

She has been playing violin since she was 6 after first being inspired by seeing a cellist play.

"I really wanted to play an instrument."

It is being on stage performing that really attracts Stevenson. She also plays electric violin in an indie-rock band, something she really enjoys as well.

"I’m not that keen on practising but I make myself, as I know performing is so much fun."

Stevenson (19) has been working on being in the moment when performing so she can put as much emotion into each note as possible.

She hopes the hours of practice and her work will help her let go when she steps on the Town Hall stage with the combined orchestra.

"I’m super happy when I’m on stage. After the performance I’m all excited and hyped up."

While this will be a big moment, she is prepared for the nerves.

"When I get on stage I don’t need to think of anything else. If I’ve worked hard and practised a lot there will be nothing to worry about."

Keenan, who moved to Dunedin with his family about five years ago from Auckland, was "shocked and stoked" to make the finals.

He has been playing the cello since he was young but has recently been dedicating more time to do it under the tuition of Dr Heleen Du Plessis. As a result, he was enjoying it more, he says.

Keenan also aimed to make practice a priority so he could go out and enjoy the town hall concert.

"It’s on a completely different scale. It’ll be such a special experience."

He expects there to be some challenges in learning to co-ordinate with the orchestra but was confident he could deal with it.

Berry, who did not take up the piano until he was about 15 years old, even though his mother was a piano teacher, sees the experience as a chance to share music people might not know.

He finally took up the piano when he realised how unmatched it was in its ability to convey music.

"There were several things I really needed to play like Chopin."

Berry (20) is in his final year of study in piano and composition at the University of Otago.

He enjoys composition as it is a means of self-expression, a tool of communicating "like writing or painting". But it is this performance he is looking forward to before he knuckles down to prepare for his end-of-year recital and composition portfolio.

"This piece is energetic and exciting to perform."

"It’s a great opportunity for them."

The competition was first proposed by Hodgson Towers Family Trust and with the help of a group of supporters was finally established this year with the aim of providing young Otago and Southland musicians the encouragement and opportunity to extend their repertoire.

"A chance to play with a professional orchestra is also a big incentive. They don’t normally learn to play a concerto."

Each of the musicians has chosen good pieces that people would enjoy hearing performed, he says.

The organisers were surprised but delighted at the response they got and from a wide range of classical musicians, with about a third playing the piano, a third on string instruments and a third on wind or brass.

"It’s very promising I think for music in the region."

To be successful in classical music it required hours of dedicated practice so it is encouraging to see young people dedicated and committed, he says.

Once the concert was over, the competition would be reviewed and a decision made on its future.

Drummond says it could be held every two years if there was support for it.

"If the community shows it is behind it then there will be strong incentive for it to continue."