There may be some things that don't impress Shania Twain much but one thing is for sure - her fans certainly were left impressed by the final show of her Now Tour at Forsyth Barr Stadium.

With barely an empty seat in the house, the Canadian queen of country pop took the audience through a collection of her best-known hits and some of her most recent tracks, which will surely go on to become classics in their own right.

High-fiving the crowd from the stands as she entered to the beats of the Queen classic We Will Rock You, Twain jumped on stage with a beaming smile and a sparkling dress to the delight of her adoring fans.

The 53-year-old quickly transitioned into a crowd favourite in Come On Over, from her classic album of the same name, setting up a night of fun and entertainment.

Despite accusations of lip syncing in her Auckland shows earlier in the week, the crowd took her to their heart with plenty of dancing, screaming and cheering throughout the night.

Twain was quick to open up about her love for New Zealand, declaring it was her ''second home'', as well as
her love for the country's people, from whom she said she took heart when travelling the world. 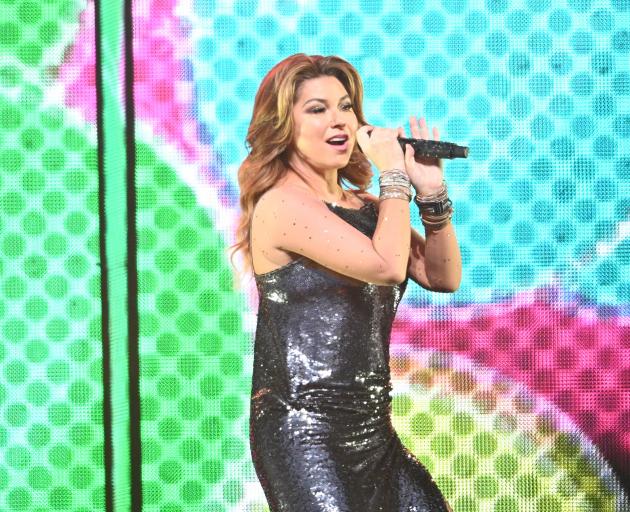 ''I don't know what I was waiting for, but all I can say is thank you for your outstanding welcome to your country.''

Her fans didn't have to wait long to get to hear one of her most well-known songs, That Don't Impress Me Much, which had the crowd singing along note for note as Twain was joined by energetic back-up dancers, who seamlessly interacted with video cubes and loads of leopard-skin print on stage.

Other classic hits taking fans on a nostalgic journey included Whose Bed Have Your Boots Been Under?, Honey I'm Home and Any Man of Mine before the packed stadium was back in sing-along mode as Twain belted out her well-known ballad You're Still The One.

The crowd continued to be in raptures throughout the night, taking part in kiss cams and dancing out into the aisles as dancing and bright lights helped pump up the energy on stage.

Three lucky fans were brought up on stage to take a selfie with the singer, who even took the time to answer the phone of one of her lucky guests, much to the delight of the audience.

And just when things seemed to be slowing down, some of her biggest hits followed as the show reached a crescendo, including From This Moment On, I'm Gonna Getcha Good! and (If You're Not in It for Love) I'm Outta Here!

But perhaps the biggest moment of the night and by far the biggest cheer was saved for her signature song Man! I Feel Like a Woman! which had every fan on their feet singing and dancing and showing nobody wanted to go home.

Twain then left the stage to a standing ovation and a large bouquet of flowers, thanking the crowd for their support.

Whether or not she tours again, one thing is for certain and that is Twain remains the undisputed queen of country pop.