The search goes on in songs 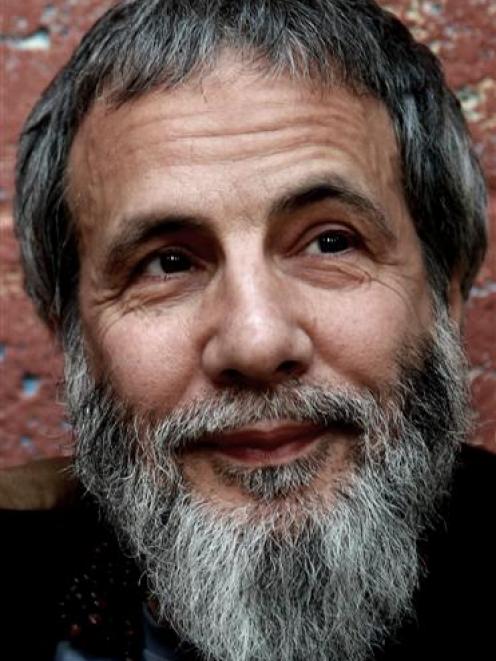 Yusuf Islam (formerly Cat Stevens).
Cat Stevens, one of the superstars of the sensitive singer-songwriter movement, experienced a spiritual epiphany three decades ago that led him to turn his back on rock'n'roll and embark on one of the most radical personal reinventions in recent pop music history.

He re-emerged as a devout Muslim who called himself Yusuf Islam and went a couple of decades without touching a guitar.

In recent years, the creator of such deeply felt pop hits as Peace Train and Oh Very Young has been finding his way back into the wild world he left behind.

These days, he has a new vision and understanding of his place in that arena, though his voice and his musical philosophy remain very much the same.

The songs on his new album, Roadsinger, which he is releasing under the name Yusuf, are as spiritually attuned as old Cat Stevens songs: remember I Think I See the Light, On the Road to Find Out, Miles From Nowhere, Home in the Sky and But I Might Die Tonight.

Anyone listening closely back then might have anticipated that the musician's inner quest would lead to some kind of transformation.

"I left a lot of clues, but I didn't make them totally obvious," Yusuf (61) says in his backstage dressing room on a recent visit to Hollywood.

"There are subtleties to life, and not everybody picks up the subtleties."

Many fans were confused by his decision to give up music; some were outright angry.

"I'm still not sure that everybody gets it," he says.

A working-class accent born of his upbringing in London's East End as the son of a Greek restaurateur contrasts with the ever-so-genteel singing voice that's still reassuring, although it's grown a bit deeper, a bit duskier.

His return to music-making has unfolded in accordance with his ongoing study of the Koran.

Initially, he was unsure what role music played for Muslims, so he simply gave it up.

But as his understanding grew, he discovered that an early form of guitar existed in the Islamic world.

Several years ago, his son brought home a guitar, and Yusuf heard the call of an old friend.

"My fingers remembered what to do," he says.

"Having that rest which was . . . 17 years? I don't know how many years it was that I put away the guitar - it enabled me to get back to my pure music-loving space.

"I would just write a song because I wanted to, because it pleased me.

"I wasn't doing it for business, or for a manager."

Business always has been something of a necessary evil for Yusuf, as it was for Cat Stevens, who was born Steven Demetre Georgiou.

His first taste of pop stardom came in the late '60s, when as a teen he wrote and recorded a UK pop hit, I Love My Dog, as well as what is perhaps his most-recorded song, The First Cut Is the Deepest.

But soon after, he contracted tuberculosis, and the illness landed him an extended stay in a sanitorium.

That time in a darkened hospital room fed his search for what he calls "another kind of light", and sent him on explorations of Buddhism, Zen, Taoism and other spiritual teachings.

He emerged with new thoughts, and new songs, which first flowered in 1970's Mona Bone Jakon and fully blossomed in his 1971 breakthrough, Tea for the Tillerman.

Many of the songs from those collections were used by director Hal Ashby for his 1971 film Harold and Maude, which became a favourite on the midnight movie circuit and helped Stevens' music reach a broader audience.

More releases followed. On Teaser and the Firecat, the follow-up to Tea for the Tillerman, he transformed an age-old hymn into a pop hit with Morning Has Broken; he then spent three weeks atop the US national sales chart with Catch Bull at Four, his only collection to reach No 1.

As the decade went on, though, Stevens' pop following began to wane, with his 1978 album Back to Earth peaking at No 33.

During that period, while swimming off the coast of Malibu, Stevens got caught in a rip that made him fear for his life.

He offered up a fervent prayer, vowing to better serve God should he survive.

A wave came seemingly out of nowhere and helped him reach the safety of shore; after that, he says, he discovered a new life direction, one that didn't involve recording studios, concert tours or radio station promotions.

"I think it was my birthday, and my brother decided to buy me a copy of the Koran.

"He knew of my ardent search for big answers, and he had realised that here was a religion that very few of us in the West had taken the time to study," Yusuf says.

"It's all been coloured by our prejudice, connected to the history of wars in Christendom.

"But really the religion is quite hidden.

"I personally was surprised when I discovered how well it fit in with my dreams.

"It was," he says, pausing briefly, "kind of miraculous."

The profundity of his awakening wasn't something he felt compelled to try to translate immediately into song.

So he stopped singing.

Instead, he directed his attention to starting the first Muslim school in London, which he still supports.

He met and married a Muslim woman and worked with her in raising a family that grew to include five children.

He unexpectedly became a flashpoint for Muslim-Christian tensions 20 years ago after Iran's Ayatollah Ruhollah Khomeini decreed that author Salman Rushdie should be put to death for his 1988 book The Satanic Verses, which many Muslims considered blasphemous.

Asked for his position, Yusuf never said Rushdie ought to die but pointed out that the Koran does say that anyone who defames the prophet is subject to death.

"The whole stigma of the Rushdie issue was something people tried to attach to me," he says in a tone as close to impatience as would come up during the interview.

"It was extremely unfortunate and still carries immense distortion in the way the whole issue was dealt with.

"If we're talking about the issue of freedom of speech, that really is a very large subject," he says.

A few years ago, Yusuf began tiptoeing back toward the legacy he'd left behind, recording new versions of some of his old songs using just voice and percussion.

Veteran record producer Steve Buckingham started exploring whether he might be interested in making a whole album and invited him to Nashville to record.

That's when Yusuf's world turned inside out for a while.

After a transatlantic flight with his daughter to begin the sessions, Yusuf's plane was diverted to Maine, where Homeland Security agents detained him for hours because his name was similar to one on a federal "no-fly" list assembled following the September 11, 2001, terrorist attacks.

"They kept asking me to spell my name," he says.

"The worst thing was they kept me separated from my daughter."

Unsure whether he was the person on the list, Homeland Security sent him home.

"The musicians were actually waiting in the studio," Buckingham said in a separate interview.

"It was just unreal.""I take things gracefully and don't hold things against anyone," Yusuf says.

"The idea of being safe is completely understandable, but when you start to misunderstand what kind of person I am, then something's wrong."

Eventually, Yusuf recorded his first full-on pop album, An Other Cup, released in 2006.

He did only one concert in the US at the time, a private show for a small audience in New York.

He wrote a song about his being denied entrance into the country, Boots and Sand, giving the whole affair a lightly whimsical spin.

The recording, which will be offered as a bonus track on iTunes because Yusuf says "it didn't fit with the rest of the material for the new album", features guest vocals from Paul McCartney, Dolly Parton and Alison Krauss.

The title song on Roadsinger codifies his own story of a troubadour seeking enlightenment.

To Be What You Must explores what is necessary on that road, the phrase taken from 13th-century German theologian Meister Eckhart: "

To be what you must, you must give up what you are."