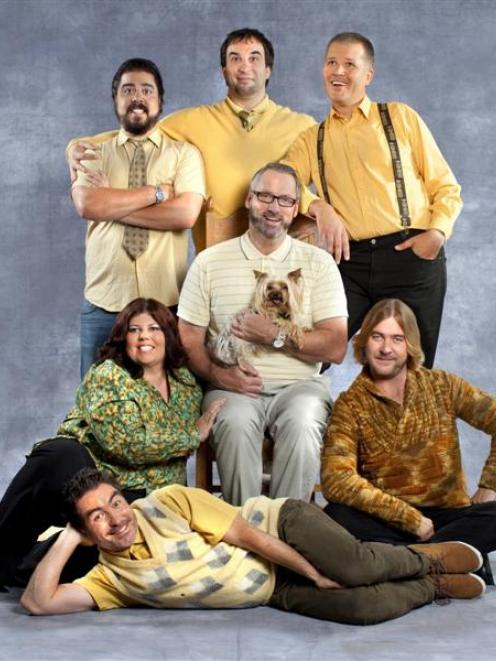 In a recent edition of topical TVchortle-fest 7 Days, one of those assembled made the mistake of suggesting it was a family show.

Paul Ego put him right. He swore at him.

It's not a family show and Ego's sons, the eldest of whom is 13, are not allowed to watch.

That's probably just as well, given another of the show's regulars, the irrepressible Dai Henwood, is in the habit of sharing his early sexual experiences - often apropos of not very much at all.

Highbrow it ain't. Funny it is. And it's a formula that appears to work, the show having racked up 100 irreverent episodes in its Friday-night slot.

The show's on the road now, and coming to Dunedin next week, for one night at the Regent Theatre.

Ego says it will be an opportunity to see the show as the live Thursday-night studio audience in Auckland does.

"The recording we do for TV is about three hours, so we normally start shooting at about 6.30pm and wrap up about 9.30-10pm. Then they take the tapes out of the truck and down to TV3 and start editing that night.

They do that in shifts with the producer, so by the time it goes to air on Friday night they have something the lawyer has signed off and everybody is happy with."

Dunedin, as elsewhere on the trip will get the standard 7 Days-live format, with the comedians doing short stand-up spots first, before splitting into teams for the competitive current-events section.

Often, Ego appears to excel in the latter but that might be the magic of television.

"I think I would be probably the most ignorant person on the show as far as news and current affairs go. My wife and I tape the news on TV and we might catch it every couple of weeks," he insists.

"There are those parts on 7 Days where [host] Jeremy [Corbett] will say something's happened and Dotcom has done this or John Key said this, because that's basically the only two stories we have in New Zealand. When I say, 'has he?', that is me genuinely saying that. I am not just acting surprised."

The show engages the assembled comedians in a series of quizzes, among them putting captions to unlikely images, thinking up questions for answers provided by Corbett, and trying to work out what recent news story is behind a child's drawing.

"Captions is always fun and I really enjoy answers. 'My kid could draw that' is really great. I just love the surprise of it because you never really know what the kids are going to say," he says.

"Sometimes when they are talking about a story in which the content, perhaps, is quite heavy, or quite disturbing, the tone in their voice, they sound so deflated like they have just had their innocence taken away. They shouldn't have to be describing something like that," he says, with a giggle.

Does he think the kids involved get to watch the show?

"I absolutely love it. It is the one solid job that I have every week. We all do different things, like live gigs and corporate work, voice work and stuff like that but it is 7 Days that I look forward to.

"As a comic it is just the best gig. The thing that I love more than doing comedy as a comedian is hanging out with other comedians talking s*** and this job is those two things combined."

7 Days is live at Dunedin's Regent Theatre on Friday, November 30.