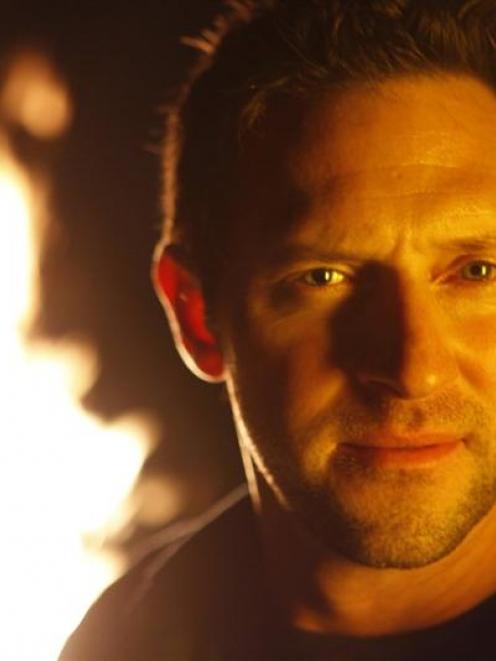 Surviving Disaster host Cade Courtley.
I was several floors up in a burning high-rise, trapped with hundreds of other panicked co-workers who couldn't find an easy escape.

The halls were filling with smoke, as were the stairwells, so I took the only obvious way out.

I stepped into a lift - and plummeted to a fiery, premature death.

Or so it was meant to seem.

In truth, I was just acting.

I was an extra on the set of an elaborate pyrotechnic simulation that makes up the escape-from-fire episode of Surviving Disaster.

The latest high-octane "infotainment" programme, Surviving Disaster is half reality TV, half scripted narrative - a programme that takes advantage of high anxiety and enthusiasm for preparedness while striving to live up to its name.

The programme originally was titled Surviving Terrorism, but that al Qaeda-esque idea was dumped in favour of a show that was broad enough to encapsulate different types of disasters.

So in addition to an episode that shows viewers how to survive a dirty bomb, they'll get action-packed tutorials in how to live through hurricanes, earthquakes, aeroplane hijackings, avalanches - and fires.

Produced by Britain-based company Wall to Wall (which won an Oscar earlier this year for its documentary Man on Wire), the show is designed to "look a little bit like a CNN reporter who's embedded in Baghdad with the war going on around him", Wall to Wall chief executive Alex Graham said.

But instead of a CNN reporter, we get Cade Courtley - a charismatic former Navy Seal with Paul Newman eyes and clubs for biceps.

Courtley (39) was selected after sending an audition tape from Baghdad, during which he videotaped himself driving a Humvee with improvised explosive devices going off around him.

Courtley's job is to present information, which he does with masculine, yet actorly, aplomb.

Scruffily chic, with a one-day shadow and mousse-mussed hair, he is convincing in his hero role.

He delivers his lines as if actually in the line of fire, and he leads his supporting actors as if charged with their care.

Intercut with dramatic simulations of derring-do, there's real footage of real disasters and the real people who've survived them, apparently in an effort to put more "real" in this entirely scripted reality show designed to blur the lines between entertainment and useful information.

"The best television, you don't have to choose between entertainment and information. The best kind of television can do both," Graham said.

In my time as an extra, Graham's point was well taken.

I was enormously entertained by Courtley, who tends to end his messed-up takes with deadpan tailspins into profanity, and I also learned a lot.

For instance, I will never, ever step into a lift when a building is on fire.

And I will never, ever again attempt to act.