Serious side to being sexy 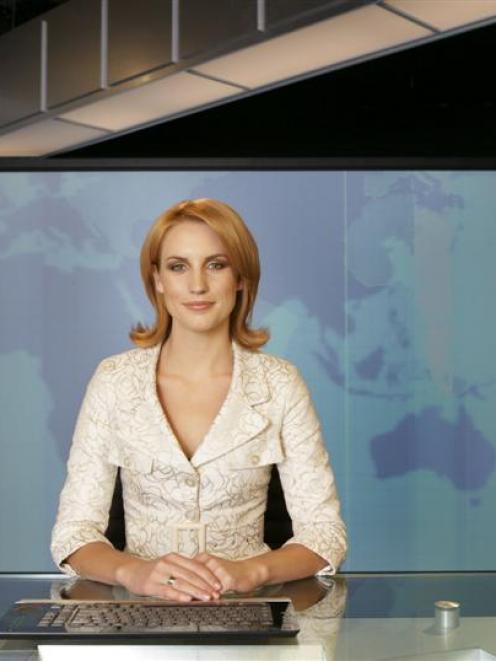 Samantha Hayes at work for TV3. Photo supplied.
Earlier this month Metro magazine named a young woman from Milton as Auckland's sexiest woman. Sam Hayes (24) left Milton eight years ago to pursue a media career that has so far taken her to the presenting chair of TV3's Nightline programme. Mark Price finds out if sex appeal and serious journalism go together.

Q What did you think when you were named Auckland's sexiest woman?

A I was quite surprised. It's certainly not a label that I would think appropriate for myself, really.

But, it's a really cool thing. It's really nice and gives you a bit of a confidence boost.

I must say it makes up for the time when I was about 9 or 10 when I entered the Gabriel's Gully beauty pageant and I didn't place at all!

Q Is it a good thing or a bad thing?

A My producer said to me it can only mean good things for Nightline. So that's good.

But does it come with expectations? Do I have to wear high heels all the time? Are people going to expect plunging necklines?

I hope not because that's not really my style.

Q Did you know who Audrey Hepburn was?

A Oh, yes of course. I was flattered by that. I think Audrey Hepburn is one of the most beautiful people ever to have graced the big screen. She was an absolute delight.

Q Who do you think might be Auckland's sexiest woman?

A I thought Nicky Watson would have been up there because she seems to be the style of woman that you see all over the place in Auckland.

I would have said the gorgeous Claire Robbie, who was our reporter at Nightline for the last year and a bit, but she's recently moved to Los Angeles.

But I haven't been going around scoping the women out, to be honest.

Q What reaction did you get from down home?

A I got lots of very hilarious texts from friends. A lot of humour around "girl from the sticks makes it in the big smoke" kind of attitude, but certainly Mum and Dad were very excited to hear, and some old school friends who are down that way still.

Q What did your boyfriend say?

A Arthur, (actor Arthur Meek) just thinks it's funny. Has he made any comments? I don't think he has apart from "is Auckland's sexiest woman going to make me a cup of tea?"

Q Do you ever encounter people who are jealous of your success?

I just can't imagine why this other woman seems to really have a thing against me. I mean you've just got to not take that stuff too seriously, but I wouldn't be surprised if there was a little bit of jealousy there.

Q Do you get people saying you are successful just because you are good looking?

A I'm not naive about it. I know that if you present well you can get ahead a bit easier in life, so I probably do spend far too much time on clothes and spend far too long getting ready before I go out but I think that is important.

Presentation is always going to be a really important thing.

Q Do you think you could be seen as the lightweight up against a more serious journalist like Greg Boyd on TV One's Tonight show?

A I don't just turn up in front of the camera and read what comes out of the autocue. I have a great deal of input into what is written throughout the night.

I am quite ambitious about what I want to do but I keep doing stories and analytical stuff. I've just tried to increase those skills.

I think that Greg is definitely branded in that way (as a serious journalist) but how often does he actually do stories? I'm not sure.

I mean he's really just as much a front person as I am. He's just a male version with sideburns and a deep voice.

Q So do you have your sights set on a six o'clock news presenting job?

A Of course. It's definitely something I want to do and am capable of doing. I could step up today and read the six o'clock news if they wanted me to.

But, in terms of being the Hilary Barry or the Carol Hirschfeld, I'm just too young and I need more experience in journalism and television, and maybe in life.

Q Was there ever a moment when you contemplated spending your life in Milton?

A I don't think so. My mum and dad always said to us - there are three of us, an older brother and a younger sister - they always said to us you can do anything that you put your mind to and that's something they repeated and reiterated and just reminded us of as we were growing up.

So, I was going to be an astronaut and a hairdresser, and an air hostess and a scientist and maybe a geologist and an archaeologist . . . I don't think there was ever any room for me to stay in Milton.

Q Where does all that confidence come from?

A I don't know if I have a great deal of confidence. But I think what it boils down to is that I'm a perfectionist and I don't like not doing things properly.

I think if you are going to do something you need to do it to the best standard you can achieve and while I might not have a great deal of confidence I kind of push myself to try and do whatever that thing is as best as I can.

And that's how I started on Nightline as well. I was absolutely petrified. I was just shaking in my chair.

It was just one of those challenges that I had to step up and do.

Q Being so young, and from out of town, did you step on any toes?

A Not that I know of, specifically, but I imagine there might have been people that really wanted the job.

I was a nobody from nowhere coming up to Auckland and it was scary.

I was definitely intimidated and I had to have this new look and have my hair cut off and wear these clothes that I wasn't used to wearing.

I just thank my lucky stars I spent five years doing live radio because otherwise I don't think I would have been able to open my mouth when they said "cue".

Note: Ms Hayes' answers have been edited for length.