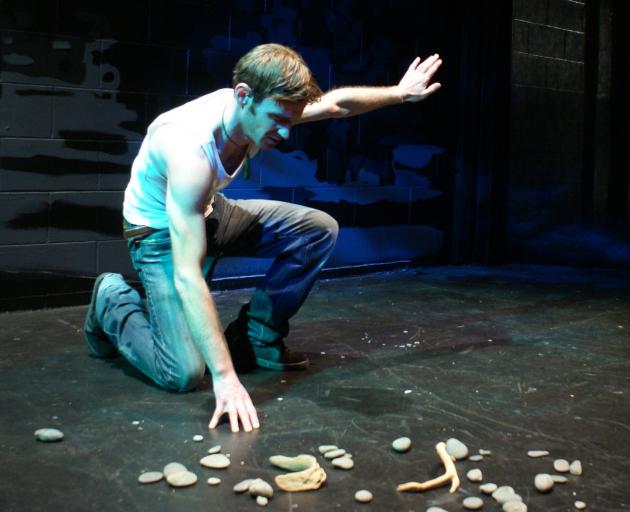 Cheyne Jenkinson rehearses for The Raft at Dunedin’s Globe Theatre. PHOTO: SOFIE WELVAERT
Aspects of the Globe’s latest production might seem eerily familiar to those who found being closeted with family during the Covid-19 lockdown forced some unresolved issues to the surface. Rebecca Fox talks to those involved in The Raft.

A weekend away to a bach on the West Coast with family. The weather packs in, meaning no-one can go anywhere.

For The Raft director Sofie Welvaert, this scenario is one many New Zealanders can relate to. The pouring rain and the feeling of the world pressing in on you.

"It’s a holiday story. How many of us have had that holiday in a ramshackle crib or caravan where everyone is crammed into a small space and the weather packs in, then the niggles start.

"I have childhood memories like that being stuck in a tent with my sister."

It is one of the reasons New Zealand playwright Carl Nixon’s play The Raft appealed to her.

"The play centres around one man’s struggle to deal with grief and loss and the impact that has on the wider family as well as the breakdown of his relationship with his father whom he blames for the tragedy.

Welveart has been involved with many aspects of various Globe plays and last year directed Wryd Sisters, through which she discovered she really enjoyed directing.

"It appeals to the control freak in me. I can have a hand in how the whole piece comes together not just the acting or the costumes."

The Raft has a small cast compared with her last production, and is more concentrated on each character and how they interact.

"The relationship between Mark and his father and what it means to be a father — they are characters very neatly written. There are lot more nuances and each actor gets a good amount of time on stage."

The challenge is in the detail with the actors having to use body language and tone of voice to convey emotion as well as spoken word, Welveart says.

"There is a lot of anger and hate. He’s never been able to move on and then his wife forces this weekend away as a distraction he thinks."

It is a "weighty" role he is enjoying getting his teeth into.

"It’s close to home with everything that is going on ... with isolation a lot of people had to confront things they normally wouldn’t."

Mark is a 38-year-old very analytical character. He is into computer science and is not the sporty type his father wished for.

"His dad builds and fixes things whereas I [Mark] would hire someone to do that. There is a lot to flesh out. Moments where he battles with his inner deamons which manifests itself into a monster that lives in the lake."

Jenkinson, who won an Outstanding Theatre Award for multiple roles in multiple productions, in the Dunedin Theatre Awards last year, first saw the play during its premiere season at the Court Theatre in Christchurch in 2007 while he was at drama school.

"It’s really nice to try and fill the boots, give it a spin myself."

Welveart says given the disruption to the theatre’s schedule this year due to Covid-19, they were lucky to be able to put on the show, even if it was just for two nights.

The extra time that delays had given them meant they had been able to put more time and effort into the work both on stage and backstage using clever lighting design, sound and a mural to create the lakefront vista the play is set in.

"We’re using a bit of theatre magic. The simplicity of the play allows us to do that. The mural gives great depth and brings the West Coast in its dripping beauty to life and with the lighting the lake is like its own character."