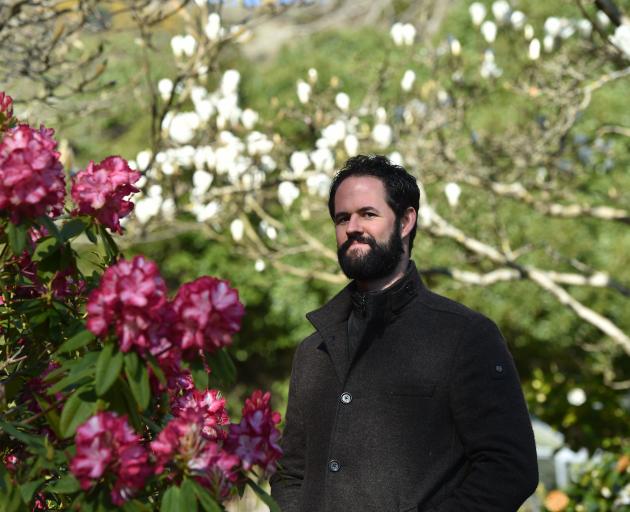 Tenor Stephen Chambers, lured back to New Zealand from Germany by the idea of performing to an audience free of Covid-19 restrictions, had his hopes dashed as the country went into lockdown just as he was to do his first performance.

At first he did not understand the importance of the news a Covid community case had been discovered in Auckland, as in Germany lockdowns have been regional and not as strict, so he was shocked to find the whole country going into lockdown and the reason for his visit, to appear in Opera Otago’s production of Die Fledermaus, postponed along with the cancellation of the Marama Hall concert he was to perform that day and an Olveston concert he was about to do.

‘‘I’m lucky to have a chance to come home and see my parents but it’s a shame to miss out on the possibility of doing a live show again for an audience without a mask — that is starting to happen on the other side of the world now, weirdly enough.’’ 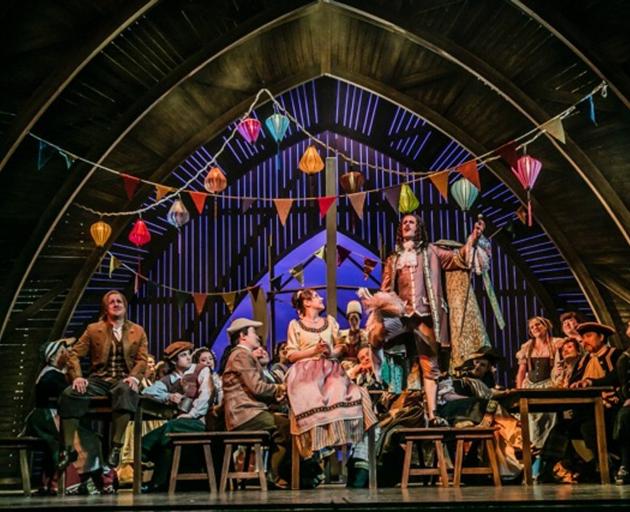 He had not made the decision to come home lightly — he left his two children, aged 3 and 5, and his wife, Natalie, behind and also had the cost in money and time for a two-week stay in MIQ, unnervingly in the same hotel it was discovered the Delta outbreak originated from.

‘‘It is disappointing and just frustrating after doing the two weeks in MIQ and making such a difficult decision, but it was a rare chance for me to come home.’’

It was three years since he had been home and the idea of performing to a live audience again was very attractive. It just so happened Opera Otago’s production of Die Fledermaus corresponded with a break in his performance schedule at the Landestheater Detmold, Germany. 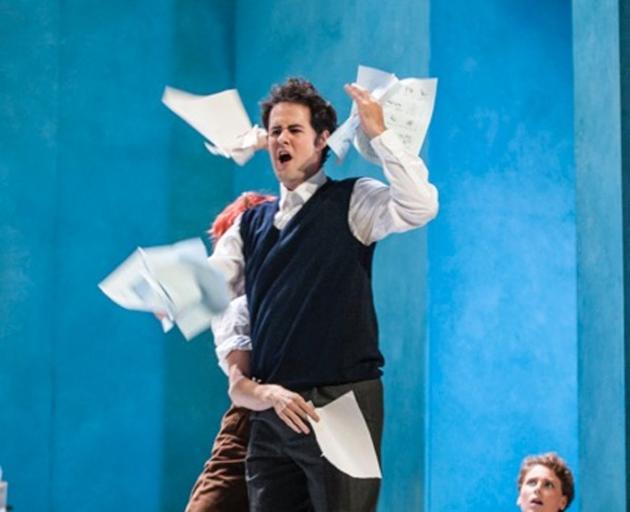 Performing David in Die Meistersinger at the Landestheater Detmold.
‘‘I’d done the role of Alfred, obviously in German, but I thought I could learn it in English. It’s a fun role, a great piece. It is a crazy, funny story with great music, a lot of fun.’’

His offer to Opera Otago to come home to play the role was accepted so he made arrangements to come home.

He arrived home in time to begin rehearsals and was enjoying the experience without the Covid restrictions they faced in Germany.

‘‘If you were singing you had to be 3m apart, if you touched a prop you had to touch it in a specific place for you, there was no kissing; it was very sterile and frustrating.

‘‘Coming to work as normal here was a big draw.’’

However, it was not to be, although the silver lining is being able to spend more time with his parents and help them out with the heavy lifting in their garden. 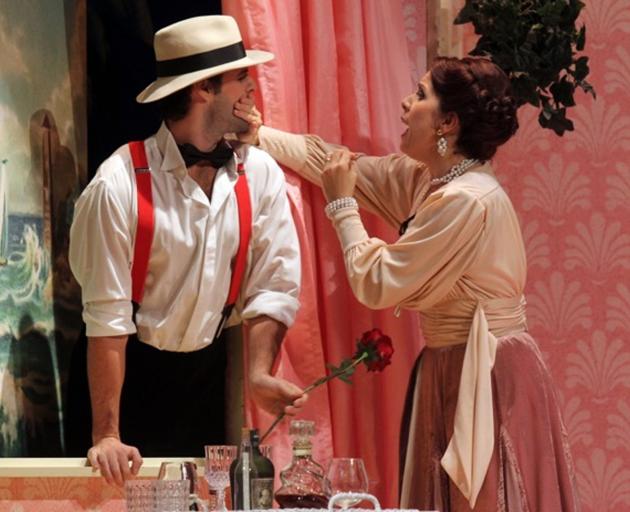 Stephen Chambers plays Alfred in Die Fledermaus in Detmold with Eva Bernard. It is the role he was to have played here. PHOTOS: SUPPLIED
‘‘I’m making the most of it. There is loads to do in my parents’ garden and I’m happy to help them as much as I can.’’

It also meant he could go back to Germany early and help his wife, who although she had her parents visit for a month from France to help with the children, was now juggling childcare with starting training as a kindergarten teacher.

Chambers has been living in the small town of Detmold for five years after getting an ensemble role at the Landestheater (founded in 1825). He moved from Berlin where he had lived for two years while working at the Berlin Staatsoper.

‘‘In Berlin you could get by speaking English but when I moved to the smaller town I had to learn to speak German — I had a lot to learn. I got good at faking understanding. I found the best way was to ask the director to show me what he meant.’’

It has also meant his children are becoming bilingual. During lockdowns they erred on the side of caution and kept their children home from kindergarten so they were exposed to more English as that is what Chambers and his wife speak to each other. 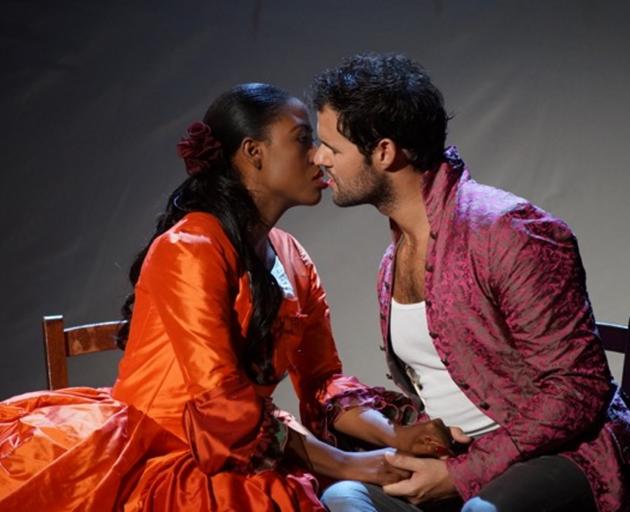 Performing as Ferrando in Cosi fan Tutte in Bregenz with Kelebogile Besong.
‘‘They learnt a lot more English and now with me being away they have been speaking French a lot with my in-laws being there.’’

They also learn and speak German at school.

The family bought a house there just before Covid (or Corona as they call it in Germany) hit which has been great as gave them outdoor space to play in during lockdown.

His job has given him some great opportunities, not just performing at Landestheater but also guest appearances at other opera houses around Europe — including short-notice appearances such as performing Lyonel in Martha in Gratz.

He was looking forward to his debut as Sou Chong in Lehar’s Das Land des Lächelns this year but that performance was put off due to Covid. Other memorable performances include as Belmonte in Mozart's Entführung in Dusseldorf and as Ferrando in Così fan tutte at the Bregenz Festival in Austria.

‘‘We had rehearsed the show and it’s ready to go — it’s so frustrating to do all the work for nothing.’’

Chambers credits his early training at the University of Otago for setting him up for these roles.

He decided to study music after getting involved in his school’s choir at Kavanagh College and then being selected for the New Zealand Youth Choir.

‘‘I never really considered it as a career option.’’

Inspiration came from other University of Otago-trained singers such as Anna Leese and his mother’s cousin, soprano Marie McLaughlin, who he got to see perform in New Zealand and at Glyndebourne, an opera house in East Sussex in England.

Once he completed his music degree at Otago he headed to the United States to study at The Boston Conservatory.

Chambers then came back to Dunedin to sing in competitions. He won New Zealand's oldest singing prize, the ODT Aria, in 2005.

He was awarded the 2009 Royal Scottish Academy of Music and Drama international scholarship where he gained his master’s degree in opera and afterwards was a resident artist there.

‘‘It was an amazing opportunity.’’

It was also at Glyndebourne, where he met his wife to be who was working in the wig department, and sang with Dame Kiri Te Kanawa. Dame Kiri advised him to do some more study so he went to Wales where he studied with Dennis O’Neill part-time for six months.

‘‘The Sole Mio boys were studying there at the same time.’’

He then gained a place at the Berlin Opera Studio.

While he is lucky to have a job, he admits there is some uncertainty in the industry around the impact of Covid and the lockdowns on audiences’ willingness to come out for live shows.

‘‘Things change — a lot has gone online and people aren’t as interested in live performances. But there is definitely a place for it. Nothing is more exciting than a live performance and orchestra.’’

His last ‘‘normal’’ live performance was on Halloween last year which sold out but another showing June this year with Covid restrictions was not as popular.

Yet it is not all doom and gloom as in England now that restrictions have eased there appears to be a hunger for live and cultural performances again, he says.

‘‘I’m looking forward to it bouncing back in Germany too.’’

"Opera Otago covered Stephen Chambers' financial cost of both the travel and MIQ through the contribution of a generous private donor. Opera Otago is disappointed that they have had to postpone Die Fledermaus and look forward to rescheduling in 2022." 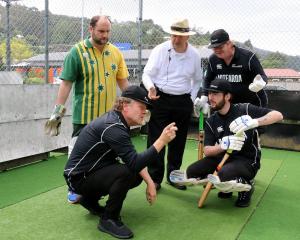 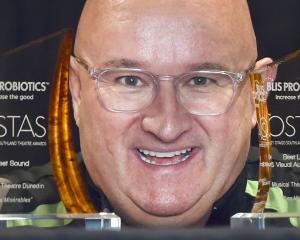