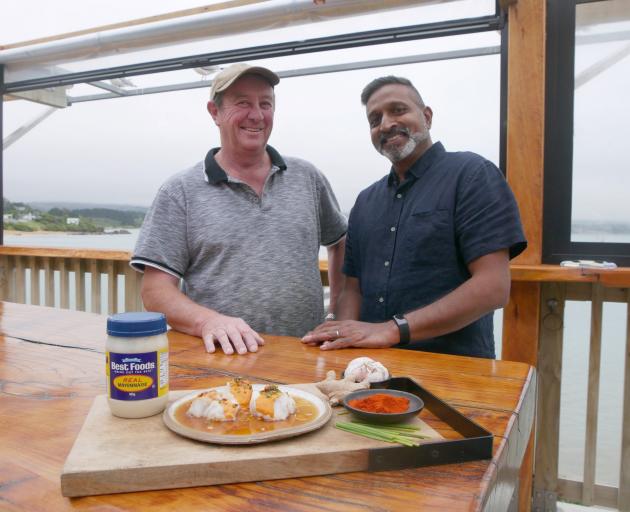 The FishWife co-owner John Pile, of Moeraki, and TV chef Ganesh Raj enjoy a meal. PHOTO: RUBY HEYWARD
New Zealanders have everything they need in their own backyard.

At least, that is what television chef Ganesh Raj has taken from his Best Foods Foodie Roadie tour around New Zealand.

Yesterday, Mr Raj stopped off at The FishWife in Moeraki, 40km south of Oamaru, to cook up some fresh blue cod with the seaside restaurant’s co-owner John Pile.

The purpose of the tour was to highlight local producers and their unique goods.

"New Zealand is filled with extraordinary food manufacturers across the country, but a lot of us forget about where our food comes from," Mr Raj said.

Mr Raj believed if the country was shut off from the rest of the world, it had everything it needed in terms of food — including produce coveted globally.

Moeraki was just one stop out of six, as Mr Raj visited the country’s best "hidden gems" to try the best fresh produce on offer — from mussels, avocado, mushrooms and cheese to pork.

Thanks to its fresh blue cod and crayfish, The FishWife made the list.

The restaurant was opened by Mr Pile and his wife, Nicky, almost three years ago, and had established regulars who travelled from across the South Island.

To highlight each region and its produce, Mr Raj developed corresponding unique and "accessible" recipes that could be recreated at home.

The tour would be documented on social media.