How to make potato latkes

Flavours of home is a series of recipes from around the world cooked by people at home in Otago. This week Emily Flynn, from the US, shows us how to make potato latkes to celebrate Chanukah, the Jewish festival of lights, which this year is from December 2 to 9. 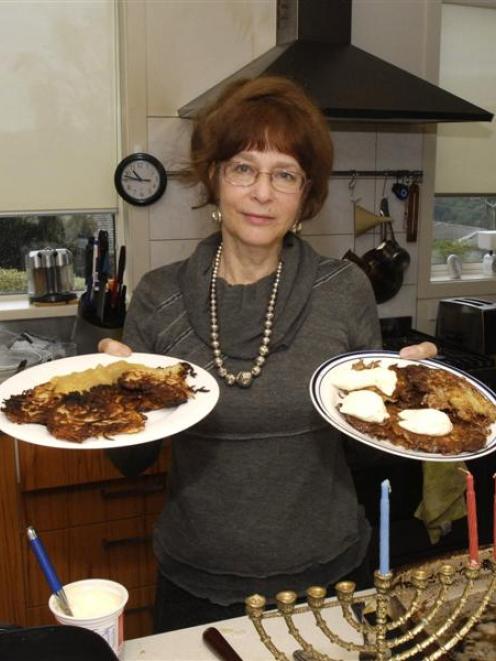 Emily Flynn shows her potato latkes. Photo by Gregor Richarson.
Emily Flynn was raised in Washington DC. Her grandparents had emigrated from Germany and Poland when they were about 13, fleeing the Russian pogroms. Villages would band together to send their young people away together to save them and neither of her grandparents ever saw their parents again, she says.

Her grandfather was religious and many of his children kept kosher (Jewish dietary laws) in honour of him. Her mother was an acclaimed cook, and the young Emily and her sister watched her cooking traditional food. However, she says they never managed to get what they made to taste as good as their mother's.

The young Emily grew up in a politically aware family (her father was a member of the Communist Party). As a teenager she joined the picket at Glen Echo amusement park, which was segregated at the time, and met her future husband, Prof Jim Flynn, who was also picketing. They married soon after and came to New Zealand in the late 1960s, believing there would be more political freedom here.

Chanukah (often written Hanukkah) is a joyful, eight-day Jewish festival celebrating a miracle when the Macabees rededicated the temple in Jerusalem that had been desecrated in 165BC.

The story goes that there was only one day's supply of consecrated olive oil to fuel the ever-burning lamp but this miraculously lasted eight days until new consecrated oil could be brought to the temple.

As well as lighting the Chanukah candles in a traditional nine-branched candlestick, it is traditional to eat lots of oily food at Chanukah, and potato latkes were a favourite in her family, Mrs Flynn says.

One of the Jewish dietary laws is the prohibition of eating milk products and meat products at the same meal. They must not even be cooked using the same utensils, and a certain amount of time must elapse between eating dairy and meat meals.

Many items, including eggs (unless they have a drop of blood), fish, and fruit and vegetables are considered "parv" - neither milk nor meat products, and so can be eaten with either.

Mrs Flynn, who does not observe kosher prohibitions, says they are tastiest cooked with butter. She uses peanut oil as well so they don't burn.

Peel and grate the potatoes. Put them in a colander or sieve over a bowl, cover with plastic and leave to drain for half to one hour. Squeeze to get the last of the water out- there will be a surprising amount.

Chop the onion finely. Add the eggs, flour and seasoning, and mix together well.

Heat oil and either butter or chicken fat in a frying pan. There should be enough to come halfway up the latkes.

When hot (the butter or fat will have stopped spitting), put large spoonfuls of the potato mixture into the oil and press down to flatten.

Turn them over as they brown.

When cooked and browned on both sides, serve immediately with apple sauce, or, if cooked in butter and therefore part of a dairy meal, they are delicious served with sour cream.

• When Mrs Flynn boils a chicken to make chicken soup, she skims the fat off and freezes it. It's delicious mashed with cooked chicken liver and onion, she says.

• Originally, latkes would have been made with matzo meal (crushed unleavened bread or biscuits) instead of flour.

• Mrs Flynn uses Nadine potatoes, which make the latkes crisp on the outside and soft in the middle.

• It was time-consuming to grate potatoes by hand so when she was a child latkes were only made on special occasions. These days it's easy to grate them with a food processor.

• Draining the grated potato well makes the difference between crisp and mushy latkes.

• The same mixture (using self-raising instead of plain flour and about 50g of butter) can be cooked in a greased baking dish in the oven to make potato kugel.

• Mrs Flynn says some people refrigerate and reheat latkes in the oven but they are only a faint shadow of freshly fried latkes.