How to bake salmon with lemon and herbs

Flavours of home is a series of recipes from around the world cooked by people at home in Otago. This week Barbara Larson from Canada shows us how to bake salmon with lemon and herbs.

Barbara Larson grew up in British Columbia (BC), Canada, but was travelling round New Zealand in 1972 with her partner and 5-year-old daughter. 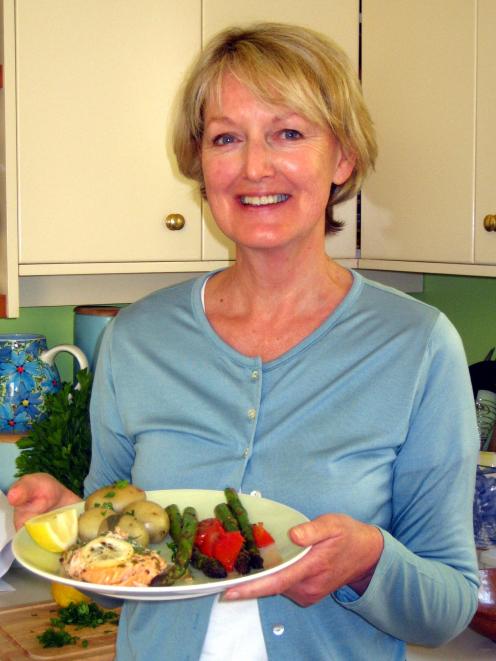 Barbara Larson with Lemon and herb baked salmon. Photo: ODT files
They liked Dunedin and within three days they had bought a house, she had found a job, and her partner had signed up for law school. Now she is a publisher and founder of Longacre Press in Dunedin.

When asked to cook something Canadian, all she could think of was maple syrup, she said, so she phoned her mother who told her a girl from BC couldn't go past salmon.

Several varieties of salmon spawn in British Columbian rivers, and wild salmon is preferred to farmed salmon there, she says.

This dish is lovely served cold, and can be used as a sandwich spread or cracker topping. As often happens, the herb flavours intensify and permeate the chilled fish. Just the thing for a relaxed festive season or summer dining.

Preheat the oven to 200degC.

To bone the salmon fillet, run your finger up the centre and use a pair of tweezers to pull them out against the grain.

Rub a little oil into both sides of the salmon and lay it skin side down on the baking paper.

Peel and crush the garlic and spread over the salmon.

Chop the herbs finely and spread over the salmon.

Slice the lemon thinly, and remove any pips. Lay the slices on top.

Pour the juice of half a lemon over the fish, grind over pepper, and wrap up the parcel layer by layer.

Place on a baking tray and bake in the middle of a hot oven for about 20 minutes.

To check if the salmon is done, take it from the oven, unwrap gently and pierce the flesh with the point of a sharp knife. The juice will run white when it is done.

Remove from oven and allow to rest for five minutes before serving.

To serve, slice into portions and lift off the skin.

Serve with baked asparagus with tomato, and minted new potatoes sprinkled with finely chopped parsley and butter or margarine.

Wash asparagus and break off the tough ends of the stems. Dry on a paper towel.

Cut tomatoes in half, remove the core and cut each half into four or five segments.

Place asparagus and tomatoes in a baking dish, drizzle olive oil over, and toss so the vegetables are coated. Season with black pepper.

Bake at 200degC for 12 minutes or until the asparagus spears are just tender, stirring halfway through.

- Thanks to Afife Harris