Even as audio versions of best-sellers fill store shelves and new technology fuels the popularity of digitized books, the number of titles accessible to people who are blind or dyslexic is minuscule. 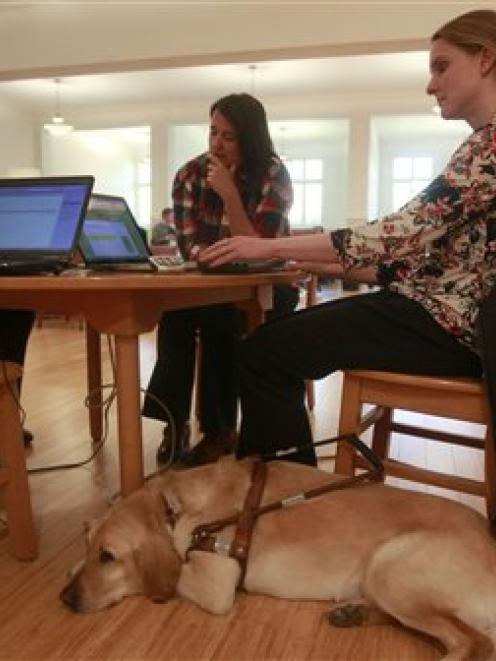 Jessie Lorenz (right) who is blind, sits with her dog Nacho as she works with engineer Mike McCabe, left, and director of Open Library George Oates at the Internet Archive office in San Francisco. Photo by AP.
A new service being announced this week by the nonprofit Internet Archive in San Francisco is trying to change that. The group has hired hundreds of people to scan thousands of books into its digital database - more than doubling the titles available to people who aren't able to read a hard copy.

He's hoping a subsequent book drive will add even more titles to the collection.

"We'll offer current novels, educational books, anything. If somebody then donates a book to the archive, we can digitize it and add it to the collection," he said.

The problems with many of the digitised books sold commercially is that they're expensive, they're often abridged, and they don't come in a format that is easily accessed by the visually impaired.

The collections are also limited to the most popular titles published within the past several years.

The Internet Archive is scanning a variety of books in many languages so they can be read by the software and devices blind people use to convert written pages into speech. The organization has 20 scanning centers in five countries, including one in the Library of Congress.

"Publishers mostly concentrate on their newest, profitable books. We are working to get all books online," Kahle said.

Marc Maurer, president of the National Federation of the Blind, says getting access to books has been a big challenge for blind people.

"Now, for the first time, we're going to have access to an enormous quantity," he said.

Maurer, who is blind, said that when he was in college, he hired people to read books to him because the Braille and audio libraries were so limited.

"That has been the way most students have gotten through school," he said. "This kind of initiative by the Internet Archive will change that for many people."

Only about 5 percent of published books are available in a digital form that's accessible to the visually impaired, Maurer said, and there are even fewer books produced in Braille.

Ben Foss, a San Francisco man with dyslexia, says having so many more books available is liberating. He compares it to a million more ramps being added throughout a city for a person who uses a wheelchair.

"For me, it's about access. They have provided flexibility and freedom to get books in a format that I use every day," said Foss, 36, who is the director of access technology in the digital health group at Intel Corp.

The digitised books scanned by the Internet Archive will be available for free to visually impaired people through the organisation's website. The organization does not run into copyright concerns because the law allows libraries to make books available to people with disabilities, Kahle said.

Jessie Lorenz, an associate director at the Independent Living Resource Centre San Francisco who has been blind since birth, said it has been hard to find controversial or edgy titles in a format she can use, and choices are often dictated by institutions or service groups who have selected certain books for scanning.

"For individuals living with print-related disabilities, this is groundbreaking," she said. "This project will enable people like me to choose what we read."