Extreme fitness challenge: Down and dirty with 'animal workout' 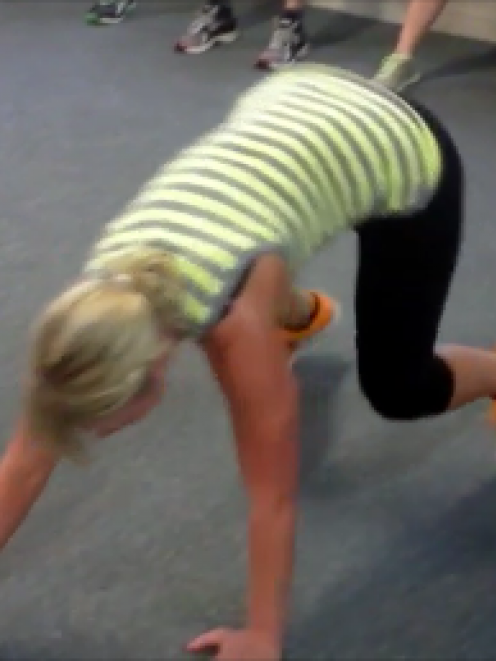 Me doing the "Bear Crawl"
Week 4 Day 10: Recently, a friend asked me what I think about on my drive to my workouts, like, do I feel anxious or wonder why the hell I'm up this early torturing myself. Here's what I think about...

I know the workout will be tough. It always is and I'm good with that, so I don't have to waste energy thinking about that part of it.

Funnily enough, I'm more concerned with getting there on time than anything else but as I scale up the three flights of stairs and see the same familiar sights and sounds like the posters on the walls (on the second flight of stairs there's a big poster with a girl donning a pair of boxing gloves advertising their TribePunch programme) the sound of people working out and the high tempo music I begin to feel excited but then of course that usually turns to apprehension when I see what's on the whiteboard.

Today was no exception.

I'm becoming "accustomed" (not sure if that's the right word to describe it) to these types of workouts and I'm really just keen to tuck in and get started.

Today, Julia was the only one to finish. I've been told that this season of Tribe is the hardest that anyone can remember (maybe it's because it's the end of the year so they want to really "let ya have it." I don't know.)

The girls told me that if I thought the weights were hard then the "animal" exercises were even worse.

I look across the room to the "whiteboard-of-death" and I see some interesting new exercises for today's workout.

Bear crawls, Alligator crawls, Inch worms and good old primal burpees which I've recently been introduced to (if you've ever done traditional burpees then you know how hard those are well primal burpees would be the bigger brother that everyone hates)

(below: here's me doing the bear crawl, looks kind of funny, but it's tough and hard to breathe properly in that body position.)

Time to get started!

We kicked off with our usual warm-up with push ups and sit ups that have been increased by another 5 reps. I'm still doing the girly push-ups for the most part.

Today's session is a bit hazy because I haven't been keeping up to date so this may not be totally accurate:

Today was as another hard workout and I had trouble doing the alligator crawls. You have to crawl like an alligator and then move into a press-up! UGH!!!

I'm pleased to say that I'm getting some results because I can see my little muscles poking through and I'm also feeling stronger.

My weight on the scales is the same weight. I lost 2 kilos halfway through week two and my weight has pretty much stayed the same since then. I've been told that I'm replacing fat with muscle so the scales reflect that.

Anyway, I'll catch you on the next session!

- Dunedin hairdresser Emma Rastrick has bravely decided to take on World Fitness Centre's TribeFIT training programme with the aim of getting in shape in just six weeks.