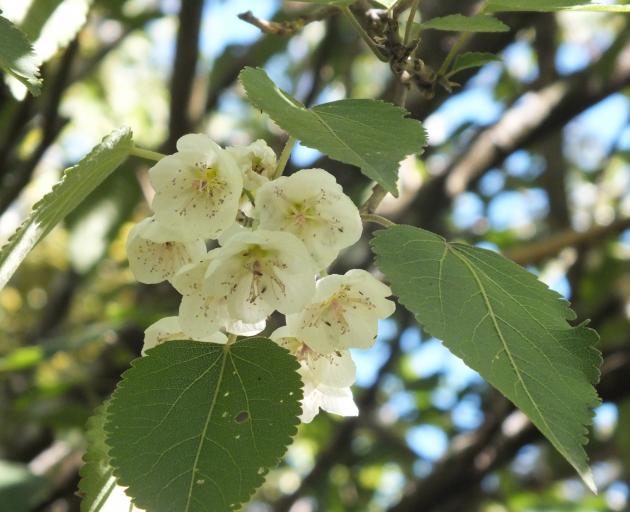 There are several factors that affect leaf colour, some relating to the season, as trees react to the amount of soil moisture and temperature as well as shorter days.

Before the leaves fall, they age, pigments in them break down and this is what produces those marvellous golds, scarlet and crimson in some species. 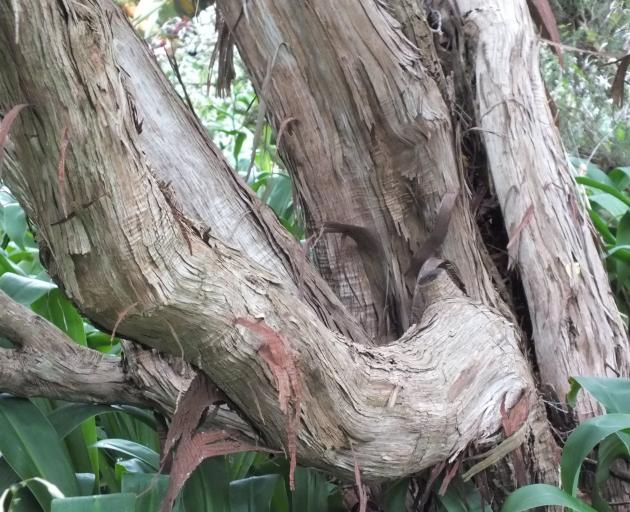 Olearia fragrantissima is one of two deciduous tree daisies.
Most of the deciduous trees in this country are exotics, mainly brought from the northern hemisphere.

We have only 11 species of fully deciduous native trees and shrubs although, to confuse things, some among them have juvenile forms that tend to hang on to their leaves, a bit like a security blanket, perhaps. 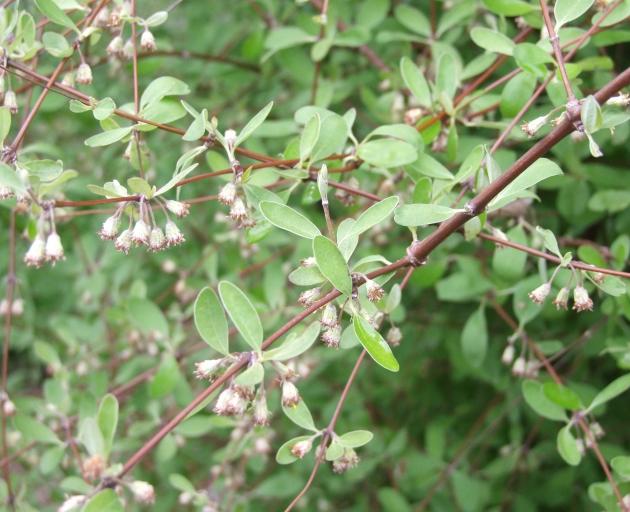 Mingimingi and three of those four tree daisies are now endangered in the wild, the exception being O. odorata, one of two scented tree daisies.

Our tree daisies tend to be largely ignored by gardeners, which is a pity as they are useful shrubs for almost every situation. As their names suggest, O. fragrantissima and O. odorata have scented flowers. Given a choice, I’d opt for O. fragrantissima as numbers are declining in the wild and by growing threatened plants, gardeners play an important role in their survival. 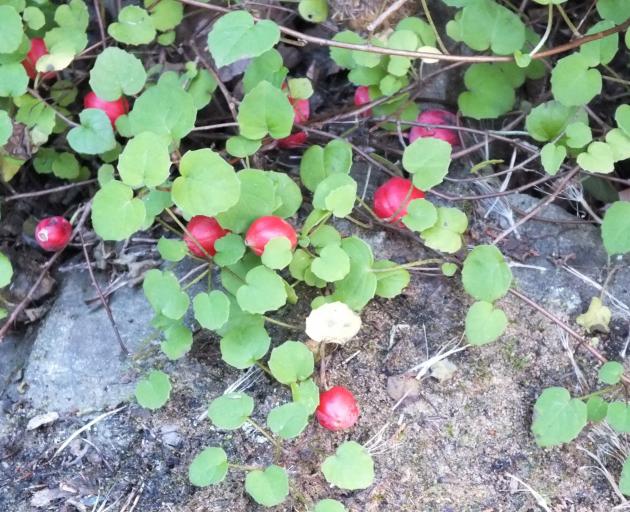 Cute little Fuchsia procumbens tends to lose its leaves in winter if grown in an exposed place.
Another rare olearia, O. fimbriata, is one of 11 native species that come into the rather awkward category of semi-deciduous.

This interesting plant was not identified as a separate species until 1998 and is confined to Otago, Southland and parts of Canterbury.

The extent to which semi-deciduous trees and shrubs shed their leaves varies according to where they grow, with plants in cold or exposed sites more likely to bare their limbs and hunker down for winter. 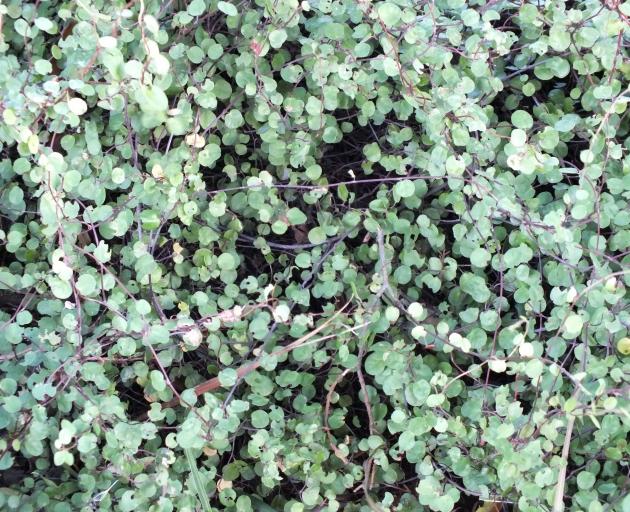 Semi-deciduous Muehlenbeckia complexa.
There are two creeping fuchsias on this list, F. perscandens and the more familiar F. procumbens; as well as Coprosma virescens and makomako or wineberry (Aristotelia serrata).

Wineberry, a fast-growing small tree, gets its common name from early Europeans’ use of its fruit to make wine. More importantly, it is a winter food for tui, kereru and bellbirds (makomako).

Any rich fertile soil suits wineberry, but the drawback for the gardener on a small property is that there are separate male and female plants, so when popping in a seedling, there is no guarantee of fruit. 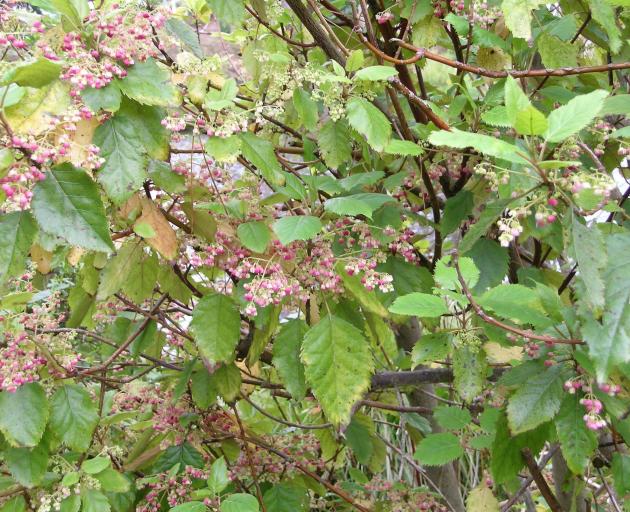 Spring flowering wineberry (Aristotelia serrata) may drop its leaves in autumn.
On the semi-deciduous list, there are also a couple of unappealing inclusions, bush nettle (Urtica ferox), long considered our most dangerous native, and toxic tutu (Coriaria arborea var. arborea). Incidentally, each of these poisonous plants has several other evergreen relatives, also toxic to humans, so it is important to be able to identify them all.

Then comes the oddball, kowhai, and I’ve finally learned why a large-leafed Sophora tetraptera I had in a previous garden dropped its leaves when it flowered. Apparently, some of this species and also small-leafed S. microphylla trees are brevideciduous, the term for this odd approach to getting rid of old foliage. 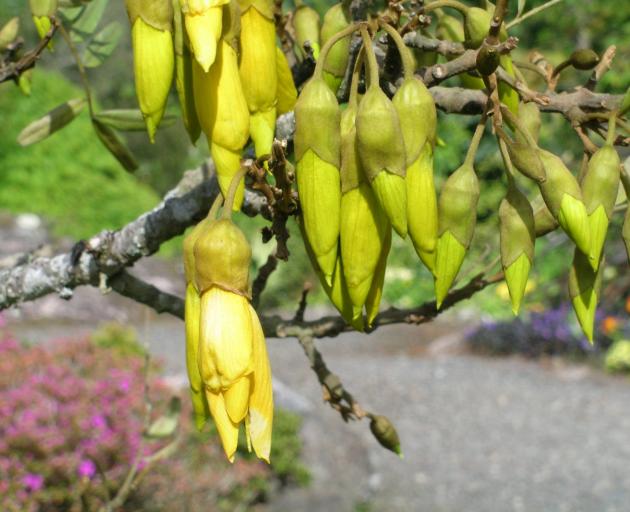 Kowhai is brevideciduous, meaning the leaves drop in spring when the tree is flowering.
Our native deciduous, semi-deciduous and brevideciduous (I love that word) plants may lack the flamboyant autumn golds and scarlet of introduced trees and shrubs but they deserve consideration, especially those that provide winter food for birds.
Comment now