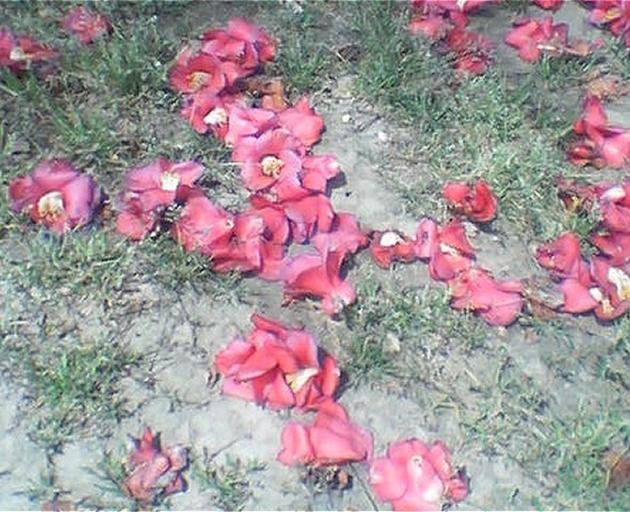 Ochi tsubaki is the specific Japanese term for fallen camellia flowers, which have frequently inspired poetry and even deliberate breeding for the effect. PHOTO: WIKIMEDIA
When Franz Boas, the early American anthropologist, wrote of the many words the Inuit have for snow, he probably had no idea he was sparking off a century-long debate.

The idea that language shapes how we see the world is fascinating, and as no-one has more gardening terms than the Japanese, here are four words for concepts you may have never thought about, but could help you see your garden in a different light.

Miegakure is the practice of partially obscuring some garden elements from view, creating a sense of tension, forcing the viewer to move around the space to explore it, either physically or visually.

While in most gardens plants are arranged by height to create a sense of order and scale, breaking this regimentation by putting one or two tall ones in the foreground can add visual depth and create a sense of expectation for what may lie around the corner.

Ochi tsubaki is the weirdly specific word for fallen camellia flowers, referring to the beautiful carpet created by the plant’s habit of shedding its whole blooms under their bushes.

It’s the subject of many a haiku, and breeders have even prioritised the trait in the development of new varieties to create this "accidental floristry" in the mossy undergrowth.

I love the idea of spent flowers being as important a garden design feature as those in full bloom. If you want to create your own fallen flower carpet similar to one provided by camellias, then stewartia, rhododendrons, wisteria and even cherry blossom are also great candidates.

Ma refers to the space between objects, or the pause between thoughts, words or events, that helps define these and give them greater meaning. Like punctuation in a sentence, these might seem inconsequential at first, but without them the arrangement can lose crucial nuance, if not its entire meaning. I think the closest we have to this in English is "dramatic pause".

If you don’t have a bare patch of pebbles, lawn or moss in swathes of groundcover to allow the eye to pause, or gaps between trees or sculptures to frame views, schemes can seem saturated, flat and boring. So knowing what to add to a scheme is often secondary to knowing what to take away.

Nebari is the base of a tree trunk where it flares out into roots. Mainly used in the world of bonsai, it’s also used for shrubs in small gardens.

Horticulturists have all sorts of innovative ways to accentuate these, creating much more naturalistic, aged effects.

The simplest way is to prune out leading tap roots at planting time, which encourages lateral root formation, then splaying the remaining roots out in a shallow planting hole.

Some growers will even place a slate slab under the pruned tap root to further ensure this. On established trees, you can tease away the first few centimetres of the soil’s surface each spring to slowly expose the roots around the trunk.

I know when we think of Japanese gardens, it is often of austere raked gravel or theatrical red lacquered pagodas and bridges, but when you look deeper there are many Japanese concepts that are as universal as they are ingenious.