Clear the clutter and get a life 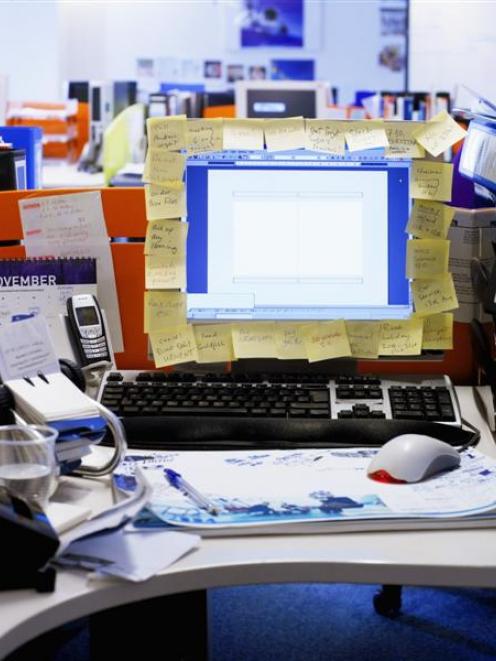 Piles of paper can be a problem at home or work.
Becoming more organised does not need to be all hard work, says professional organiser Wendy Davie. As she tells Kim Dungey, an accidental organiser makes being organised so easy it happens by accident.

Another only realised she had a problem when she found unopened bags of shopping with receipts five years old.

Davie, author of a new book called The Accidental Organiser, has heard every excuse imaginable from people reluctant to clear their clutter.

But she claims that if those people put as much effort into finding a solution, they would be halfway to a more organised life.

The 42-year-old is not a naturally organised person: "My mother still laughs when I tell people what I do for a living because she saw my bedroom when I was a teenager".

But she says she has found simple ways to make life run more smoothly and as the book title suggests, it now happens almost by accident.

One of the biggest myths about decluttering is that people need to be tidy to be organised, she says in a telephone interview from her home city of Christchurch.

"If you can lay your hands on what you want, when you need it, and the mess doesn't bother you, who cares? Some people work well when they've got stuff around them."

But the idea they have to be impeccably tidy is not the only thing that puts people off becoming more organised.

Other deterrents are thinking the clean-up will take much longer than it really does, and not knowing where to start.

The key, she says, is to keep only what you need and love - "and you don't need nine toasters".

Davie uses the "divide and conquer" method for areas such as spare rooms, garages and offices, where junk tends to accumulate.

This means looking at each item in the room, only to immediately decide if it belongs there or not.

Make a pile of items that belong, take the rest away to another space and remove all rubbish as soon as the task is completed.

The important thing is to do only one area at a time and to not get distracted by worrying about where objects belong and taking them to that space, she says.

Once the first phase is completed, people begin to see the way clear and then they can make decisions about the items that are left.

At this stage, there is no room for an "I will decide later pile".

If you have to think for longer than 20 seconds about whether to keep an item, you are trying to justify holding on to something you do not really need.

Once you have decided to keep an item, you must find a home for it, Davie says, adding it is best to store things in logical places and to store like with like.

On the other hand, unwanted items can be sold, donated or recycled.

To make the process fun, Davie suggests enlisting friends to help and rewarding yourself at the end with a treat such as a massage or a dinner out.

Shopping is not a recommended reward, since people are too likely to buy more things they neither need nor love.

She also recommends making a play list of upbeat music and turning it up "really loud" while you declutter.

Her own favourite is anything by AC/DC.

Davie says there are many reasons for clutter, from people not having enough time to sort their "stuff" to an inherent urge to keep everything "just in case".

The client who found unopened shopping bags and five-year-old receipts "hated" her house and would constantly go to the shopping mall to get away from it.

"Saying to her she was not allowed to buy anything except essential items until the [decluttering] project was finished, was a real challenge.

"The whole job took three to four months, with me going there weekly, but when it was finished, she didn't shop any more, anyway. It was just a bad habit that needed breaking."

Another client, "Pru", explained that her daughter would not allow her grandchildren to visit until she had sorted her house out.

It transpired that most of the clutter was not even Pru's but belonged to the daughter who had complained.

However, more common than this are clients who have lost important documents at work or people whose spare rooms have become junk rooms and have friends coming to stay.

Davie says there can be big financial rewards from being organised.

Often, during a decluttering session, people discover things of sentimental or monetary value.

"The emotional benefits can be seen in what people say afterwards - `I can't believe how much clearer my life is. I feel so much lighter. Things are simpler. I get so much more done'."

Treating your time with respect is another way to achieve more, says the mother of three.

"You can have clutter in your schedule and try to do more than you can possibly do in a day. So you need to decide what you really need to be spending your time on and put those things first."

"The first thing in my diary at the start of the week is stuff for me, whether it's going to the gym or a movie . . . People are horrified that I put that in before family stuff but if I'm not looking after myself, I ain't going to be around to look after the family."

She also believes most people should use only one diary for both personal and business appointments "because if you have more than one, you'll run late, miss appointments and peeve people off".

Sometimes, though, even an organising guru is caught out.

Recently, while waiting to board a flight to Sydney, Davie discovered she had left her mobile phone in the centre console of her car.

The telephone, also her planner and notebook, is something she "likes to have handy".

Staff from the Air New Zealand international lounge took her car keys, followed directions to her parking spot and were able to retrieve the mobile, she says.

Wendy Davie's business, Totally Organised Ltd, was one of New Zealand's first professional organising services. She is a founding member of the Australasian Association of Professional Organisers (AAPO) and is the current president.