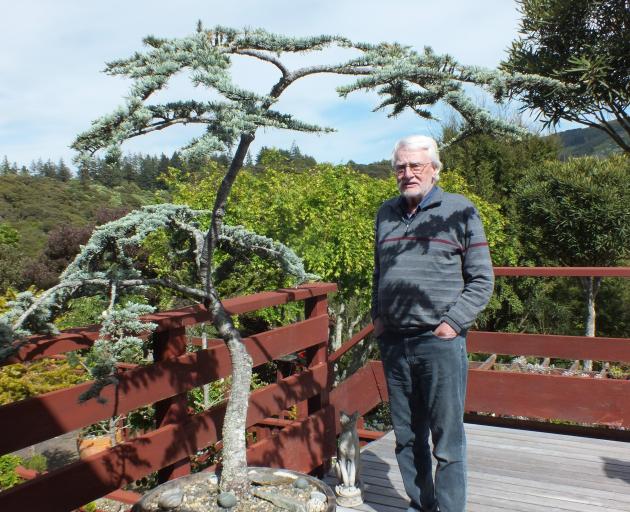 Brian Tidmarsh by the blue cedar that landed him in hospital. Photos: Gillian Vine
Gillian Vine sees how a garden has developed in 14 years.

How time rushes past. I couldn't believe it was almost 14 years since I'd last visited Glenmorangie, in Dunedin, and wondered why I'd left it so long. 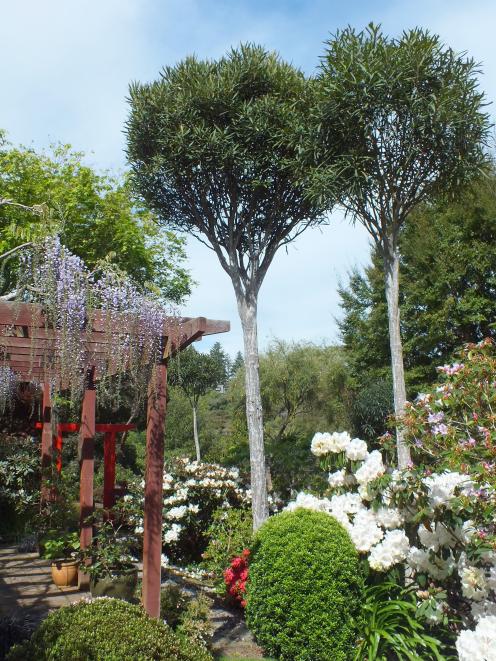 Gaps have been made to create garden "windows".
In 1980, Brian Tidmarsh and his wife, Nancy, bought a property close to Ross Creek reservoir. The house sat on a small flat area close to the street, with the land behind it dropping steeply.

"It was very unpromising," Brian says of the garden.

Not that the hillside could be called a garden. A rubbish dump was a better description, as it was littered with old TVs, washing machine remains and the rusting corpses of unidentifiable machinery.

Lugging the rubbish uphill for disposal must have given the couple nightmares, but Brian had a vision of creating a vale of tranquility, hence the name Glenmorangie.

There were some native trees clinging on and as the rubbish and weedy plants were removed, not only did they appreciate the improved conditions but they were supplemented with other shrubs, trees and ground covers. Paths and steps were added, as well as rails for safe descents.

Near the top, natives and rhododendrons mingled in a transitional area before exotics took over, including more rhododendrons to give colour from July to late January. 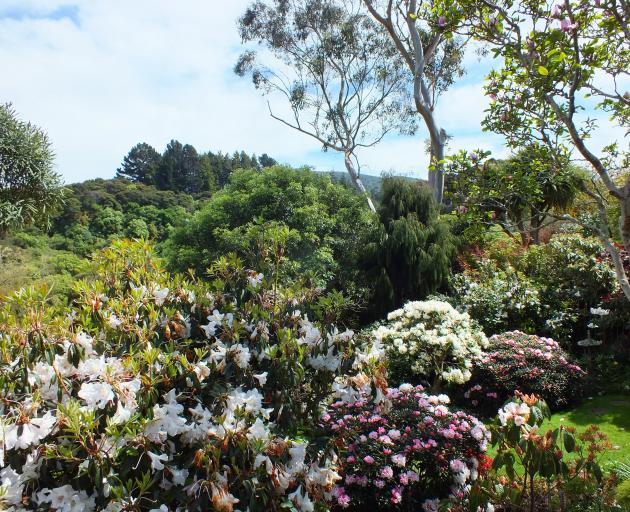 The outlook from Glenmorangie is to bush-clad hills.
Nancy planted roses close to the house, a small quartered vegetable garden was added and a wisteria and kiwifruit grown over the pergola. 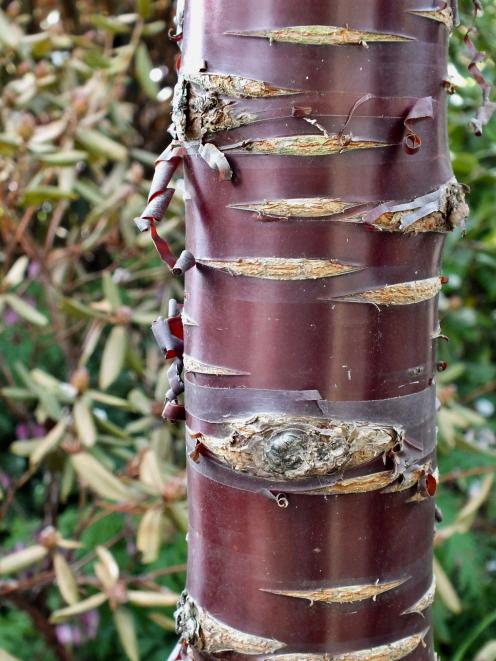 Prunus Southern Gem was planted in memory of Nancy Tidmarsh.
The new-look garden was widely admired and the Tidmarshes signed on to the Dunedin Open Gardens scheme.

Then 10 years ago Nancy died and Brian had to decide whether to stay or move. Although the garden was a lot of work for one person, he opted to remain at Glenmorangie and to make it less labour-intensive by developing "areas that manage themselves entirely".

The roses - "a lot of work" - have gone and so have the vegetables in the brick-edged bed, replaced with azaleas.

Now the overall trend is "much more towards natives", with Brian taking out some trees and heavy greenery to open up windows of views across the valley to a bush-clad hill. More lower-growing natives have been added, including astellias, smaller cordylines and Marlborough daisies. Non-native Cardiocrinum giganteum is very much at home, self-seeding freely and producing tall stems of scented, lily-like flowers around Christmas time. Brian also grows another Himalayan native, Bailey's blue poppy (Meconopsis betonicifolia), raising seedlings each year to enhance the woodland.

A totara that had to be removed was replaced with a kauri. Growing kauri in the South could save this native species, as so far there has been no sign of the fatal kauri dieback that is causing so much concern in the North Island, Brian says. 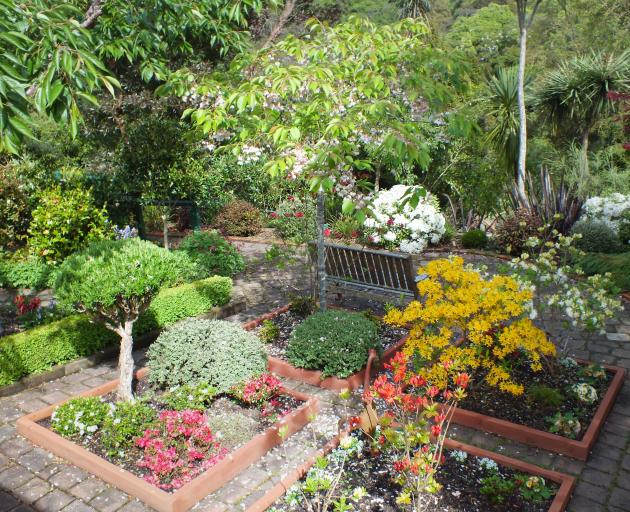 Azaleas have taken the place of vegetables in the four small beds.
He has not turned his back on his early love, rhododendrons, and points with pride to a R. macabeanum that flowered for the first time when it was 20 years old, bloomed again in years 27 and 30, and again this spring.

Another rhododendron grown from seed took "many years" to flower, reminding gardeners of the need to be patient if they propagate from seed.

Fourteen new maples have been planted "so the garden's got lots of colour in autumn". Among them is Autumn Moon, which has excellent spring foliage tones, too,

Another interest is bonsai and Brian says: "I have been slowly building my small collection."

Repotting a large bonsai, a blue cedar, landed him in hospital for five days, not from straining his back, but because he contracted Legionnaires disease from the potting mix. As a result of this extremely unpleasant experience, he urges gardeners to heed the warnings on bags of mix.

Aside from that, he is happy with the garden, saying: "It's sort of achieved what I set out to do; that is, to blend the rhododendrons with the natives.