Growing in a mini-greenhouse 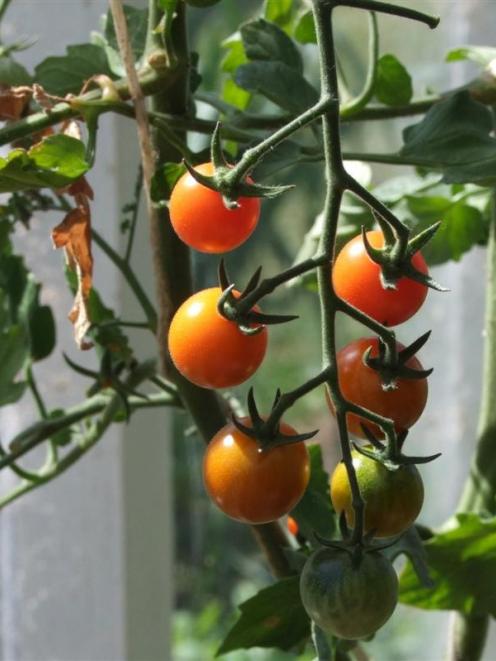 Tomatoes can now be planted in unheated greenhouses. Photo by Gillian Vine.
Vegetables

Given rich soil, zucchini, marrows and pumpkin are easily grown in the home garden, although in cooler districts pumpkins need a hot, dry summer to do well.

Bush marrows, such as Cocozelle di Napoli, require less room than the trailing types but zucchini are more popular than marrows, so seed of the latter can be difficult to obtain.

Sow the seeds now in pots or seed boxes.

Mini-greenhouses - a little like an old-fashioned cold frame - are ideal for these tender vegetables, as is a bottomless box, with a square of glass set over the top and placed in the warmest part of the garden.

Plants can be put in their permanent place from the end of the month, or once the likelihood of frost has passed.

When fruits form, liquid manure will encourage good growth. Watering is needed only when the soil is dry in the plants' earlier stages.

Celery can be sown in the same way as marrows or pumpkins.

Trenches can be prepared now for planting out celery early in December.

Dump plenty of manure in the bottom of the trench and top with soil but leave the surface 5cm to 10cm lower than the surrounding garden to help retain moisture, as celery will quickly go to seed if the ground dries out.

Violets do best in partial shade with rich, heavy soil.

Herbaceous perennials, such as michaelmas daisies, can still be increased by taking side growths with a few roots attached.

Hardy annuals can be sown outdoors this month.

Little Sweetheart is one of the smallest, growing to 25cm, making it suitable for bedding, pots and hanging baskets.

The soil for sweet peas should be well limed and the ground worked to a fine crumb.

Phosphate worked into the soil (30g per square metre) will give the seedlings a good start and a sturdy root system.

Lawns that have become patchy because of grass-grub damage or the removal of weeds on a large scale can be brought back to order with a dressing now of one part superphosphate, three parts sulphate of ammonia mixed and spread at the rate of 30g per square metre.

Apply this mix now and in early autumn, as growth restarts after summer.

Mossy soil can be dressed with the same mixture, with the addition of a half part of sulphate of iron to suppress moss.

Some damage to the leaves of nearby grass will appear, but recovery is quick.

Dwarf annuals for a rockery or the front of garden beds include Phacelia (blue shades), Nemophila (blue), Linum grandiflorum and Limnanthes (yellow).

Tomatoes can be planted now in unheated greenhouses.

The ground or container mixture does not need to be over-rich, as fertilisers applied when the fruits set will provide a heavy crop to the ripening stage.

The soil must be free from disease, though, and growing tomatoes in pots or bags of new mix each season is recommended.

In autumn, put the soil on the vegetable garden. Avoid overwatering young tomato plants during the first few weeks, or their roots may be damaged.