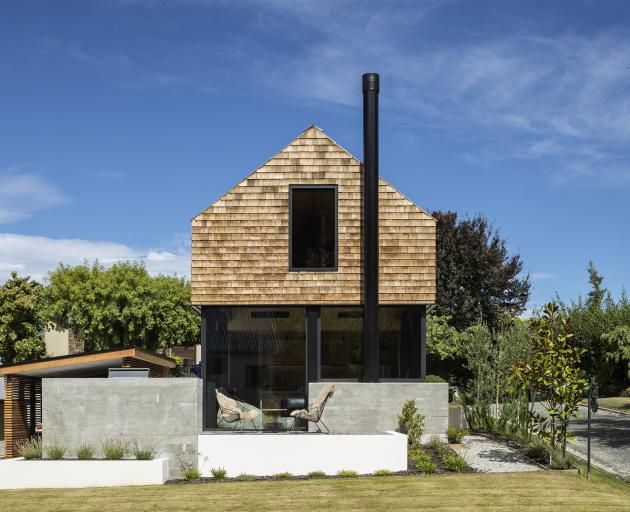 Staying in a compact holiday home in the mountains, the owners of this property saw that a small, carefully designed house could be comfortable and pleasant to live in. PHOTOS: SIMON DEVITT
It was on a Japanese ski trip that the owners of this Wanaka house came to appreciate the efficiency of small spaces. Kim Dungey reports. 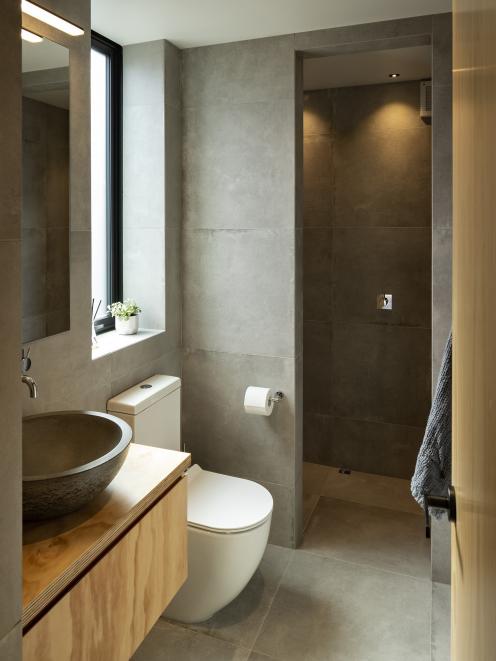 The wet-room style of the compact bathroom is reminiscent of a Japanese spa, with floor-to-ceiling, stone-look tiles.
Building 8000km away, with borders closed and countries in lockdown, would challenge the most determined of homeowners.

But for a former Dunedin man and his wife, now living in Singapore, the result has been worth it.

Unable to visit their Wanaka site, Chris Stewart and Vicky Windsor found that online meetings and trust in their architect and builders were crucial. Decisions were made with the help of Skype and email.

The couple were last able to visit their holiday home in February last year, when it was not much more than a shell. The following month, as builders began adding its distinctive shingle cladding, New Zealand entered Alert Level 4.

"Building materials and building works were delayed due to the lockdown but since we couldn’t travel anyway, it wasn’t something we stressed over," Mr Stewart says.

"With my grandma living next door and my family visiting regularly, there was no shortage of updates." 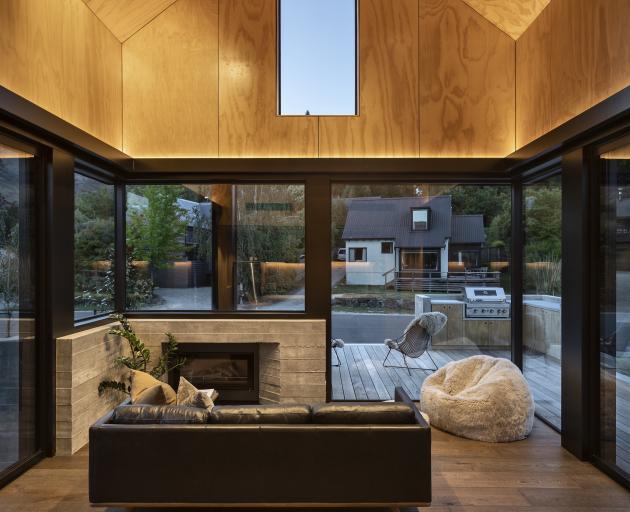 The living area feels bigger than it is, thanks to the extra height for the mezzanine and the glazing that extends to the floor, giving a seamless connection with the deck outside.
Even now, they are still unsure when they will be able to see their completed home for the first time. 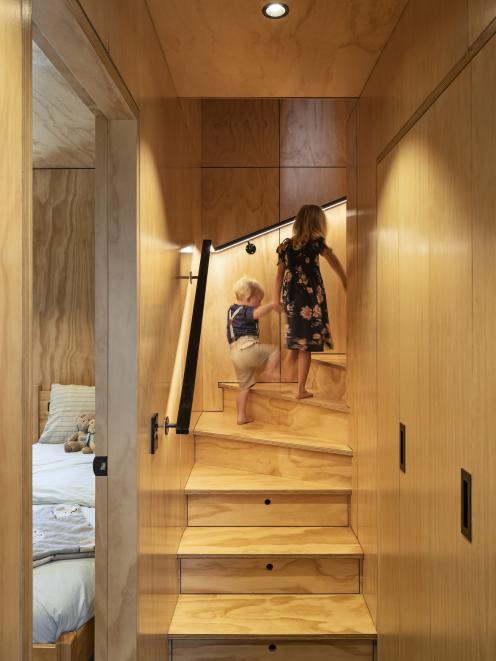 The built-in storage includes hidden cupboards and drawers within the steps of the stairs.
Pre-Covid, the couple and their children visited Wanaka once or twice a year, staying in a house on the site that until recently was home to Mr Stewart’s 91-year-old grandmother. However, they always liked the idea of having their own place and their children maintaining a strong connection with Wanaka.

Sugi House (sugi means cedar in Japanese) was built on a part of the 1084sq m section which previously accommodated the cricket pitch and trampoline.

"We were after a simple, eco-friendly lodge, which would complement the main house, but add a modern touch," they say.

"It needed to be something that was cosy in winter, cooling in summer, that would blend into the street and mountain backdrop and be easy to maintain.

"On one of our ski holidays to Japan, we stayed in a little two-bedroom ski lodge for a week. It was very efficiently set out, as only the Japanese could do, and we realised a family of five could comfortably live in a small house if we were smart about making maximum use of the space." 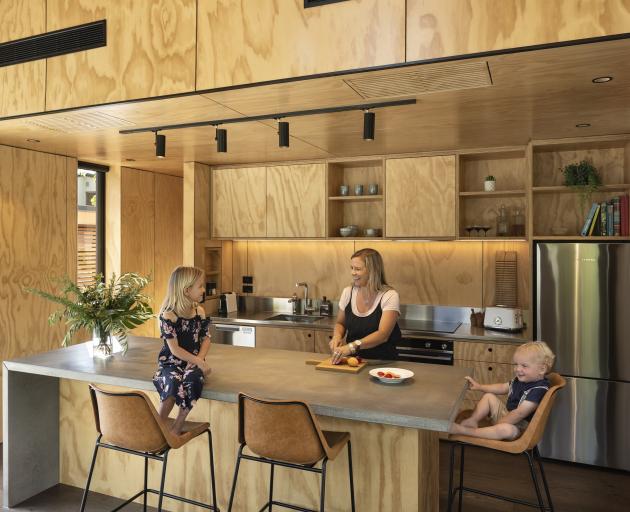 Materials in the house were limited to timber, black metal and concrete, with stone-look tiles used in the bathrooms.
After seeing Kirimoko Tiny House — a 30sq m home by Condon Scott Architects — the couple engaged Barry Condon to bring the vision for their holiday home to life.

To Condon, delivering on a Japanese aesthetic meant creating something that was simple and unobtrusive.

The 96sq m property is not a "tiny house", but it does contain key elements commonly associated with that style of living, including a simple form, a mezzanine level and clever storage solutions. 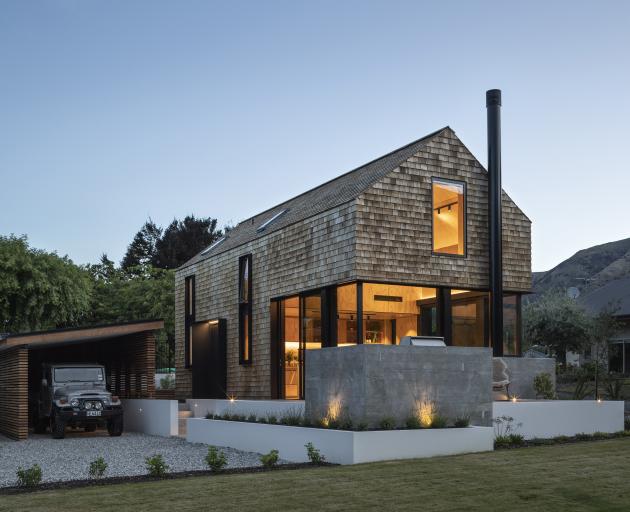 As the house faces the street, glazing is restrained and aimed towards views to the west of Mt Roy.
The lower floor contains a double-height living and kitchen space, separated from the children’s bathroom and bedroom by a staircase. Upstairs is a double bedroom with en suite, an office and storage.

Condon says there are no walk-in wardrobes, oversize bedrooms or sprawling living spaces (there is also no television).

"Rooms are compact, yet still make for comfortable living. There are shoe racks built into the walls, storage tucked away behind walls, drawers under the stairs. The bathrooms are small, tiled wet-rooms with a shower." 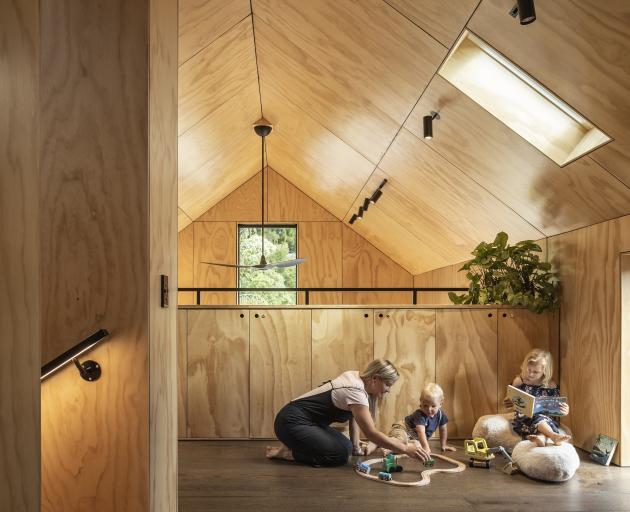 The interiors deliver on the requested minimalist look, with black fittings and joinery contrasted against timber linings, a sculptural ceiling fan and flush cabinetry.
To increase the feeling of space and continuity, materials were also pared back to a bare minimum.

Interior walls and ceilings are clad in ply which is broken up by negative detailing, creating a linear design feature out of the joins. On the outside, cedar shingles are used on the roof and walls.

"It’s not a typical cladding in Wanaka, but it does tie in with the style of the house and the alpine environment," Condon says.

"Over time ... you’re going to get variation and it’s going to have this lovely dappled quality to it." 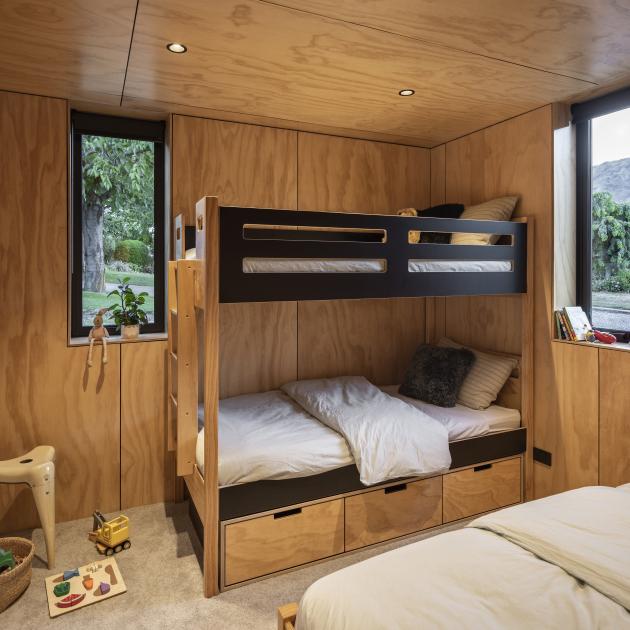 A lot of work went into lining the sheets of ply up with window and door heads.
The house was built by Christie Brothers Building from structural insulated panels (SIPs), which were taped, sealed and wrapped in a secondary layer of building wrap plus plywood to maximise thermal efficiency.

Due to the high level of insulation and the small footprint, a wood fire provides enough heating to cut through even the chilliest of winter days.

The board-marked concrete fireplace is thermally broken from the floor slab and from the windows that seem to rise up through the middle. 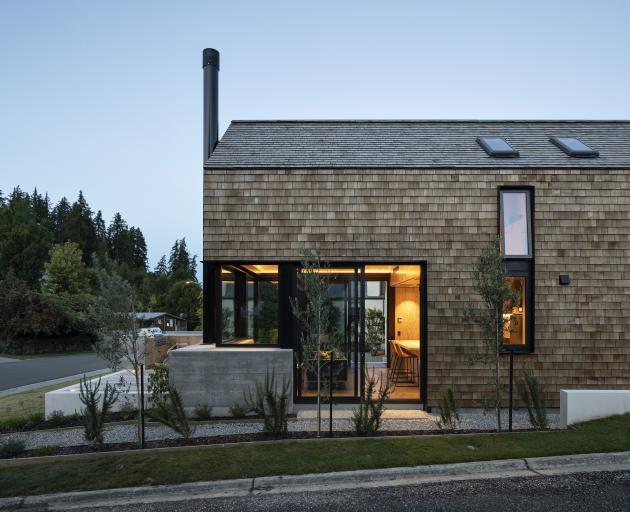 The architects say that smaller homes are becoming more popular in Wanaka due to smaller sections becoming the norm and the increasing cost of building.
The owners say they love the contrast of the cedar shingles against the black window frames and chimney, as well as smaller touches such as their concrete bathroom basin, black sculptural fan and concrete kitchen bench-top.

Initially, they budgeted $500,000 to $750,000 for the build but they quickly realised it would need to be at the top end of that range to get the quality they wanted.

"We tried to make sensible decisions along the way, choosing quality local products and not cutting corners on what we saw was a long-term investment."

"We are absolutely delighted with the result, although a little sad about not being able to be the first to live in it." 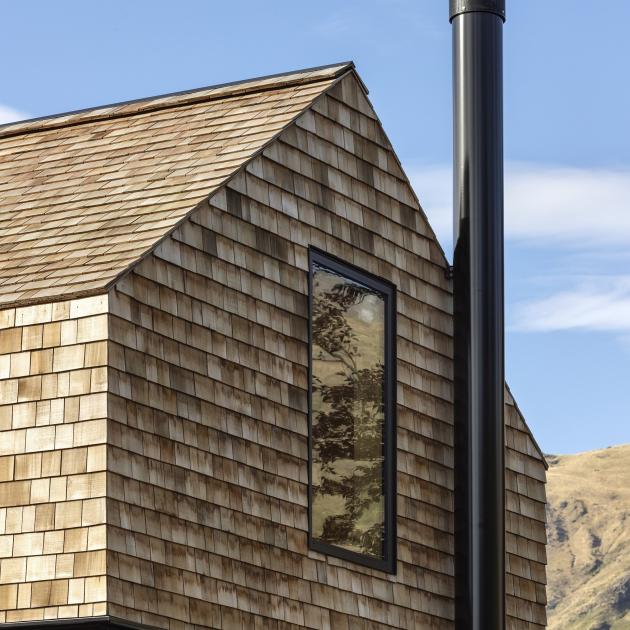 Using a single material on the roof and walls made for a clean and seamless exterior. The house was built from structural insulated panels and wrapped, taped and flashed before the cedar shingles were applied as a ‘‘second skin’’ — effectively adding a rain shield.
While they continue to work in Singapore — Mr Stewart for Westpac and Ms Windsor, for German software corporation SAP — a tenant is "babysitting" the house and keeping an eye on the garden. Given current quarantine requirements, they plan to wait until a travel bubble opens with Singapore before heading to Wanaka themselves.

Even then, there is no guarantee that their three children will choose to stay

in the home that was more than a year in the making, they joke.

"The kids seem more than happy to stay in the big house next door with their cousins — and a TV."