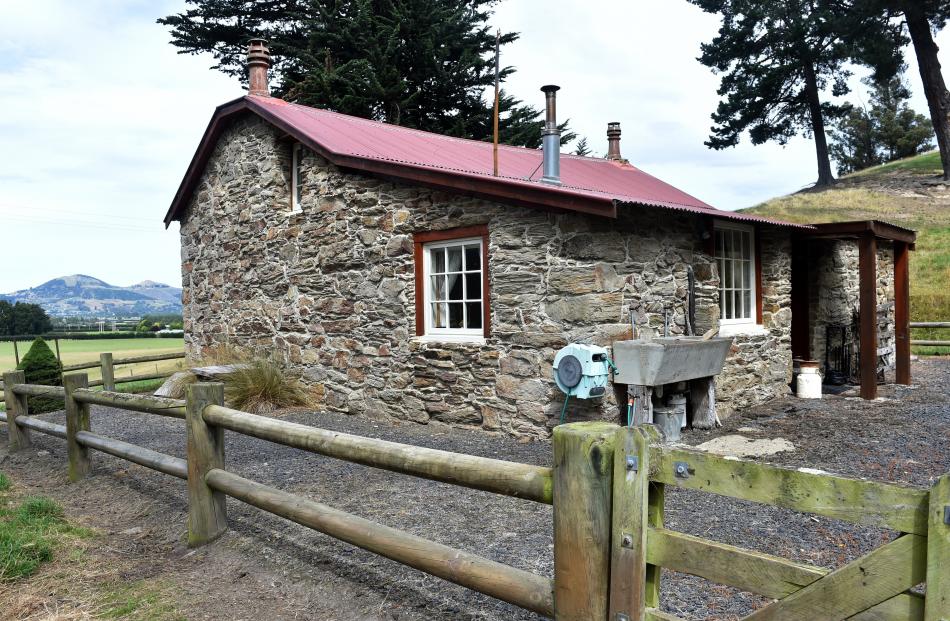 The back wall was on a lean so the McAlwees had it reinforced. Porches added at the front and back also add strength to the walls. Photo: Peter McIntosh 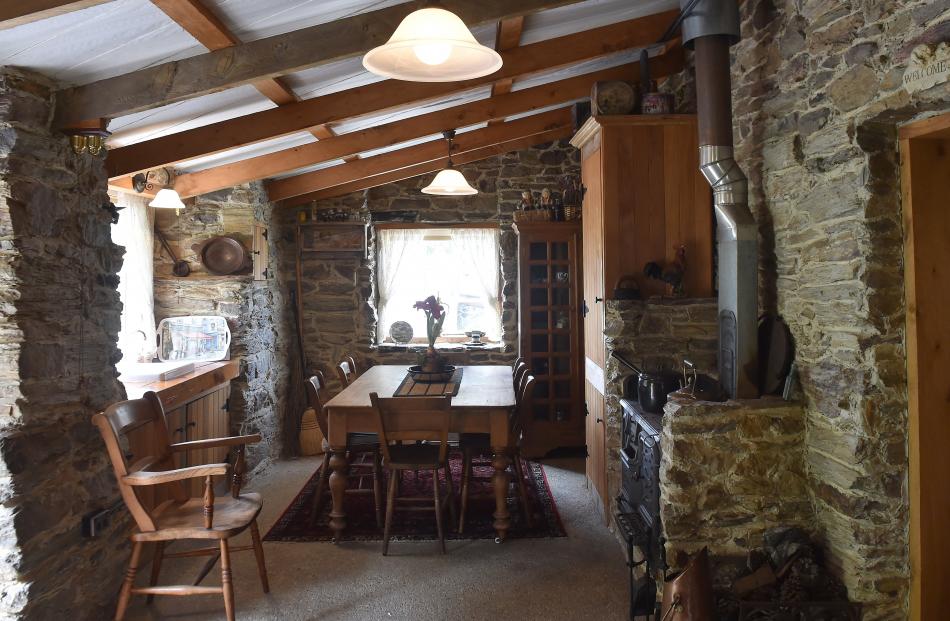 The tall cupboard in the kitchen-dining area holds the hot water cylinder. The Shacklock range beside it is an addition as the original one was broken. Photo: Peter McIntosh 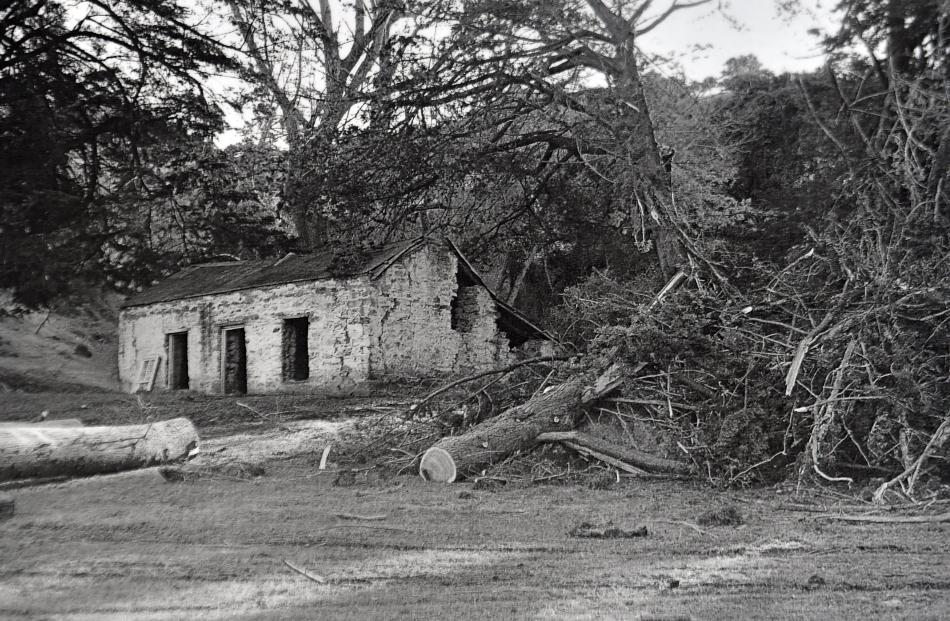 Seven macrocarpas were felled because they were leaning over towards the cottage, which was in serious need of repair. Photo: supplied 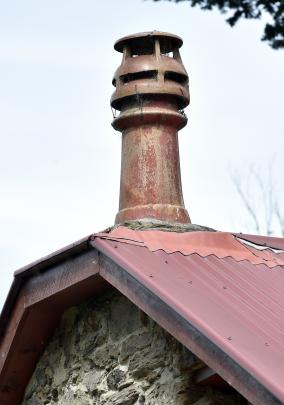 The chimneys were repaired but are no longer used. Photo: Peter McIntosh 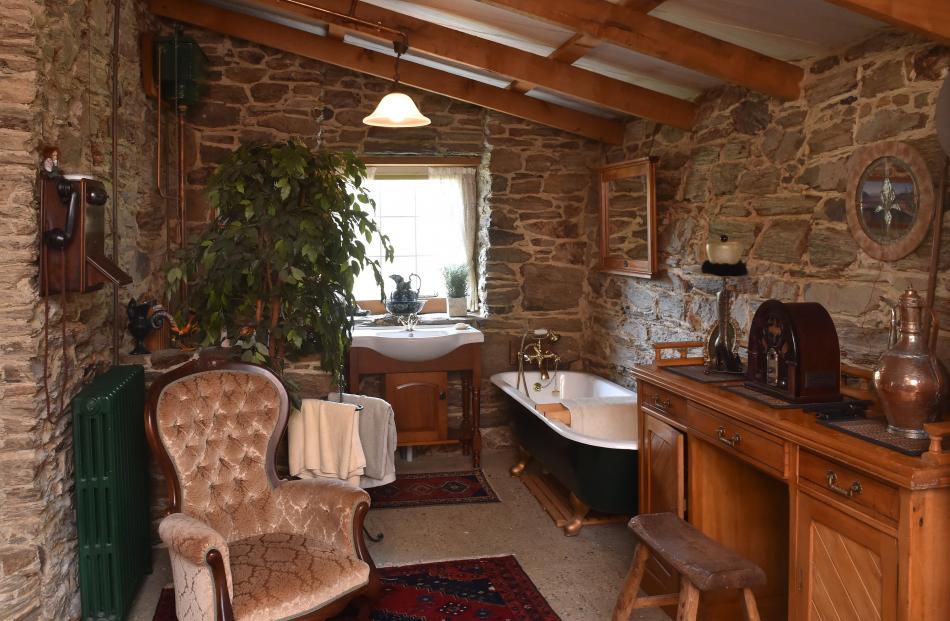 The bathroom has a claw-foot bath and a pull-chain toilet (behind the plant). The old telephone above the radiator is just for show. Photo: Peter McIntosh 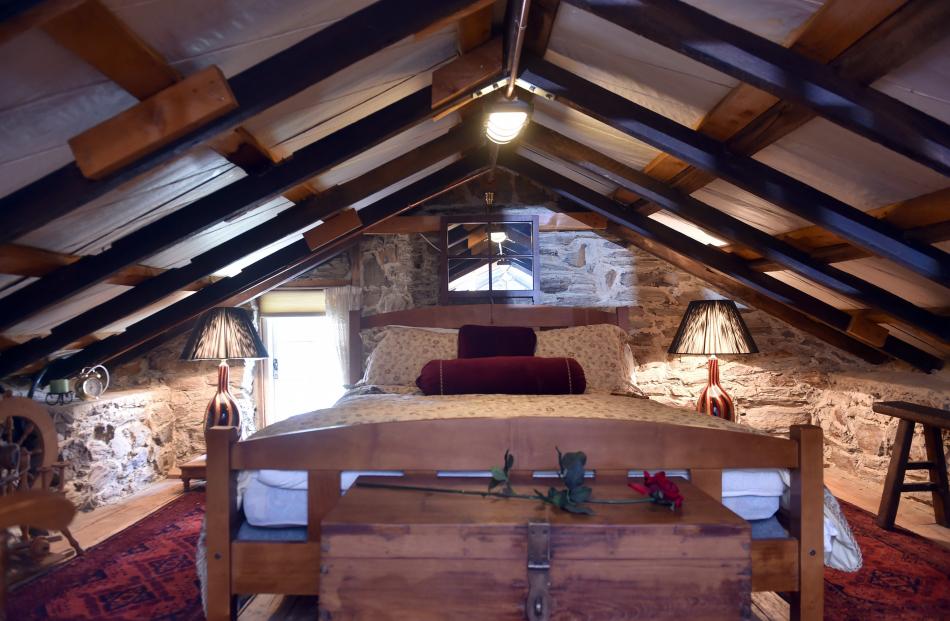 The stud upstairs is only about 1.5m at its highest point Photo: Peter McIntosh 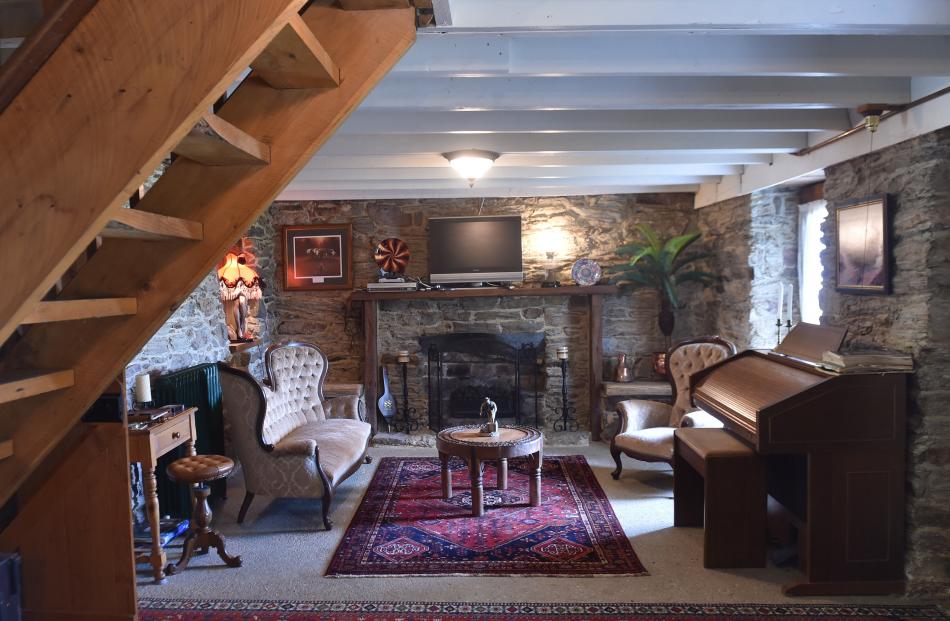 One end of the sitting room. Photo: Peter McIntosh
A reminder of a pioneering way of life, this stone cottage near Mosgiel almost didn’t survive. Kim Dungey reports.

It’s hard to believe this character-filled cottage was once a crumbling ruin, with rain driving through the roof and stock sheltering inside. But that is exactly the state it was in when North Taieri farmers Kevan and Lynette McAlwee bought the block on which it sits 22 years ago.

Kevan and Lynette McAlwee spent a year restoring their early 1860s cottage. Photo: Peter McIntosh
Mr McAlwee says it was the 65ha of land near their home farm, not the abandoned building, that they were interested in. In fact, cattle continued to take cover inside until he decided to take action 15 years ago.

"The roof was coming down and rain was starting to ruin the clay [pointing] and I thought, ‘Jeez, I should be looking after this.’

"I thought I’d just put up a roof and put in some doors and windows. But I ended up doing a bit more."

Built from local stone in 1861 and set on a rise above a winding stream, Glen Lyon cottage has sweeping views across the Taieri Plain towards Saddle Hill.

The front door opens into a surprisingly large sitting room with a fireplace at each end; at the back are the kitchen, dining area and bathroom. Stairs off the sitting room lead to the only bedroom, where three beds are tucked under a low, angled ceiling.

The first job was to remove the macrocarpa trees that were threatening the house and to mill the timber for use in its restoration.

Mr McAlwee then dug out the manure, which was almost up to the bottom of the window spaces, and put in a concrete floor. A small part of the original wooden floor remained but was damaged from people starting fires inside the building. 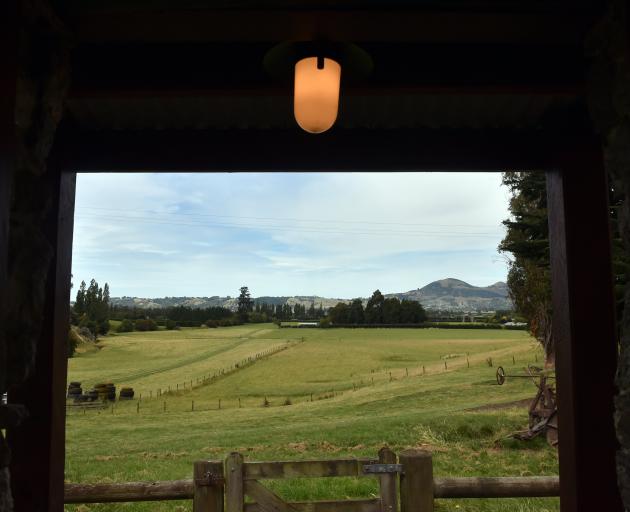 The view from the front door. The area was originally known as Stewart’s Gully after the home’s original owner, Duncan Stewart, a shepherd for a local landowner. Photo: Peter McIntosh

The clay pointing was replaced with cement and the stonework was repaired and strengthened — luckily, he found more of the schist in piles further up the hill.

A new iron roof, along with second-hand windows, finally made the cottage weathertight again.He also installed a generator, a kitchen sink, electric lights and a flushing toilet.

The two open fires that tended to send smoke billowing into the sitting room were converted to gas and the coal range was connected to old radiators.

Some aspects of the build were not for the faint-hearted. Mr McAlwee says it took almost two years to find someone "game enough" to drop the "whopping" macrocarpas. Most people feared the trees would crash on to the cottage and when an inch-round wire rope broke as one tree was being pulled away from the house by a truck and two tractors, that seemed like a distinct possibility.

"But it was still standing and we had another go at it." 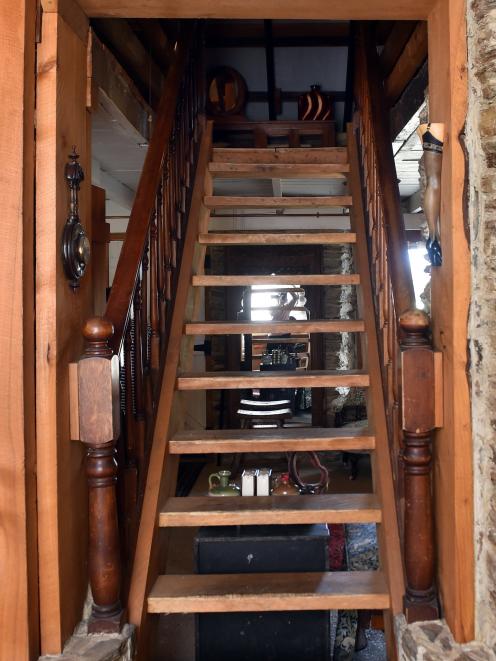 The stairs were made from macrocarpa milled on site. Photo: Peter McIntosh
The timber milled on site was used for reinforcing and replacing roof trusses, as well as for joists and bearers, repairs to the floor upstairs and a new stairway where there had previously been only a rope ladder.
The balustrade came from a ship because that was the only one that fitted the steep angle of the stairs.

Vintage items such as tins, bottles and vases came from family and friends while much of the furniture was found online. The curios include an old safe that holds a "gold nugget".

"A joker painted a stone and brought it up to us."

Gold figures in the history of the cottage - legend has it that the men who were building it for shepherd Duncan Stewart left it unfinished when they rushed away to the gold diggings at Gabriels Gully.

During the Great Depression in the 1930s, the abandoned house was used by swaggers, who tramped through the area looking for casual work and shelter.

Later owners allowed the Scouts to use it at weekends. The Scouts made improvements, even installing a shower, but gave up after repeated vandalism.

However, giving up was not an option for Mr McAlwee, even though he says he is "not really a history person".

"I knew that I wanted to finish it because lots of people start jobs, get halfway through and that’s it."

"He’s decorated the whole thing himself ... ," his wife adds.

"He picked the curtains, the bedspreads, everything. I just went along for the ride." 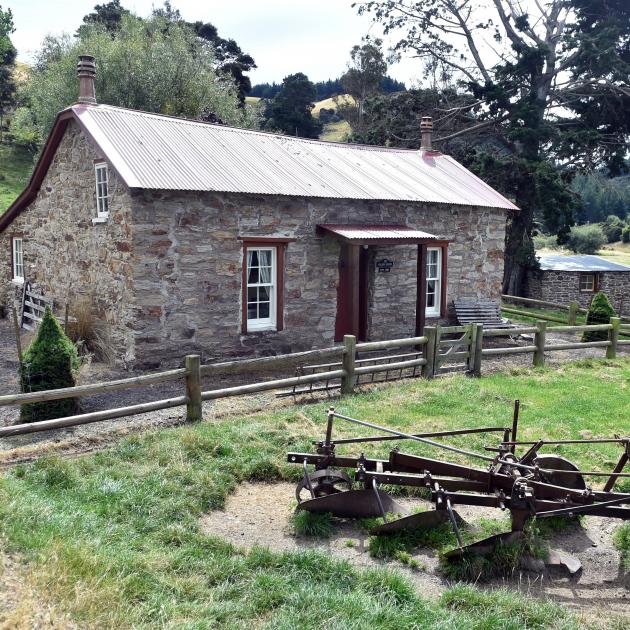 Glen Lyon cottage was built near the original road which had been surveyed around the foothills of the North Taieri hills to avoid flooding on the plain. Photo: Peter McIntosh
When the restoration was complete, they held a "shindig" for the friends and tradespeople who had helped. Occasionally, they drop in for a cuppa or stay overnight, cooking bacon and eggs on the cast iron range.

Seventy-three-year-old Mr McAlwee, who has two farms and a Mosgiel service station to run, says he has no time to retire or to think about what he has achieved on the property.

"I enjoyed doing it, but I’m a bit of a workaholic."

If the cottage had not been rescued when it was, it would almost certainly have been "a real wreck" by now.

"The main thing was to keep a roof on it, to keep it dry," he says.

"I didn’t do it to make money out of it or anything like that. All I wanted to do was to save it for people in the future."